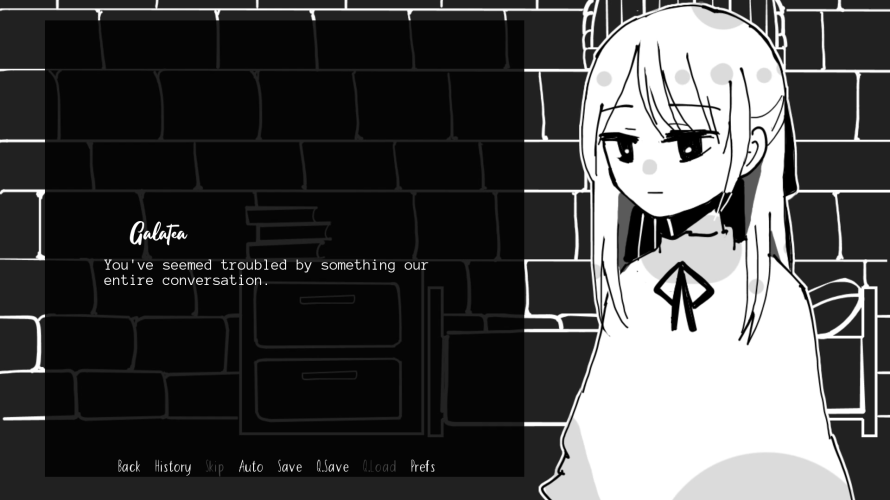 Novels have to end at some point, that’s just the way it is. We may not always agree with where/how they end, but there’s no way of changing the outcome of an already written story. Or is there? Well, Follower A‘s protagonist certainly desires such an ability in this gloomy short story…

Then again, who wouldn’t want to rewrite parts of a story they suddenly find themselves in, when their only point of entry in the timeline is… past the point of no return, to find that someone who holds a special place in your heart serving out a lifelong prison sentence. What if you could, you know, go back in time and rewrite events leading up to this heartbreaking unalterable outcome? What if, indeed.

It never ceases to amaze me just what a skilled writer can do with very few words, and Follower A is definitely an example of that, this particular visual novel likely clocking in at around 5 minutes for most with only a single ending and no choices to make throughout.

Five minutes might not seem like a long time, although it does give our ill-fated Galatea a chance to reminisce with Elise; a bitter-sweet conversation, truly, and one that does a good job of making the player feel for both girls, albeit for different reasons. And then… the story ends. As was written, so shall come to pass.

At least as far as the main narrative arc is concerned. But our protagonist in this story is a nameless follower of its villainess, Galatea, as also noted on the game’s page, meaning that this story is not about her. Not directly, anyway. Is that why she can see that the world in which she has awoken is in fact a novel? Why does she have a desire to change its ending? Will she be able to?

So many questions and I do not plan on answering a single one. Instead, give Follower A a go yourself, as it is after all free on itch.io and quite an interesting read.