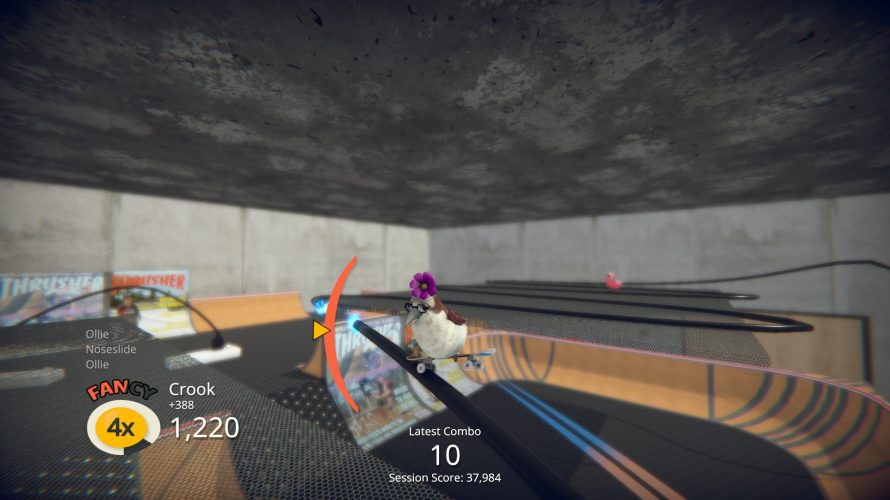 Before you lie the most unusual skatepark you’ll likely ever carve a line across, one exclusive to feathered creatures no less too, which means it’s everybird for itself. Except you’re not here to compete in SkateBIRD, so much as to make friends… by pulling off the sickest aerial maneuvers anybirdie has ever witnessed.

Unlike early video game heavy-hitter genre entries, SkateBIRD actually features a story, and a silly one at that: your Big Friend has given up on the sport, is stuck in a rubbish job, and is barely ever around to play with you anymore. So what’s a lonely bird to do? Turn into “a chill little skateboarding bird”, of course! Because somehow, that’ll be enough to put things back on track.

Things may start out simple, but the more you shred, the more friends you make, opening up additional parks, all bird-sized, of course, while collecting a ton of stuff. Sunglasses, hats, other clothing articles, and best of all… mixtapes with new tunes! Oh, and there are birds in need of assistance too. All over the place, in fact.

Off you go then, across bendy straws, over staplers, and other home appliances, because, well, you’re a little bird in a big, big world. A world that’s just full of opportunities for you to flex those skills with a board, manuals blending together with kickflips, ollies, tailgrabs, noseslides, crooks, and oh so many others. You gotta land that big combo for it to actually matter though.

But when – and I do mean when, because it’ll happen – you bail… just get back on the board and try again. “Do. Or do not. There is no try.”? Clearly, Yoda never went skateboarding, because such a huge portion of the experience is, well, trying. And retrying. Over and over again. Until you get it right. At which point you’ll feel like an absolute kingbird.