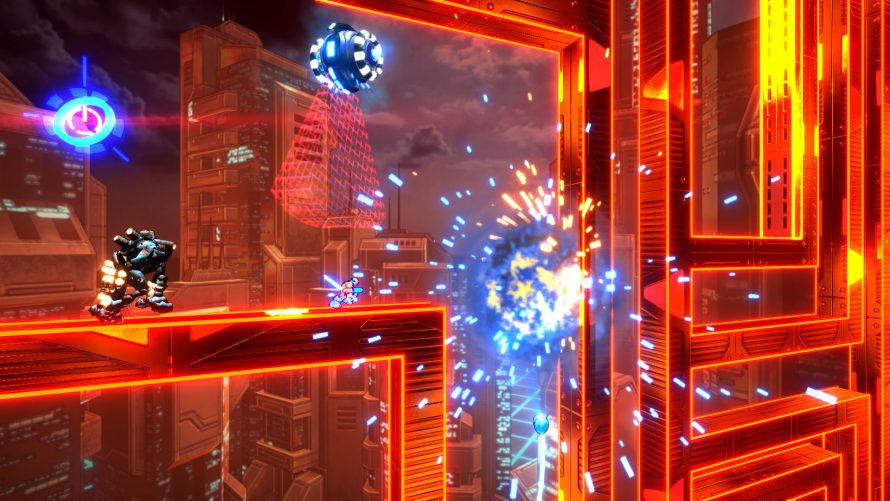 No antivirus software is going to take down the virus that has infected the system in Exception. In fact, this darn thing is so powerful, only one man(?) is suited for the task of removing it once and for all: you. By which I, of course, mean the game’s protagonist, powered with lightning-fast reflexes and a variety of deadly attacks in this perspective-shifting platformer where the environment will shift and change at a moment’s notice. Groovy stuff.

Now, if you’ve been reading my writings for a long time, you might remember how I hopefully wrote that Exception would be out in 2015 and, failing that, 2017. Well, third time’s definitely the charm, seeing how it is finally out, and on a multitude of platforms too. Steam! Switch! PlayStation 4! Xbox One! It’s all over the darn place, and if the trailer below is any indication, that’s a good thing. Because this one looks not only incredibly fun but also rather stylish, flashy animations and glowy level design. Very glowy. Super bright stuff, this.

Join a gang of four misfit software threads in their journey to overthrow the brutal regime and restore freedom to the system.

Visual appeal does not make a platformer great, however; at least, not for me. Speedrunning potential, and a high skill ceiling, on the other hand -- undeniably interesting components, and those actually seem to be the focus of Exception, seeing how the best way to get the highest bonuses is from an aggressive playstyle: move quickly, chain attacks together, and get creative with your routing, as levels continue to shift and change around you. Otherwise, it’s highly unlikely that you’ll ever top those lovely leaderboards.

Speaking of which, there’s also a pacifist route, for those looking to avoid becoming a murderous maniac enroute to whatever thing created the mess the player has been tasked with undoing. Whichever path you opt for… best of luck. You’re gonna need it.

Exception is available on Steam, Switch, PlayStation 4, and Xbox One, carrying a $14.99 price tag. Oh, and don’t forget about its soundtrack.

Exception Gameplay Trailer
Watch this video on YouTube.
Facebook Twitter LinkedIn Pinterest Tumblr WhatsApp Telegram E-mail
Previous article Turn the World Upside Down, Inside Out in 'DARQ' as Dream Devolves Into Nightmare
Next article Discord's 'Nitro Games' Catalogue to be a Thing of the Past Soon Because... No One Used It