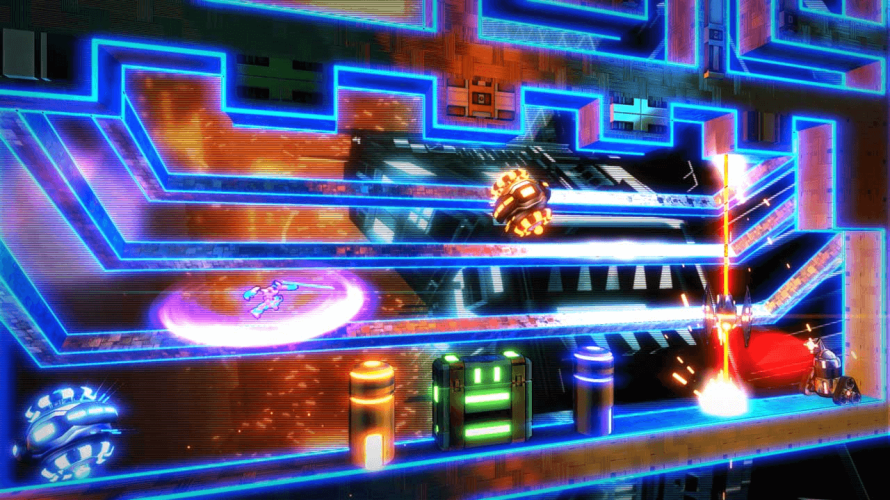 It’s been almost three years since my initial coverage of Exception, at which point development was in pre-alpha stage and the game… well, let’s just say it looked a lot less. Just less. I don’t know how else to describe it. Or do I? Ah yes, the super flashy colorful effects are nowhere to be found! And that’s just the beginning. Everything just looks more complete, more finished, more refined, more… well, crazy. Best of all, the game is finally being prepped for launch, world flipping action and all!

That said, we still don’t know exactly – or even close to – when Exception will be hitting Steam, save for ‘2017’. Which, fortunately, is this year. Don’t know about you, but I am certainly intrigued by the prospect of fighting against “a fascist computer virus” that has taken over an old woman’s computer, given the game’s overall presentation, fast-paced 2.5D action and of course, the music. Might be a tad too electronic/synthwave for some, but I like it. Blends well with what’s happening in the game (at least in the trailer, which can be seen below).

And with “128 levels spread across 16 worlds”, there’d better be some bumpin’ beats to accompany all the running, jumping, smashing baddies to pieces and… that inevitable death. I mean, Super Mario Bros. had a brief music bit play upon dying, so why not? But seriously, I’d be very surprised if this one doesn’t turn into a proper indie hit, what with those lovely visuals, action-packed gameplay – complete with unlockable special attacks! – and an ever-changing world to run through. Speaking of, leaderboards are totally a thing, so here’s to climbing the charts while kicking ass and looking good – all at the same time!

Exception will be available on Steam later this year, if all goes according to plan, with a TBD price tag.