We don’t really see a lot of indie game sequels (or expansions), and I doubt many expected that DLC Quest would get one either. Yet here we are, two years after its release and DLC Quest: Live Freemium Or Die is out. Now, I’m not sure whether it’s a sequel or expansion, but since it acts as a continuation of DLC Quest, I’m going with ‘vastly improved sequel’. So, let’s examine the conclusion to this comedy fueled RPG saga.

Remember how in DLC Quest, you started with pretty much nothing? You were an individual without an identity, known only as “Player”, and all you could do was move right – until you purchased the first of many DLC packs, that is. Even though you’re off to a much less ‘minimalistic’ start in DLC Quest: Live Freemium Or Die, the trend of constant messages about new DLC being available from the in-game store continues, along with even more video game comedy/references. Like in the previous game, these are used to access new abilities, access sealed off areas, and do certain not-exactly-normal things.

To pay for all that DLC, you’ll have to go on a coin collect-a-thon. Fun, right? Well not exactly, but it would have been a lot more annoying if the coins weren’t so well-placed –  I rarely had to stray off the path, in order to find them. That I enjoyed the ‘movement DLC’ I got in DLC Quest: Live Freemium Or Die much more than DLC Quest‘s version (Double Jump) could also have something to do with it. Aside from that one example, however, none of the DLC (or jokes) have been recycled – the same can’t be said about the visuals or animations, not that it’s really an issue. 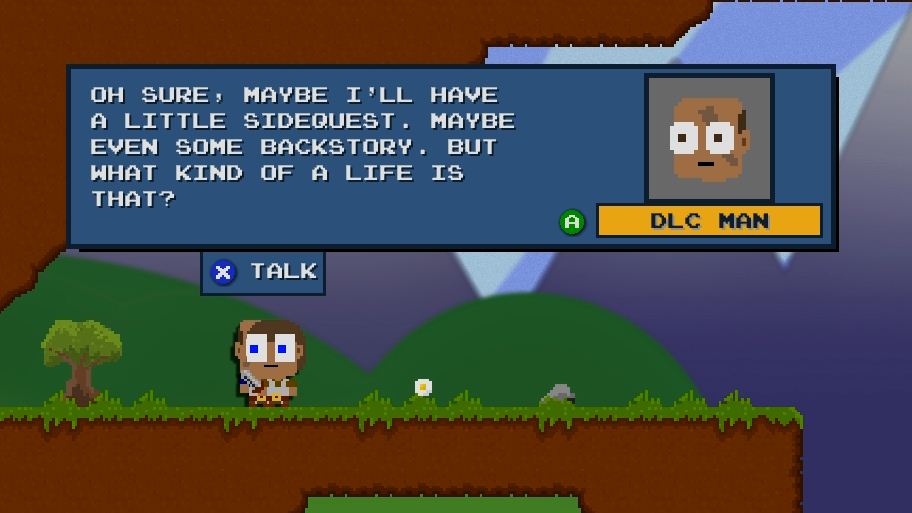 As you go along your merry way, bouncing all over the place in search of those precious coins, you’ll encounter some of the quirkiest NPCs ever to set foot in a video game, most of which aren’t extremely helpful either. But whatever their intended role, the dialogue brought to the table by these guys is always witty, with plenty of fourth wall breaking going on. Or, at least, most of them provided worthwhile dialogue. There was this one guy… well, let’s just say I didn’t think twice before buying a particular DLC pack (you’ll see what I mean).

Now, in my review of DLC Quest, I mentioned how I wished there was more to the gameplay, even with everything the DLC packs added/changed. Strangely enough, that exact wish has actually been granted in Live Freemium Or Die, as there’s literally more of everything here! Plus, even though some are from ancient NES games, the level of comedy still feels fresher this time around, and I’m willing to bet most of it will catch you completely off guard – in the best possible way.

If at this point you’re thinking that I’ve described a game full of comedy and cheerfulness, you’d only be partially right. DLC Quest: Live Freemium Or Die is a lighthearted experience, but not one entirely free of danger and peril, for all is not well in the land of… wherever the game takes place, and guess what? It’s your job to fix it! To reveal more of the story would be to spoil what little there is, but I’d say the meat of the experience easily lies in the journey rather than the reason behind it, and the gameplay should be more than capable of keeping you hooked all the way to the credits.

DLC Quest: Live Freemium Or Die from Going Loud Studios is available for Windows and Mac from Steam and Desura, bundled with DLC Quest, while Xbox 360 users can grab it as a stand-alone title from Xbox Live Indie Games. So what say you, Playe– I mean, hero?