Ah, downloadable content (DLC). As often used as a means of milking consumers, as a method for extending the lifespan of the game in question. Both types are present throughout the entirety of DLC Quest, a satirical take on the role-playing genre which shows what happens when DLC goes out of control. As long as you don’t take the game seriously, chances are you’ll reach the credits with a smile on your face, or even a wide grin, but let’s take it from the top.

Even though the game claims that rescuing a kidnapped princess is your motivation, by showing a big arrow with the word MOTIVATION on it, pointing in the direction of the villain, the story definitely takes a backseat to the comedy and I’d say it’s actually better for it. This game shouldn’t be played for the plot anyway – it should be about all the DLC, the earliest of which is required before you can do simple things like move left and jump. No really, you’re only able to go right until you fork over some coins for the first DLC pack at the in-game store, and… that’s only the beginning!

What happens when DLC goes too far?

In order to pay for all the DLC required to progress past certain points, you’ll have to collect quite a few coins. These can only be found in fixed locations throughout the world, meaning you won’t have to go slaughter a few hundred enemies to get them – some are however in locations that are unreachable until you acquire specific… wait for it… DLC! Thankfully some of the packs are completely optional, however entertaining, so you don’t have to collect every single coin, in order to beat the game. But if you enjoy virtual trophy hunting, be prepared to spend a lot more time in search of that golden currency, as there is an ‘awardment’ for finding them all. I was never into the whole “gotta collect ’em all” in video games, whether they be achievements or pokemon, but DLC Quest has a handful with various objectives ranging from normal to beyond silly, for those who enjoy such. Just don’t forget that there is also a princess waiting to be rescued. 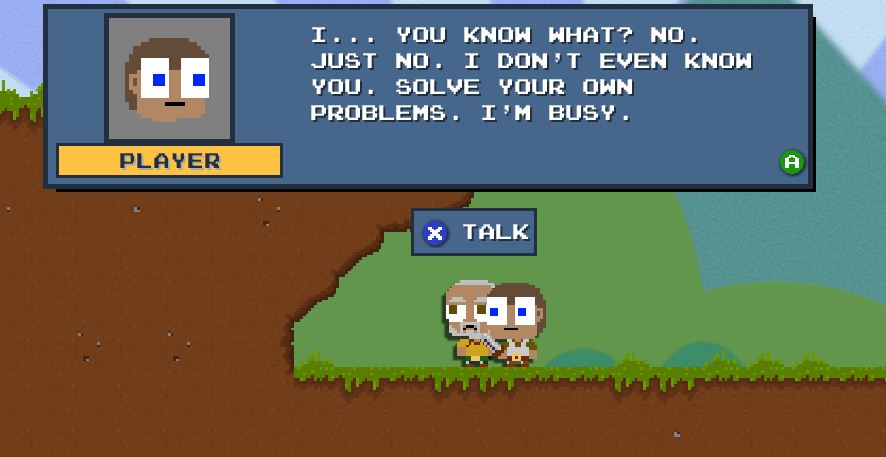 Now, this may sound strange, but the only bad thing I noticed in DLC Quest after playing through it, is that it feels like a one-trick pony at times. I mean, the majority of your time is spent collecting coins to buy more DLC, so you can collect more coins and buy more DLC – while slowly making your way through the story. I’m not saying that the game is repetitive to point where it’s no longer enjoyable, I just wish there was more to it, you know?

Aside from that, I certainly had fun with it, and in case you haven’t noticed yet, DLC Quest is definitely not a game that should be taken seriously. Those that do will miss the point completely – it’s a parody RPG, not the next Heavy Rain or Bioshock. Although a few of the jokes did make me go “wow, really?” in disbelief, they were quickly followed and overshadowed by more laugh-out-loud comedy, so I’m gonna chalk that part up to personal preference. Overall, it was fun – albeit short – from the cheesy intro and all the way to the credits, coin collect-a-thon included. So why don’t ya pick it up right now, from either Steam, Desura or Xbox Live Indie Games? Have fun with all the… DLC!