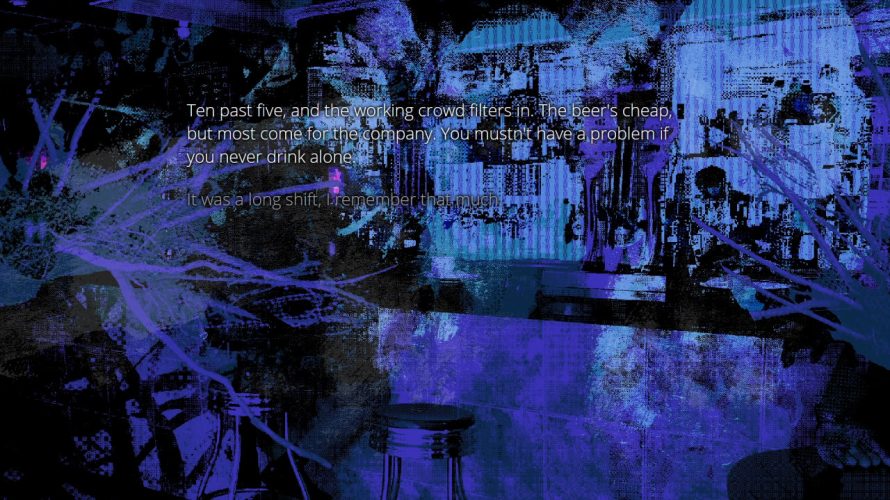 Being left behind as everyone you know and love leaves a small town behind in search of something, perhaps even someplace, better. Especially when it happens not long after high school. At such a young age, what are your options, really? Follow them? Sure, but where would you go? Yeah. So instead, you decide to get a tattoo, kicking off the psychological horror that is Cover Me In Leaves.

To say that this one is unsettling would be quite an understatement as it doesn’t waste any time taking a turn for absolute darkness. On a level that comes with a content warning, consisting of “allusions to / discussion of self harm, suicide, assault, homophobia, and transphobia”, according to its creators. So if any of those make you uncomfortable, maybe give Cover Me In Leaves a pass. Better safe than sorry, after all.

That said, it is still very interesting and well-written, a story of loneliness, isolation, entropy, and… some genuinely disturbing textual imagery (not to mention actual imagery, courtesy of some rather striking backgrounds). But as I have mentioned already, it most certainly is not for everyone.

Given its themes, it’s hardly all that surprising to find that Cover Me In Leaves is written in first-person, jumping between past and present tense. Something that might have made for a confusing read, were it not for the relatively short length of this particular story, the credits likely rolling for most in 10-15 minutes. And yet quite a bit happens – good and bad – after which the inevitable conclusion of its linear narrative is reached, everything wrapped up nicely.

Now, like so many small towns, even these days, this one is also far from perfect, its inhabitants… let’s just say that more than a few are far from BFF material. Yet another reason for the unnamed protagonist to get as far away from here as humanly possible, but with limited prospects, it really is a case of ‘better the devil you know’. Until it isn’t.

I tried to find more – in fact, I wanted to say more about Cover Me In Leaves, but no matter how carefully chosen my words, the feeling that I’d be spoiling more than is appropriate for a review was unshakeable. So instead, this is where I’m gonna recommend picking up a copy and giving it a read as it is an undeniably interesting and thought-provoking tale.

Cover Me In Leaves is available on Steam and itch.io, carrying a $2 price tag.