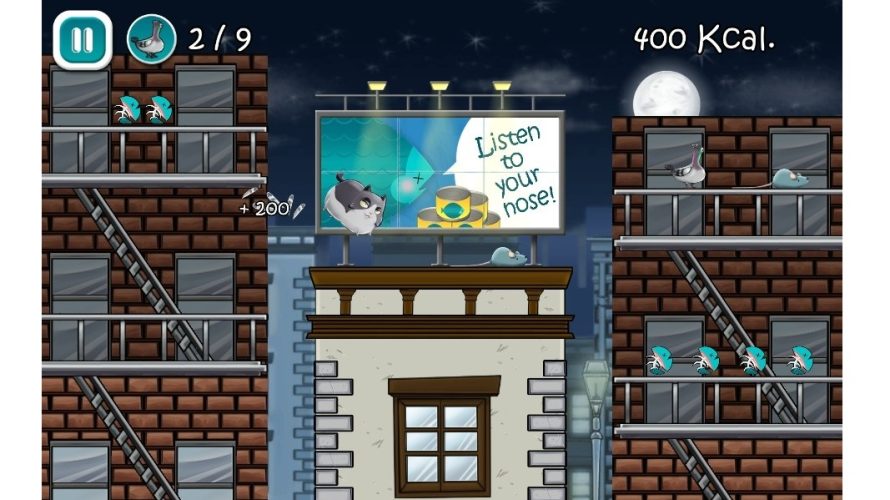 Everybody wants to be a cat… especially this one. I mean, it may be an obese feline, but make no mistake: Chunky (yup, that’s his name) still has more than enough energy to catch fish, pigeons and other tasty snacks! Mouse traps, on the other hand, are fatal in this food-gobbling runner. Go figure.

So, needless to say, the protagonist in Chunky Cat ain’t about no super-powered pet, even if he’s capable of performing a short mid-air dash and… bounce on pigeons? Right. Not sure what that’s all about, although it does make snatching fishes and catching rats easier, as the latter will run away at the sight of you.

Controlling the fat cat is a rather simple affair, as clicking your mouse / taping on the screen once makes him jump, and twice to dash. Filling his stomach 100% in every level, on the other hand – not so much. Collide with a mousetrap once or fall over the edge, and you’ll have to repeat the current level. Like in most runners, they’re not overly long though, so failing one could certainly have been more punishing.

That said, while the art style is lovely and the music catchy, there were moments when I felt like the level design were to blame, rather than a lack of skill. An example would be the sixth level, where one jump, in particular, kept sending me right onto a mousetrap, even though it should have landed me on the platform above. Puzzling, to say the least.

Chunky Cat may be a tad simplistic in nature, and I’m sure some will just breeze right through it, but then there’s the lure of… going above and beyond the call of duty! Why be fed, when you can be well-fed, after all? So eat up.