After enjoying success on Windows, Mac, Linux and even 3DS, the physics puzzler known as NightSky has finally set up shop on Android and iOS too! At first glance, this may look like LIMBO with those silhouette-style visuals, but fear not – the two have next-to-nothing in common. Now, before we dive into my thoughts on the game: don’t worry, the oversized spider stayed in LIMBO… That’s not to say NightSky is without obstacles though. Far from.

Whenever a 2D platformer is released on a touch-screen device, the first thing to pops into my head is: “how are the controls?” In this case, pretty much flawless. Of course, it does help to have not one, not two, but three different control schemes available: tilt, digital and swipe. While I had some trouble swiping whenever speed was vital, both the tilt and digital controls gave me no trouble; even though I played the whole thing on my somewhat bulky iPad 2. Not sure how it would play on older iPhones or the original iPad, but according to the developer it’s “optimized for iPhone 5”. 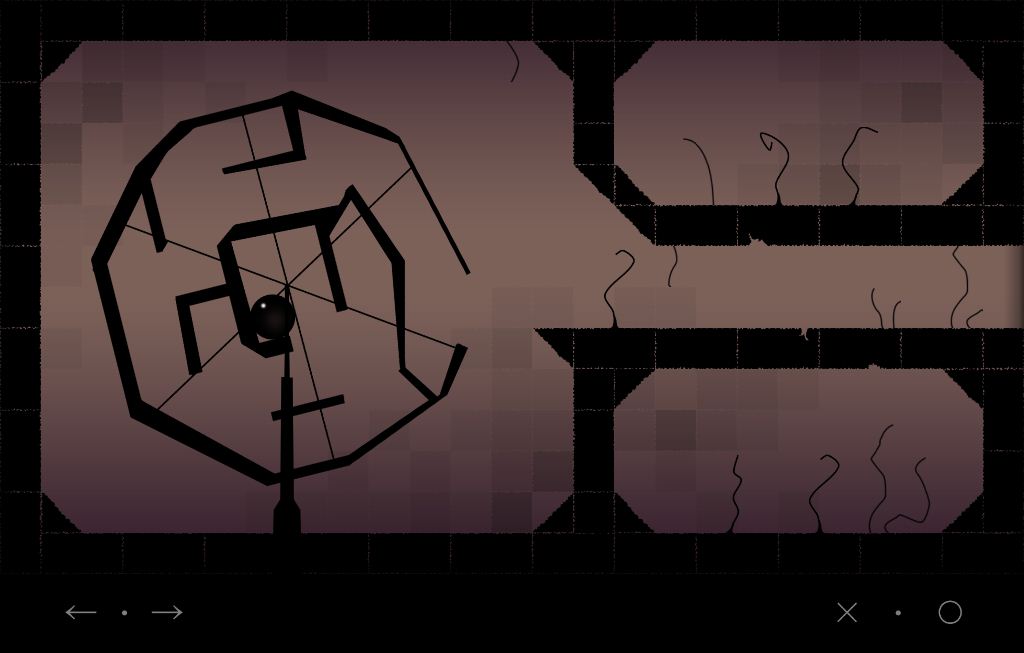 But it’s one thing for a game to handle fine. If it looks bad or the art style is otherwise off-putting, a lot of people are bound to give it a pass, based entirely on that (sad but true). While NightSky does look somewhat simplistic, I quickly realized that the low-fi style actually harmonizes with the gameplay and manages to create what can best be described as a relaxing and enjoyable puzzle platformer. Besides, the fun in NightSky is to keep the ball rolling, which is best done with as few distractions as possible. If everything was detailed and the backgrounds were full of life, the visuals would likely clash with the gameplay.

With varied and beautiful worlds, each is broken into different areas. Use intuitive touch controls to maneuver a mysterious crystal sphere and unlock the mystery. There are no enemies, no bosses and no violence in NightSky.

Your objective in each area is to steer a crystal ball across strange lands, up steep hills, over chasms, and sometimes you’ll even get to [spoilers deleted]. But there’s more to it than simply gathering the momentum required to jump across gaps, since falling off-screen will immediately send you back to the beginning of the current area (ouch). Thankfully, areas are bite-sized for the most part, so you’ll never lose a lot of progress when you inevitably spin out of control and over the edge. This certainly made the experience far more enjoyable, and who likes having to repeat several minutes worth of content because of one tiny mistake anyway? 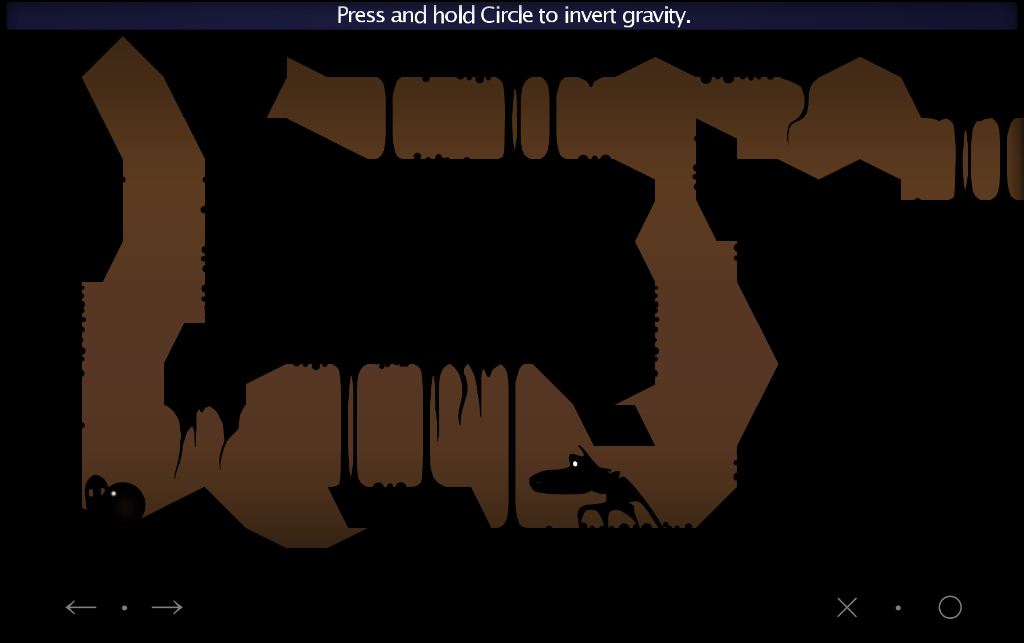 Press and hold Circle to dance on the ceiling.

While monitoring the terrain and planning a safe route through it, you’ll often find that the game tends to mix things up by giving specific areas a unique effect – don’t be surprised to suddenly find yourself with the means to invert gravity or move at breakneck speeds, among other things! And while you’re busy rolling around, I’d recommend paying attention to the text at the top, because not only does it act as a means of introducing the various mechanics, it’s also where you’ll be informed if anything is different in the current area (like the aforementioned gravity twist).

That said, I wouldn’t get too comfortable with the disembodied voice (or text, in this case) though since it will not be with you the entire time. I believe this to be a good thing, because… wouldn’t it be boring if someone always held your hand and explained everything in great detail, never leaving you to figure anything out on your own? Thankfully NightSky does have more than a few “how do I do this?” and “what the heck is going on?” moments, which for the most part, depending on your skill level, are followed by “ah! of course” realizations; and then there are the times where even I was left in a state of confusion until, after 10+ retries, I finally figured it out. Gotta love difficulty spikes (not really). 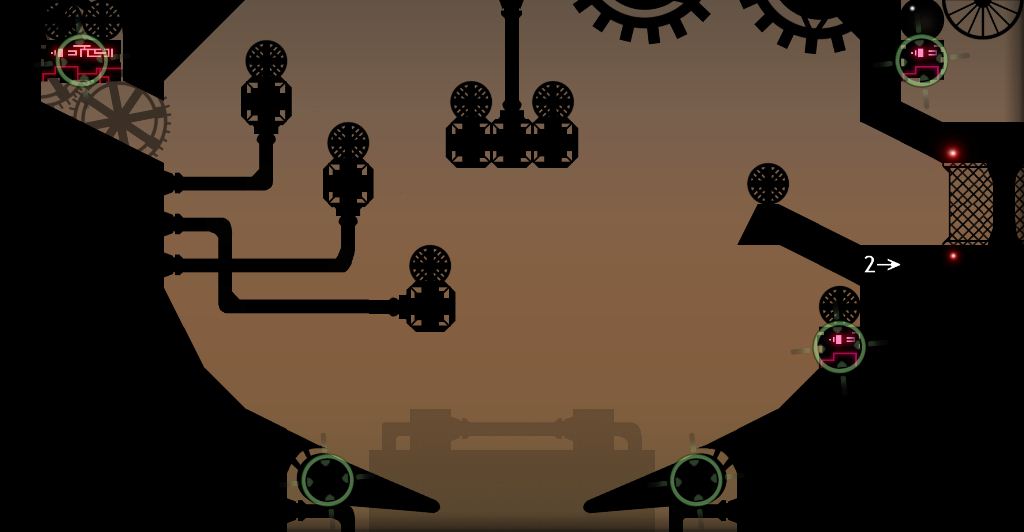 Think I’m speaking nonsense? Well, I am actually, but no more than usual. There are a few sections that I like to refer to as ‘the crazy areas’. In these, timing is almost as important as staying on the ball (at times, literally), while also balancing the act of dropping several falling objects to form a path. While it never reached the point where I felt like giving up, there were a few times when the zen-like state NightSky had put me in, was broken temporarily. Since the frame-rate never dropped and every tap on the screen responded accordingly, that leaves two possibilities – difficulty spikes and me being rubbish. Take your pick.

Aside from that, there’s nothing really negative to be said about NightSky. The game is a ton of fun, easy to get into, and its deceptively simple mechanics are likely going to get you hooked, so it’s a good thing that there is a lot of content available! For those who want more after beating the game, there are also 46 Game Center achievements and playing through the 11 levels (again) on a collectibles hunt is also an option. While neither is my kinda thing, I do appreciate their presence, since I know other people will enjoy them.

In case you haven’t realized it yet, NightSky is a game I’d highly recommend to just about anyone; except those who aren’t fans of puzzle games or platformers. It’s available on quite a few different platforms too, from iOS (iTunes) and Android (Google Play) to PC/Mac/Linux (Desura). Have fun!