One can never have too many roguelikes, I always say, and even though there are a crazy amount of alternatives, Dungeon Fray manages to stand on its own, with fast-paced gameplay and a neat trick or two. For example, how does a perk system tied to achievements and fast-paced gameplay (hint: mouse controls) sound? Crazy? Wait, what?! Tell me, have you forgotten how unfair/random roguelikes can be? I certainly wouldn’t pass on something to help even the odds.

In Dungeon Fray, you play as either a fighter, a mage or a rogue and your quest is to track down a shadowy figure who stole a sacred orb; I know, a roguelike with a story, who’d have thought? Not that it carries much weight beyond the ‘why am I here?’ introduction though. Once you’ve created your character and picked your perks, the game turns into the monster hacking/blasting/slashing fest that a roguelike should be. Oh and there are achievements, but in a nice twist, they actually serve a proper purpose – I mean, other than being virtual trophies that show off certain accomplishments. 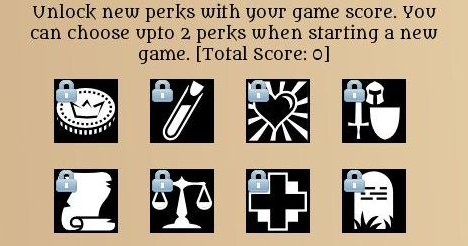 Achievements and experience points both add to your game score, which is then used to unlock various perks. Being able to start the game with more potions or more health certainly isn’t a bad thing, especially since Dungeon Fray can be quite difficult! Outside of potions, there’s not much in terms of an inventory system here. In a way, that’s a good thing: less stuff to get in the way of kicking ass and taking names, and now you won’t be shuffling your gear around to fit that newly found chain mail in your backpack. It’s kinda rare for a roguelike to be almost completely void of equipment (potions don’t count), but since he’s still working on adding/fixing/changing things, maybe it just hasn’t been implemented yet? Who knows!

But there’s much more to Dungeon Fray than what little I’ve shared, so those interested should grab the demo here and see for themselves if all the fuzz (aka. my ramblings) hold any value. Should you deem it worthy of coins, the full version can be acquired for $6.99 from the official website or Desura. Bring a healthy supply of potions and good luck with your quest…