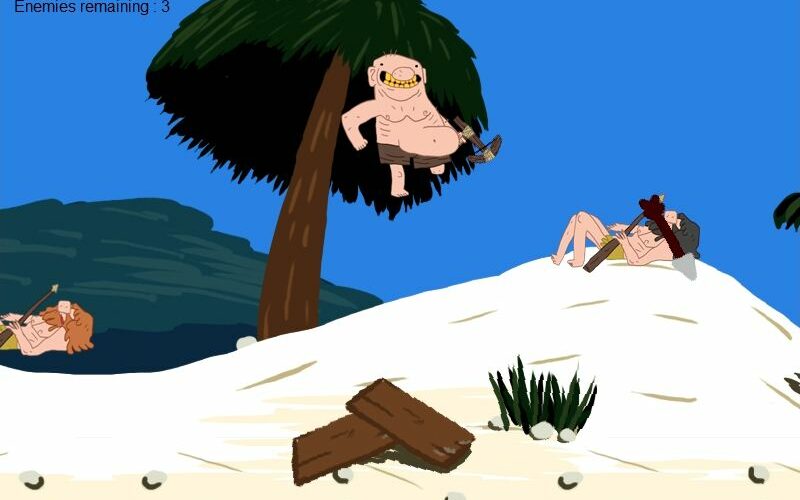 You’d have to be considerably messed up in the head to send eleven people off to an island, only allowing one to return alive. Yet that’s exactly what someone has done. Why? Well, for entertainment it seems. Man, what a jerk. Anyway, armed with only a crossbow and one arrow, you’ll have to deal with ten spear wielding opponents. So kill or be killed!

Why the other combatants (contestants?) are all tall and skinny, while your character looks more like a fat retired pirate is beyond me. Kinda makes ya wonder if the entire thing is rigged, eh? Not like taking down the lot is overly tricky though. You’ll need to reacquire the arrow after each shot though, so aim carefully and don’t send it flying off the island. Should that happen, it’s pretty much a death sentence – swimming is not part of your skill set in this game. No picking up spears from fallen foes either, as our disembodied host simply won’t tolerate such nonsense.

Seeing how You only get one chance to survive ! came to life during Ludum Dare 28, time was obviously of the essence. Didn’t stop the duo from adding some variety though, by way of five different characters, each with a unique weakness related to the “you only get one” theme for the jam. One arm, one life, one eye, and so on.

While bouncing around on one leg was fun, the ‘fish face’ fella easily takes the prize as my favorite though. Being limited to 60 seconds, after which he’d suffocate, certainly added to the challenge. Some might say that dealing with a bunch of maniacs who’ve teamed up to hunt you down is bad enough, but as fate would have it, every playable character comes with a unique handicap. This does add some replayability however, even if you’ll still be flinging arrows at the same ten AI controlled opponents. Fun times, nonetheless.

Time to find out if you have what it takes to win the show, but remember:  You only get one chance to survive !