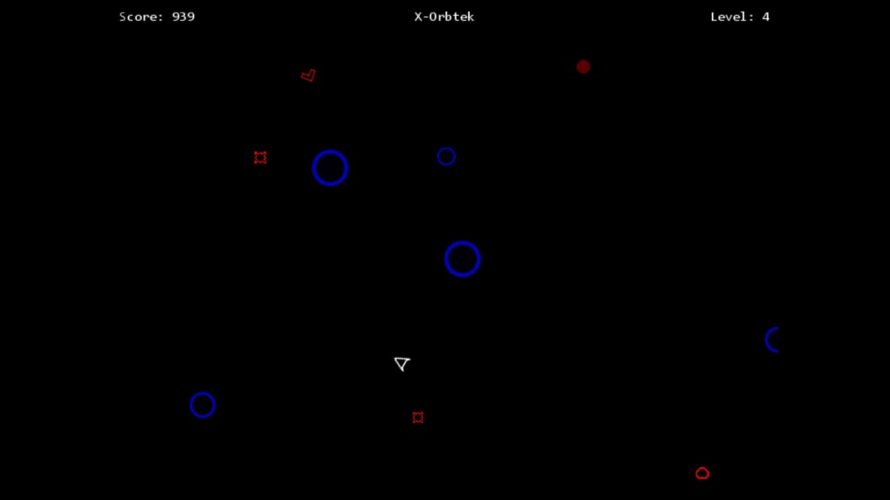 Is it just me, or does that space ship remind anyone else of Asteroids? Hmm… Suppose that could be intentional, since Oxygen Addict’s X-Orbtek is a throwback to when visuals mattered less than today, and even the most basic arcade games had everyone feeding quarter after quarter into the machines for that one more try (and bragging rights of course!)The importance of setting a high-score in your local arcade may seem crazy to some people today, but isn’t what people do with online leaderboards today pretty much the same thing, only on a larger scale? Just about every genre imaginable today has them after all, and while X-Orbtek does play and look a lot like an arcade game from the 1970s, that doesn’t mean it’s stuck in the past in every single way, because it has both local and.. wait for it.. online leaderboards!

But enough about high-scores, leaderboards and a simpler (better?) time for video games. In X-Orbtek, your task is to pilot a tiny triangular space ship through constantly shrinking blue orbs, while at the same time avoiding any and all things red on the screen. Why? Well, these are enemy ships and colliding with one results in an instant game over – no extra lives here. It may seem like a simple formula, but the inclusion of various pick ups helps keep things fresh, as you fly towards the next blue orb, hoping to reach it before it fades into nothingness.

Colliding with an enemy is not the only way to get that nasty “game over” screen either, because you need to constantly be on the look-out for blue orbs, as moving through one is the only way to spawn more, and if at any point there are no more orbs on-screen.. game over! Oh and how about this for an extra degree of challenge: An enemy type known as a “Cleaner” actually removes orbs in its path.. ouch.

It may not seem that way at first, but survive long enough and you’ll start to see plenty of variety among the enemy ships, including that annoying Cleaner and those that actually chase you like a pissed off bill collector. But the pick ups I mentioned earlier does make it somewhat easier, and among these you’ll find a shield that lets you smash through enemies without a care in the world, one that spawns more blue orbs and even one that resets the size of all orbs on the screen. Do be careful however, as there is one pick up which is far from beneficial.. I’ll let you guess what color that one is.

See that picture? how’s that for a quick gameplay summary, eh? If you feel like roaming through space and collecting some orbs, X-Orbtek can be purchased directly from the Oxygen Addict website for £1.40 (with or without Devster). Try-before-you-buy? Here’s a browser-based demo then. Oh and, Twitter (@OxygenAddict).