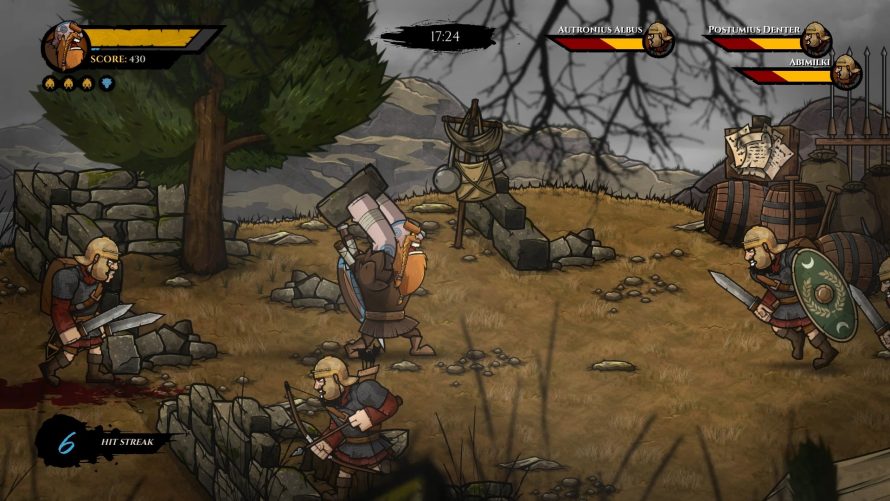 The armies of Rome have been marching on Britannia in Wulverblade, making steady progress, having long since taken control of the south. Now their sights are set on the north, and the Ninth Legion is ready, numbering a grand total of 5,000! No problem, right? Well, it would be an easy conquest… if not for Caradoc, Brennus, and Guinevere, guardians of the northern tribes, that is. A trio not to be trifled with, as the Romans are about to find out.

Axe, sword, blade -- or whatever weapon(s) may be lying around -- in hand, ass-kicking, and name-taking is on the menu in this game, in the style of classic beat ’em ups. During my playthrough of the campaign, I noticed clear nods to the likes of Knights of the Round and Golden Axe, among other, and nicely done too. But what really carried the experience for me was the mix of absolutely brutal combat and the historical tidbits.

Whether hacking, slashing, smashing, bashing or dashing, I was a force to reckon with! Caradoc (my character of choice, for the most part) was nigh unstoppable, as the Roman armies -- and their allies (traitors!) -- discovered, indicated by the trail of corpses in my wake. From archers to ax-wielding berserkers, armored soldiers and even oversized brutes… they all fell to my blade. It was a bloodbath. There is simply no other way to describe it.

That’s how I wanted to describe my experience with Wulverblade at least, but I’d be lying if I said the entire thing was that one-sided. The ability to block attacks and/or roll out of harm’s way came in handy more than my pride would let me admit, and I did die not once, not twice, but… well… several times. Fortunately, campaign mode brings about unlimited continues and checkpoints -- a godsend for me, as I am by no means a beat ’em up expert. 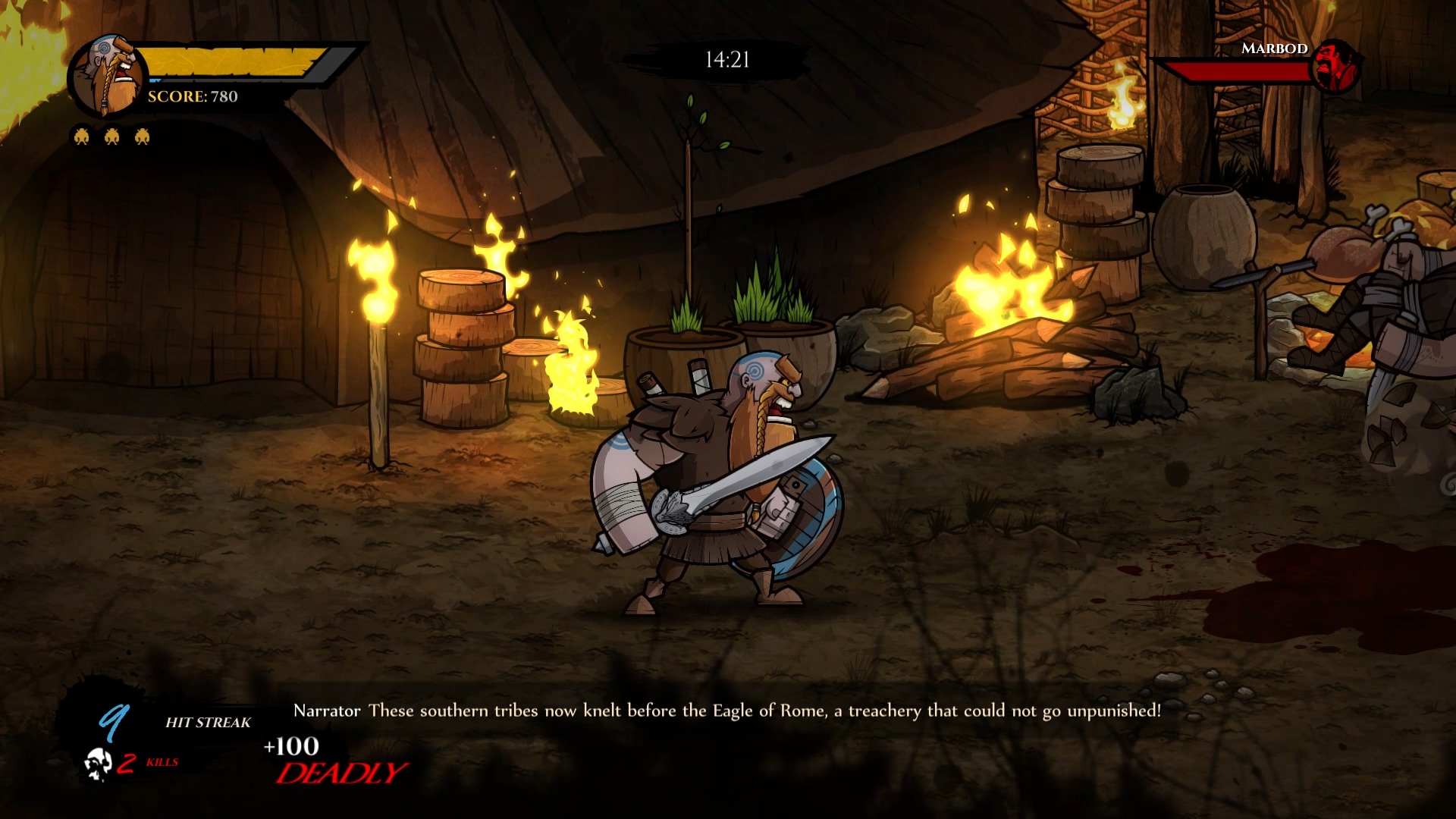 On top of that, there’s no denying that the odds were not in the favor of Caradoc, Brennus, and Guinevere. Five-thousand-to-three? Yeah. Not cool. Oh, and the scene is pretty much set from the get-go, as the game kicks off in what I assume is a village ablaze, bloody bodies lying everywhere. Everywhere. And the foes faced here were not even Roman soldiers. Or in a way, I suppose they were? Traitors, soldiers -- same thing: enemies!

Little did those bastards know that Caradoc wasn’t alone. Little did they know that he, once per level, had the ability to call in a pack of vicious wolves! It obviously wouldn’t be enough to even the odds. Not even remotely. But every little bit helps, ya know? And then there’s the rage. The ever-growing (from consecutive hits) rage, to the point where it’s overflowing, turning him into an immortal wrecking ball of destruction. Spoiler: it’s incredible!

I often wondered exactly where said ‘power’ came from. Might be silly instead of simply enjoying the combat boost it yielded when triggered. In the end, I settled on Caradoc’s glorious beard being the source and went back to mowing down the hordes. At least the wolf summoning is explained early on, beardy being one with nature and all, likely having long since befriended said creatures. Based on their prowess in battle, I’d say he managed to train them for this very purpose, somehow. What a warrior. 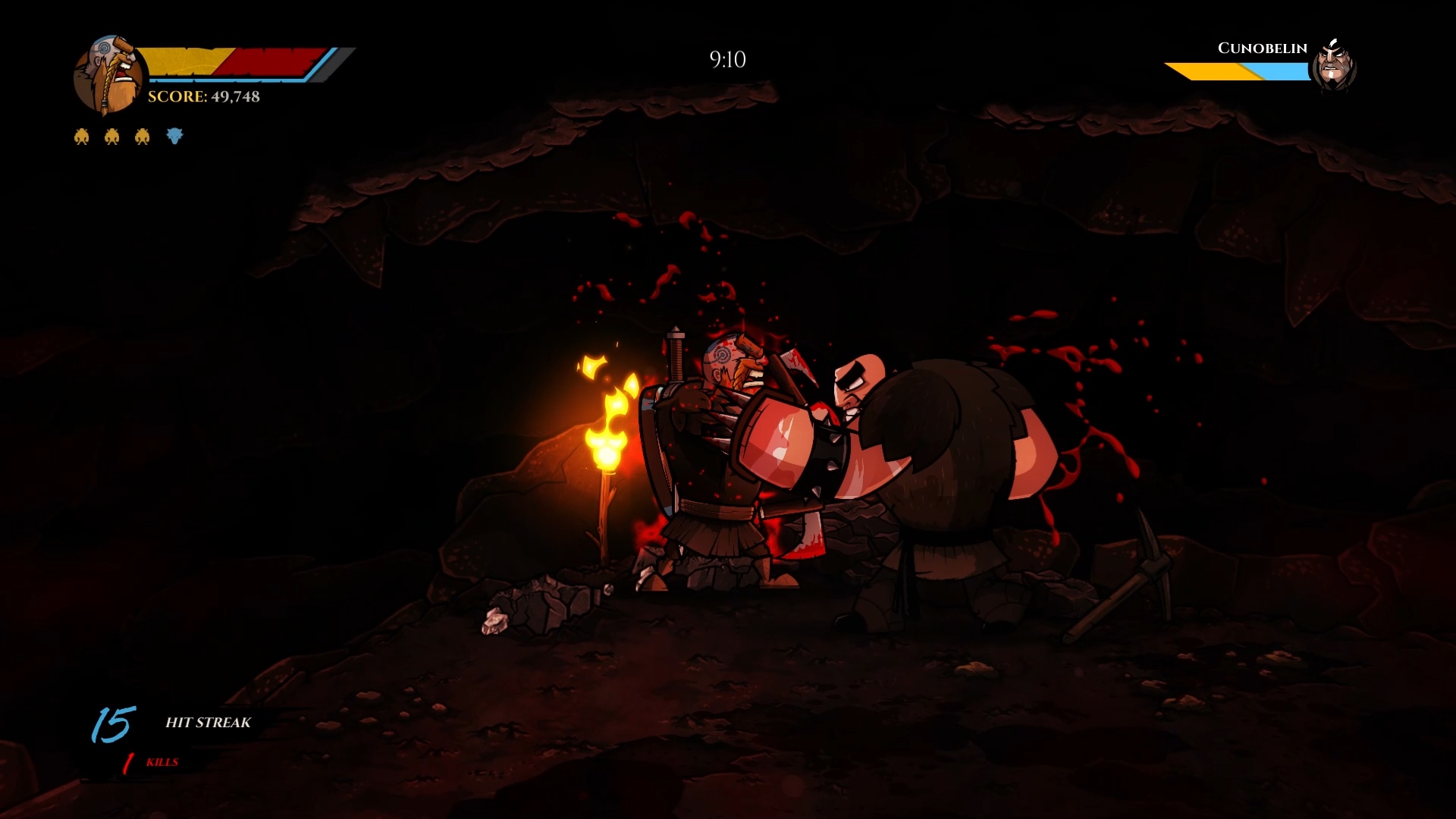 Ah, almost forgot: combat isn’t the only way to build rage. Like in classic genre entries, fallen foes and smashed objects alike have a chance of dropping various items. Some of these -- like apples and grilled chicken -- are medical, while… mushrooms… well. They’re… bad for you? Except in Wulverblade, they’re actually good, seeing how they boost your rage meter! I know. Mushrooms. Weird. Then again, I’m sure the history books will back this up somehow. But still, weird.

Speaking of, I mentioned earlier how the game is full of historical tidbits, and it really is. Documents/letters lie scattered around the world, brief notes become available upon the acquisition of a new -- temporary (they always are) -- weapon, and then there’s the character design. I could be wrong here, but I suspect the in-game design actually depicts how history dictates their appearance.

Or maybe not. Either way, everyone looks absolutely kick-ass, from the three playable protagonists to every last enemy -- whether it be the various treacherous bastards to Roman soldiers. Oh, and it’d be a crime not to mention the voice acting during the game’s many cutscenes, as these all carry the exact accent one would expect. Impressive work in that regard. Same goes for the art style in general, not to mention animations, the entire thing covered in a rather lovely cartoonish look, movement and combat alike looking great.

Now, one of the problems this particular genre tends to run into from time to time is, simply put, having too much on-screen at any given time, making it hard to tell what’s going on. As for Wulverblade, I didn’t notice this more than once or twice, at which point I would simply dash/roll rapidly to safety; quickly repositioning myself, as it were. Not even boss battles, in spite of most featuring absolutely massive characters, suffered from this problem. In fact, I’d almost say these were a bit of a high point in the campaign, making for a welcome change of pace after beating up numerous… ‘foot soldiers’, for lack of a better term. 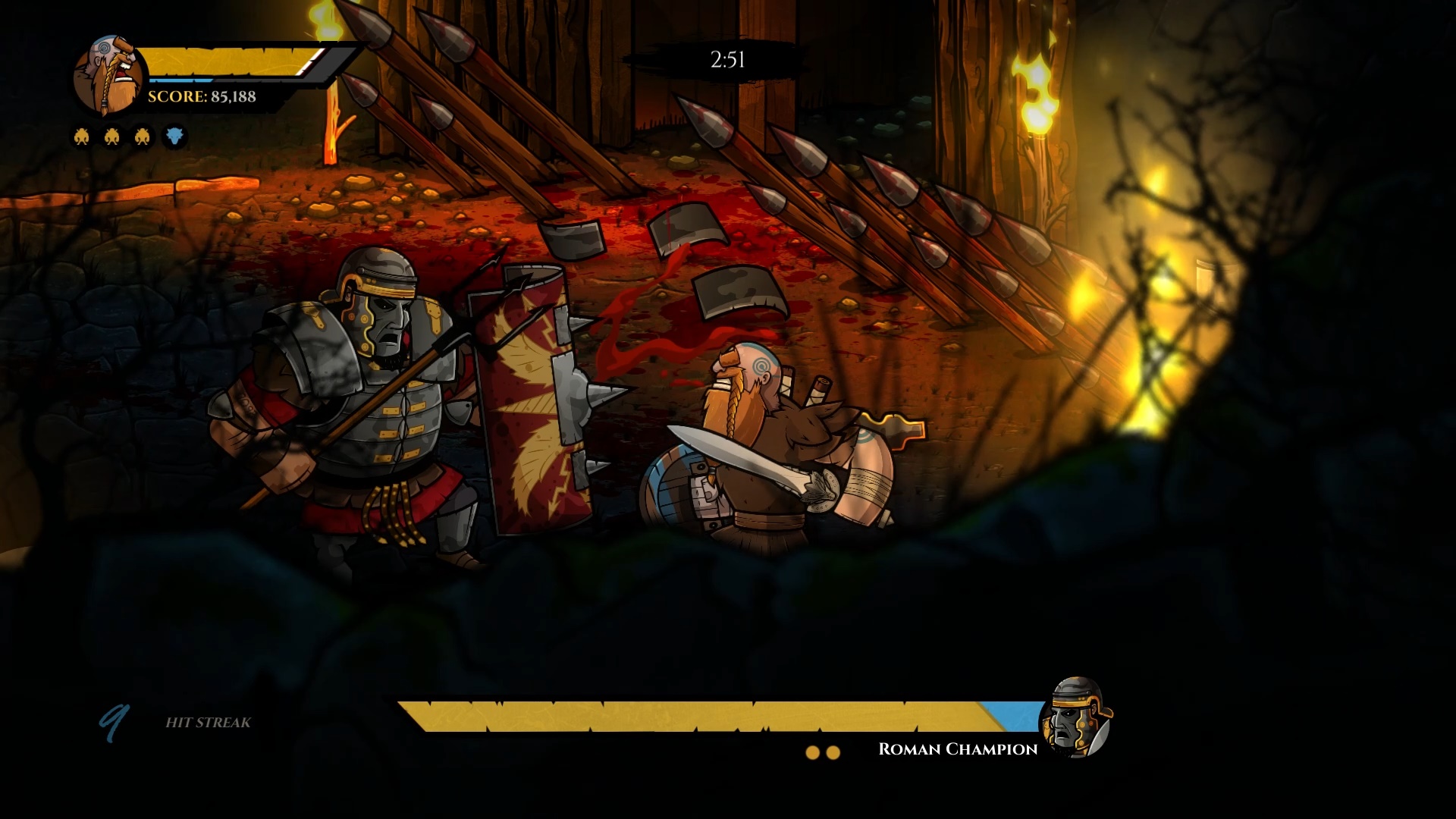 See, most enemies can be disposed of by way of button-mashing, with a bit of tactic applied, as to not end up getting absolutely demolished when an enemy decides to counter-attack. Bosses? Nope. You will get destroyed if you simply stand there, attacking blindly. Which I did for the longest time until I started paying attention, something that undeniably also increased the fun factor drastically!

While their attacks may be signaled from miles away, making them relatively easy to dodge, you still have to actually, you know, dodge them. More often than not, this is also the safest time during which you will be able to launch an all-in attack, hacking/whacking/mashing away at the brute standing between you and the next level. Until he/she summons reinforcements that is. Then you’re forced to shift your focus away from the big guy/girl for a while until the new arrivals have been dealt with.

All the tools you will need to dispose of these hulking obstacles are available from the moment you have control over your character of choice. There is no upgrade/leveling system in Wulverblade. The equipment you start with -- in Caradoc’s case, shield, sword and glorious beard -- is all you’ll have. I mean, sure, you’re able to pick up throwable weapons and a variety of ‘smashers’ (large hammers, axes, and so on), but these only last so long, making them significantly less reliable.

On the topic of surviving, having focused so much on the offensive aspect of Wulverblade up to this point, you’ll do well to keep an eye on the entire screen at all times. Because… clearly visible enemies are not the only thing that can hurt you in his game, any manner of environmental hazards also being quite capable of eating away at that precious health bar. Something I found out the hard way by standing in a spot clearly indicated as a location that would momentarily be filled by a volley of arrows.

A painful lesson for sure, although since I was playing campaign at the time, rather than arcade, I was free to experiment, blessed with continues and checkpoints. Not quite so in arcade mode, as here, players are limited to 3 lives and 3 continues, after which it’s game over. Best of luck to anyone brave enough to attempt a playthrough with those restrictions. I most certainly am not, having only just smashed through the campaign on easy, and there’s a reason for that.

Given the choice between ‘easy’ and ‘normal’, I mostly lean towards the latter, no doubt. But Wulverblade being billed as “a hardcore side-scrolling beat ’em up”, emphasis on ‘hardcore’, attempting a clear on the highest available difficulty would likely end with me quitting in frustration. And honestly, finishing a game for review should always take priority, even if it means going through with a lower challenge (so long as no cheats are applied, of course!). 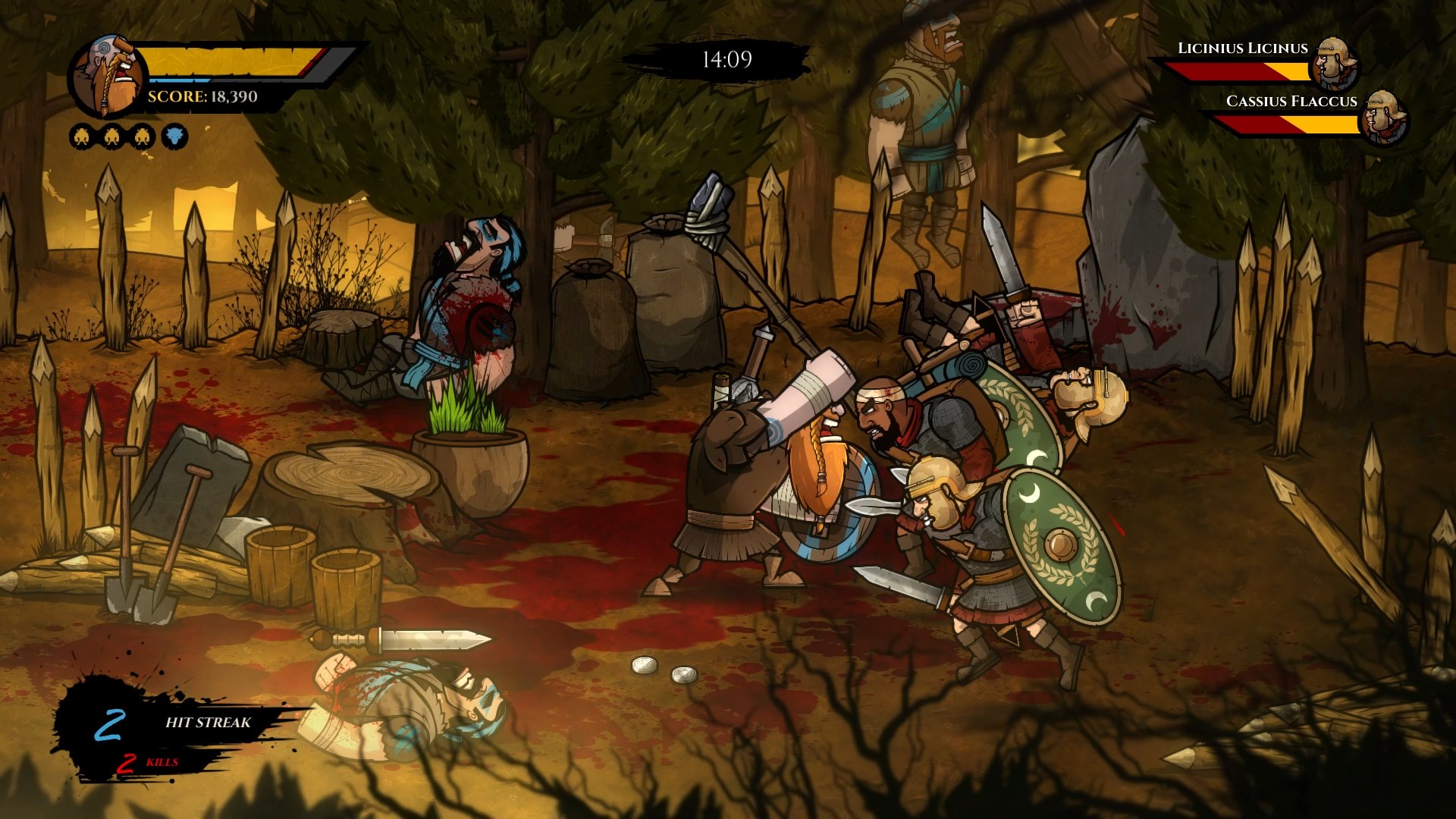 Anyway, for as low a level count as eight, there’s plenty variety in terms of locales here, ranging from forests to mountain ranges, villages and… some I shall not mention here, for fear of spoilers. On a related note, huge fan of how the story was wrapped up, everything concluded nicely, and in a satisfying way to boot. Didn’t really expect that from a game so heavily focused on the brutality of war, pulled from the pages of history.

Then, once all was said and done, a brand new mode became available! So on top of the sizeable (for a beat ’em up) campaign, there’s the incredibly challenging arcade mode, a handful of arenas featuring a never-ending onslaught, and that one unlockable mode. Again, can’t say what it is because it would spoil the story, believe it or not. And even if some are going to be playing through this one for the gameplay more so than the plot, spoilers are still bad, far as I’m concerned.

As for the two other playable characters, Brennus and Guinevere, I did take both for a spin, but Caradoc provided a style more fitting for my tastes. Some might like how they, unlike Caradoc, are balanced more towards agility and power than defense, respectively, while he is… evenly distributed, I suppose. Oh, and I couldn’t help but feel like his weapon of choice had noticeable more reach than the other two? Peculiar. Another nod to Golden Axe, I’d wager. 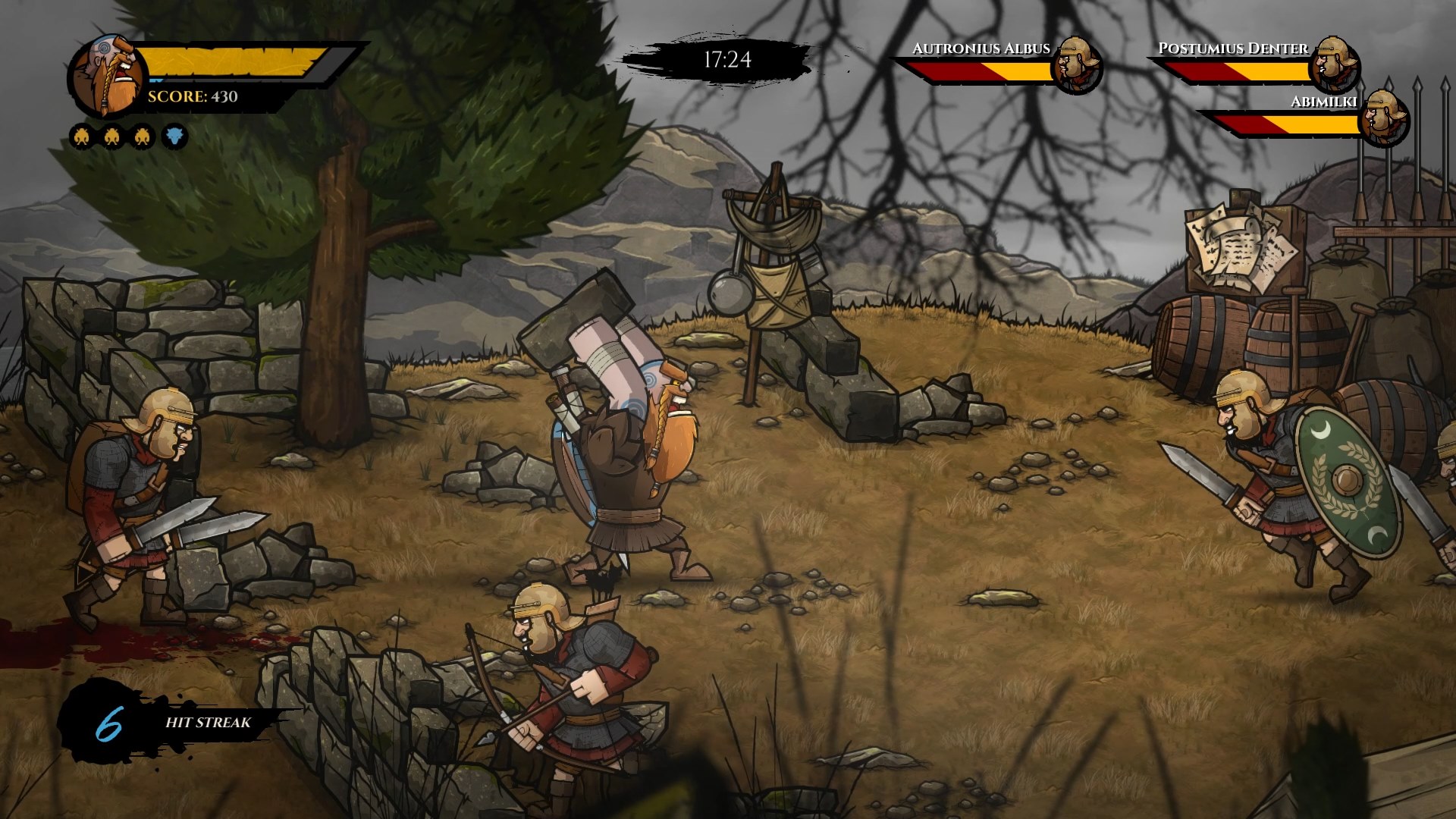 So… all in all, Wulverblade was quite a pleasant surprise. Meaty combat, interesting story, likable characters, and historical attachments -- good stuff, ya know? And I’m not even a huge fan of the genre, making my generally positive impression a tad surprising. Although I guess that simply means Fully Illustrated knew what they were doing when they put this one together, Roman armies and all. For the glory of Britannia! (As it were…)

Wulverblade - All Systems Trailer
Watch this video on YouTube.
Facebook Twitter LinkedIn Pinterest Tumblr WhatsApp Telegram E-mail
Previous article 'Starward Rogue' Gets AuGMENTED With Lots of New Items, Areas, Enemies, Everything!
Next article Mine, Mine, Mine: 'SteamWorld Dig 2' Gets Physical On PlayStation 4 and Switch