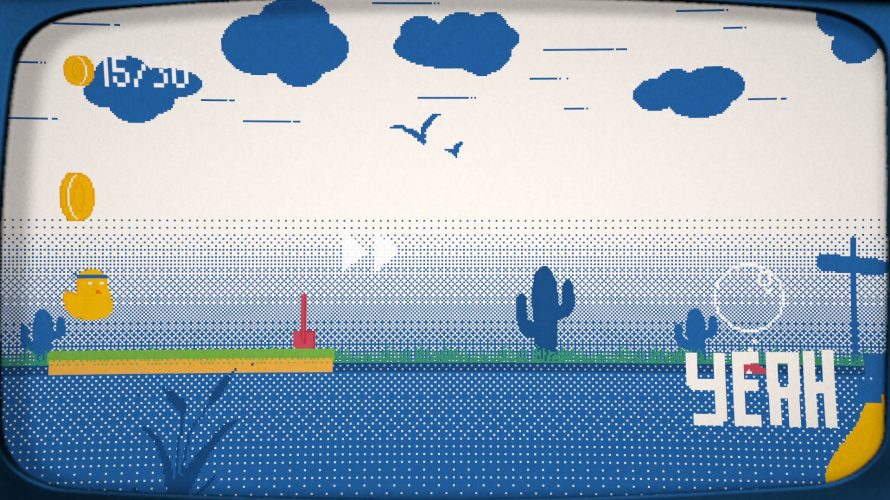 In our world, I suspect even the most Wonderful Duck would never consider collecting coins in order “to reach babes on the beach”. Something about it just doesn’t add up. But this is a video game, and so here we are, a few dozen hops and skips away from… babes on the beach.

Still with me? Okay. Good, because we’re only just getting started. Or that’s what I would say, if not for the fact that this is a rather basic one-button time-waster. Not that it’s genuinely terrible, but it is still very much a time-waster.

See, the protagonist moves along automatically as the screen scrolls, and all you have to do is press space to jump, hold it to jump higher, and double-tap to, unsurprisingly, double jump. Both to get coins and avoiding colliding with just about anything that isn’t a coin. Pretty simple stuff.

Oh, there are also hats to collect, although none are saved between runs, so if you want them all… well, you better practice. A lot. Because the difficulty ramps up rather quickly and, even after a dozen or so attempts, I still felt like the timing was slightly off. That or perhaps the hitbox of the duck.

While its CRT filter and art are both kinda neat, I do feel a strong urge to remark just how repetitive the music is and how bad an idea it was to have jumping trigger a “jump!” sound clip. I’m sure someone out there will have fun with Wonderful Duck. I didn’t. At all.

Wonderful Duck is available on itch.io, for free (pay-what-you-want).