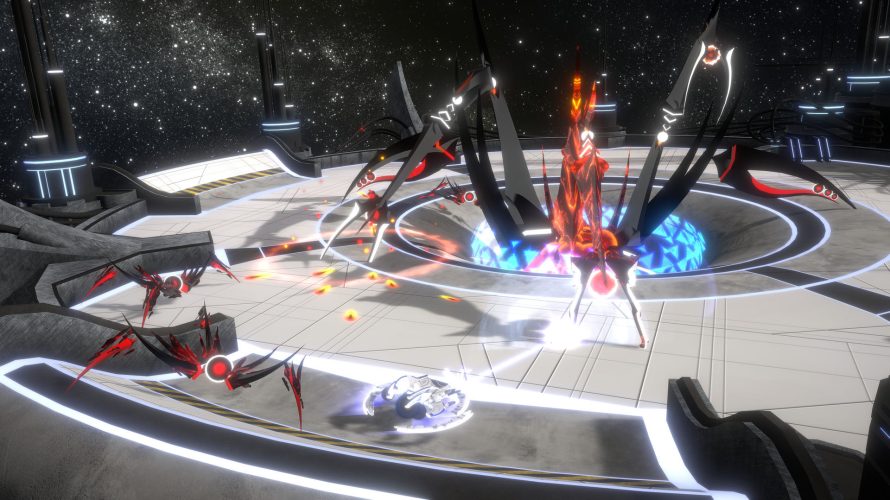 Spiders. For once, when someone decides to get all hostile and nasty and invade somewhere, it’s not aliens yet again, or worse, humans. It’s spiders. Big, nasty, cosmic spiders, and are you really surprised to hear that you’re the only one capable of stopping them with some fancy, fast-paced twin-stick shooting, in Curved Space? I truly hope not, because that’s gonna be quite a wake-up call then!

So, blast invading spiders, save the day, go home – right? Ha! Not by a long shot. Unlike most other genre entries, Curved Space doesn’t restrict player movement to a 2D surface, requiring eager participants in this war to instead navigate warped 3D space. Hmm… wait, warped space, as in, curved? Oh. The title makes sense! Nice.

Battle cosmic space-invading spiders across curved landscapes where bullets hug the terrain while the horizon drops sharply out of sight.

Across asteroids, space stations, and “other intergalactic stages”, this battle shall be fought, until spiders are no more. Which I fail to see anything wrong with. At all. May want to grab some ability and weapon upgrades as you go along, like a flamethrower or a… weed wacker? Don’t give me that look. I didn’t make the game, I’m just covering its release, in all its sci-fi weirdness.

Then, once all’s said and done, the credits have rolled, and so on, the real challenges begin. Plural? Well, yeah. I mean, there’s Arena, with its 60+ randomized challenges and local leaderboards, Survival, which is kinda self-explanatory, Endless, which sounds a bit like the campaign only more and randomized, and last but not least, Daily Run, which has you competing in a challenge that changes… wait for it… daily.

Hope you’re ready to wrap your head around three-dimensional twin-stick shooting because the fate of an entire galaxy depends on your ability to blast spiders in Curved Space.