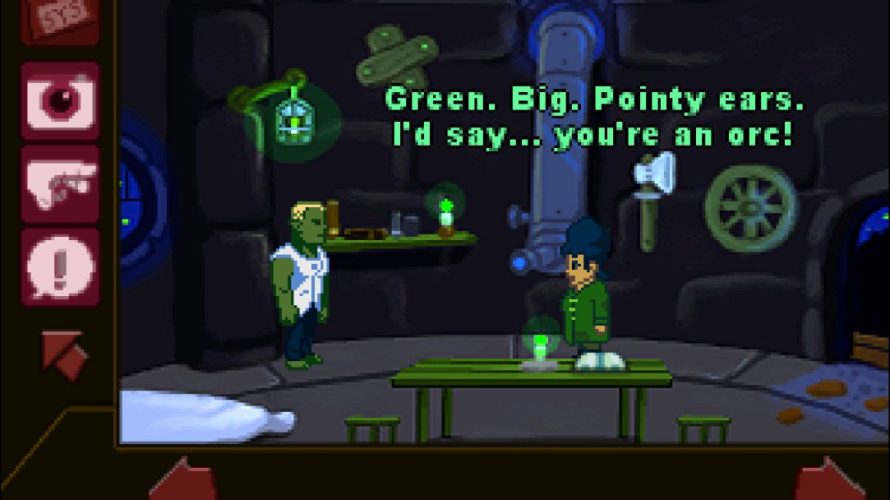 On the most unholy of nights, the undead have decided to leave their graves… again. So guess who gets stuck with the task of preventing a zombie apocalypse? Undra the witch. A witch, of all things, has to duke it out with brain-eaters in this pointy and clicky adventure! Oh what a (boney) night.

More often than not, tales involving zombies today seem to be of the more serious sort. Not quite so here. As the game begins, Undra’s ‘sleep levitation’ is interrupted by her garden mushroom, Mushy Jay, screaming bloody murder. I’m pretty certain mushrooms aren’t supposed to talk… and it only gets zanier from that point onwards. A great evil needs to be taught a lesson (surprise!), meaning there are spells and potions to brew; no rest for the wicked.

There are times when a short, middle-aged lady has to do what she has to do.

Getting this particular witch to do your every bidding is surprisingly easy, thanks to a simple interface with no more than three icons: examine (eye), use (hand), talk (speech bubble). That’s all there is to it. You will also have to manage her inventory, however, which tends to include thoughts about the current situation. These act as a checklist of sorts, reminding you what’s next on the agenda, but obviously not the how part. An interesting design for sure.

Being a witch ain’t easy, so how about helping Undra on her grand quest? Play your cards right, and she might even make a friend or two along the way; something not easily come by, given her… status. Download links for both Windows and Android can be found here, along with an HTML5 version. Keep in mind that it’s a release candidate, so expect a typo or two among other things. That said, since it seemed quite stable, I’d say pick yer poison and get ready for A Boney Night!