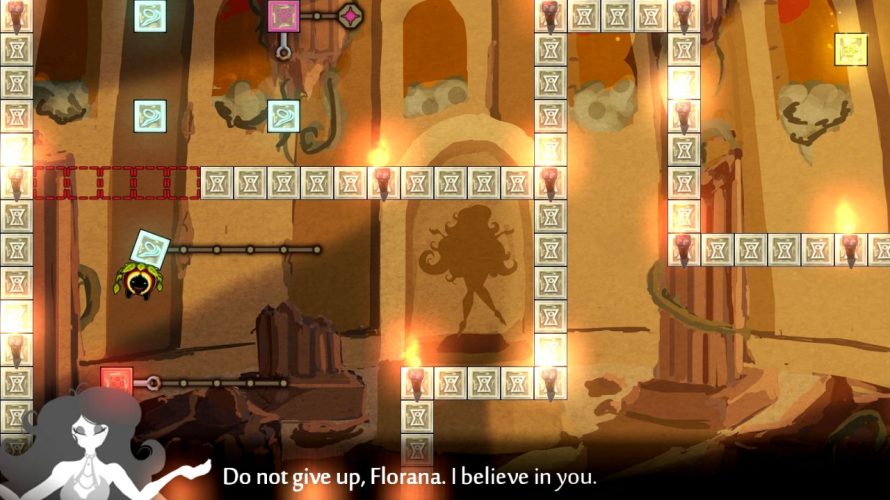 When was the last time a video game tasked you with restoring the power of a fallen goddess? I’ve saved the world countless times and even destroyed it once or twice, but this is a rarity. Needless to say, time is of the essence on a mission of such magnitude, but even so, be sure to collect every last whisper.

In order to carry out this task, Florana has to work from sunset, all the way through the night and straight onto dawn, at which point… wait, no spoilers! Being a bunny/plant hybrid has certain advantages. Not only does it allow for some mighty jumps, but it also lets you latch onto hooks by way of vines. Seeing how each level has you traversing blocks, rotating them to reach the exit, that’s certainly a useful ability.

Upon starting a new game, only Sunset – the first world – is available, but finish that one, and two more will unlock: Midnight and Dawn. Upon completing a level, the next is unlocked, and so on and so forth. There’s no way to skip or otherwise cheat your way past any of them. Why one would even consider doing that in the first place is beyond me, though. 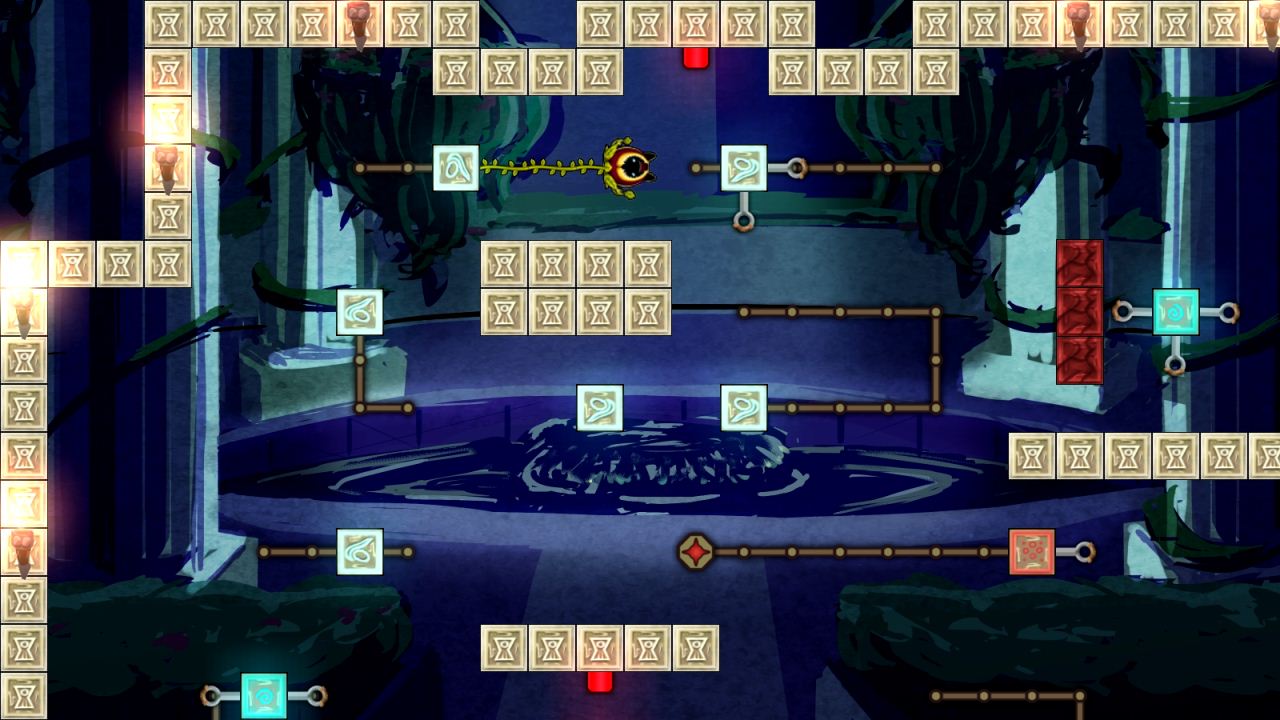 As you go along, the game gradually adds more to the standard ‘rotate and jump’ formula, sufficiently explaining each new mechanic upon introducing them. At first, everything’s simple enough as you move along a predetermined path, jumping from block to block. But soon enough, you’ll be grabbing handles to move blocks otherwise out of reach, hiding walls by manipulating key panels (switch blocks?), and other fun stuff. Individually, these contraptions make for simple puzzles, but once the game starts throwing multiple colored walls at you… that’s when things get tricky.

The sun is rising, but it’s getting darker…

See, latching onto a handle allows you to move two blocks at once: the one you’re firmly attached to, and the one reached by channeling your inner plant. In the later levels, this is used to create some devious puzzles which had me stumped for a good bit. I did figure it out eventually though, more often than not followed by an “oh right!” reaction, as I’d missed something semi-obvious. But in my defense, keeping track of all those buttons, handles, panels etc. is anything but easy; especially in the fourth world. 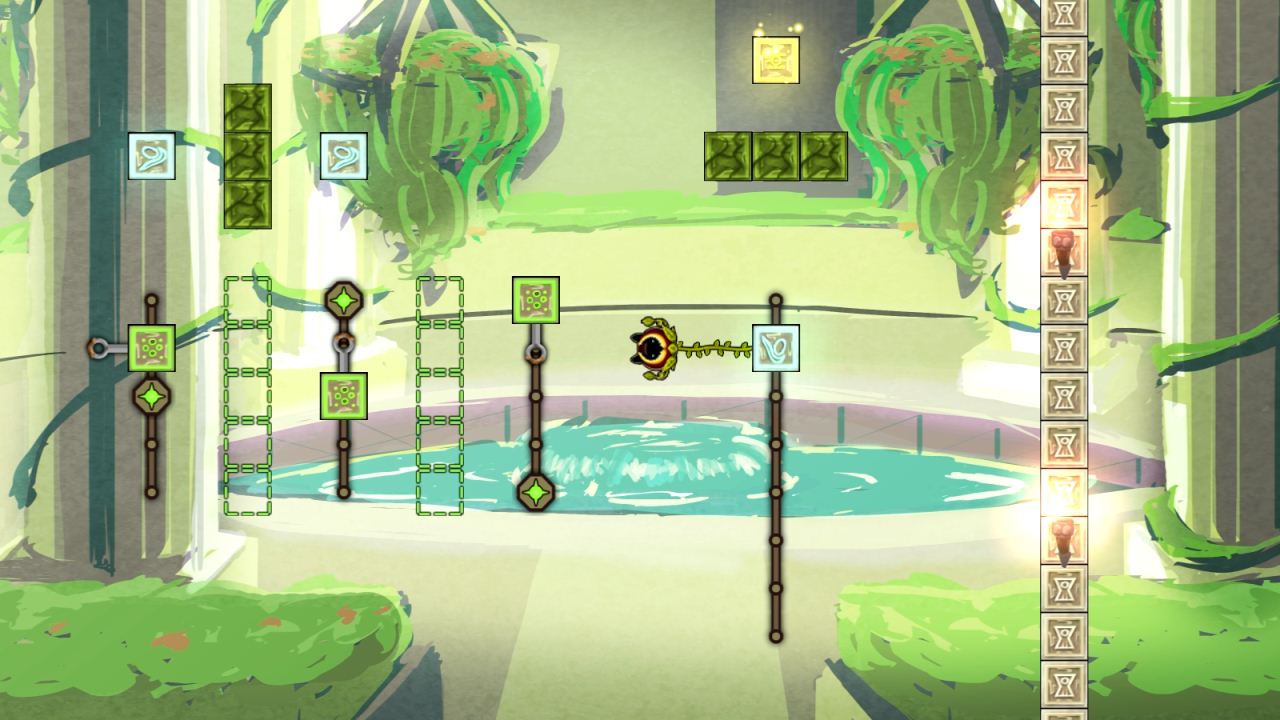 That one’s called Challenge, and rightfully so, as it’s noticeably more difficult than the main stuff! After failing to complete even a single level, I decided that Sunset, Midnight and Dawn were enough for me. I’d [spoilers deleted] and that would have to suffice. Not that I didn’t welcome the added layer of complexity Challenge brought along, it was just too much for me. That screenshot above? Let me know if/when you figure that part out. Like I said: truly a fitting name.

While hardly the longest puzzle platformer ever, it’s better than a game which outstays its welcome, causing most to abandon it long before the end. Besides, there’s always Challenge, if you’re hungry for more upon completion of the main game! So with its great visual style, great music and a $0 price tag, I’d certainly recommend downloading Whispers of The Goddess. Surely you aren’t going to ignore the plea of a goddess?

Whispers of The Goddess - Gameplay Trailer
Facebook Twitter LinkedIn Pinterest Tumblr WhatsApp Telegram E-mail
Previous article Use Magical Concoctions to Battle the Undead In 'A Boney Night'
Next article Make a Splish and a Splash In 'Guppy', Avoid Aquatic Predators