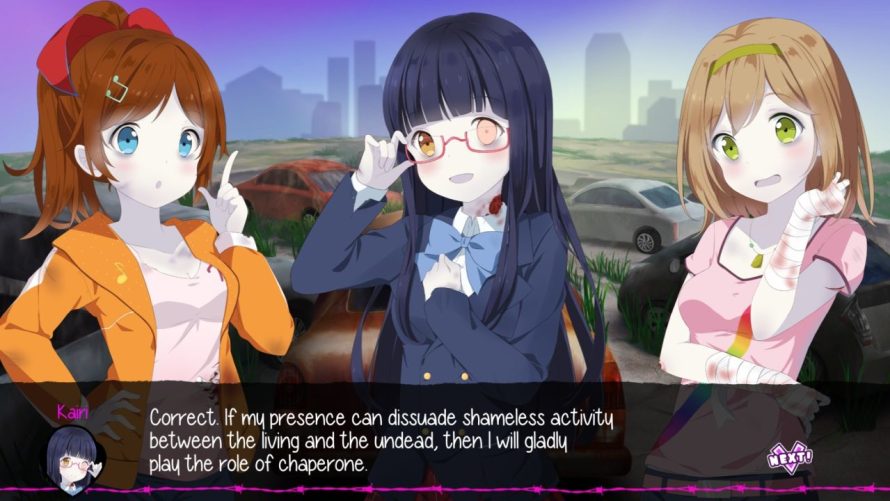 There really ain’t no better way to avoid getting turned into a zombie than by having half-zombie girls handle combat in Undead Darlings ~no cure for love~, however crazy that may sound. As such, instead of kicking you-know-what and taking names, Reggie, the protagonist who’s on a mission to mass-produce a zombie cure, is relegated to the backlines during the action portion of this visual novel/dungeon-crawler hybrid. Still with me? Great. Let’s continue…

So, here’s the thing: zombie outbreak occurred, but in a stroke of luck(?), a handful somehow ended up with their human side intact. In spite of being zombies. Yeah. Video games, ya know? Anyway, even though I am fairly certain Reggie is very much the main character in this story, his role – during the dungeon-crawling sections – can be summarized in two words: loot donkey. I mean, if the girls are going to do all the fighting, what else is there really left for the poor still-very-much-entirely-human? Well, aside from holding the map. Someone has to do that.

Your role as Reggie is to be the girls’ loot donkey and carry the things they find in dungeons. Since Reggie is a human, the girls will prevent him from getting infected by fighting in the front lines! Go them!

But while a yet-to-be-determined amount of kicking, punching, and other combat-related moves shall help ensure one strange enemy after another bites the dust – all of which is undeniably groovy – we mustn’t forget about the visual novel side of things. Even more so since this is where I’d wager the vast majority of Undead Darlings ~no cure for love~‘s story shall present itself, complete with a wealth of choices, wrapping everything up nicely… in one of nine different endings.

With a script spanning more than 300,000 words that’s full of “comedy, slices of romantic life, and the horrors associated with surviving the zombie apocalypse from a zombie’s perspective”, I’d be quite surprised if this rather unusual adventure turns out to be anything but a genuinely good time. Oh, and keep in mind that weapons have limited durability, much like the patience of the half-zombie girls in your party; undead, half or not, are so very fragile, after all. So… brains?

Undead Darlings ~no cure for love~ will be on Steam and Switch, come September 28, 2020.