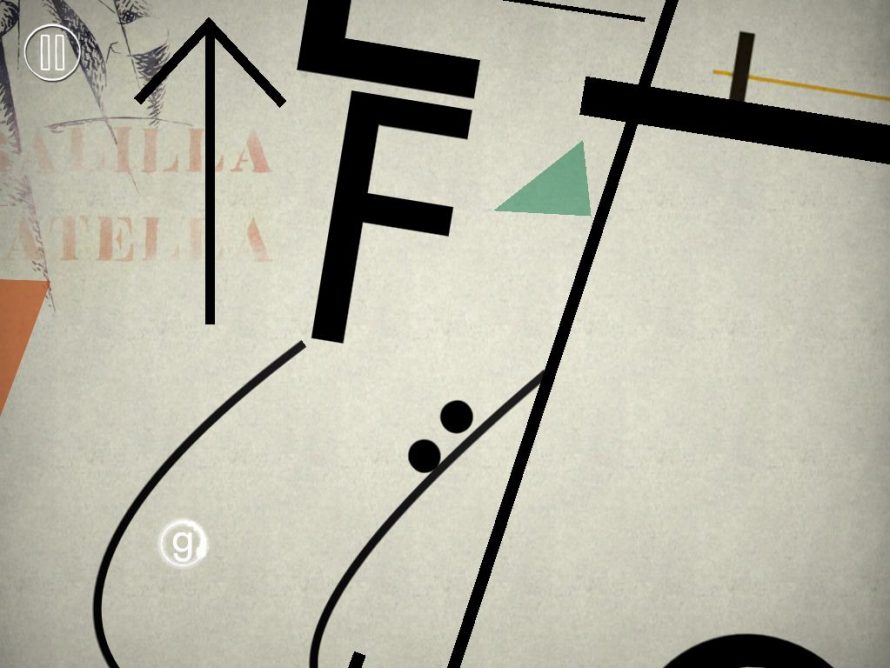 Type:Rider is easily one of the most original platformers I’ve played in a very long time. Didot, Gothic, Helvetica, Times and more… the game takes you on a journey of fonts and typefaces, from the early days of cave wall scribblings to the modern era. Time for an adventure full of education, physics puzzles and… hazards.

The entirety of this journey is experienced as a colon; which might as well be a motorcycle, if not for the whole font thing. Controlling your character (get it?) is easy enough: choose your preferred control scheme, and get ready to roll left, right and jump to reach the exit, after which it’s onto the next level. Actually getting there is a more complex matter though, as minecart rides, momentum-based platforming, electric wires, saw blades, and other troublesome obstacles will have to be dealt with. Fontastic.

In trying to add some depth, there are also a variety of collectibles to grab. These unlock pages, containing information about the current level (read: font). Ever wondered about the origins of Garamond? Be sure to grab that just out-of-reach floating asterisk, then. And if you do end up missing something, as indicated by unlit icons in the menu, there’s the option to replay previously finished levels -- no need to do a perfect run the first time (phew).

To say that the ten worlds -- each of which contains four levels -- are varied, would be a huge understatement. Sure, large parts are made of letters across the board, but beyond that, there’s not much common ground to be found. In one, you may find yourself racing through the wild west (my favorite by far), complete with minecarts and… gunslingers. Remember what I said about hazards? Yeah. Or how about dashing down a snowy mountain? Oh and there’s wall-jumping, because, why not? Like I said: a flexible colon, this is. 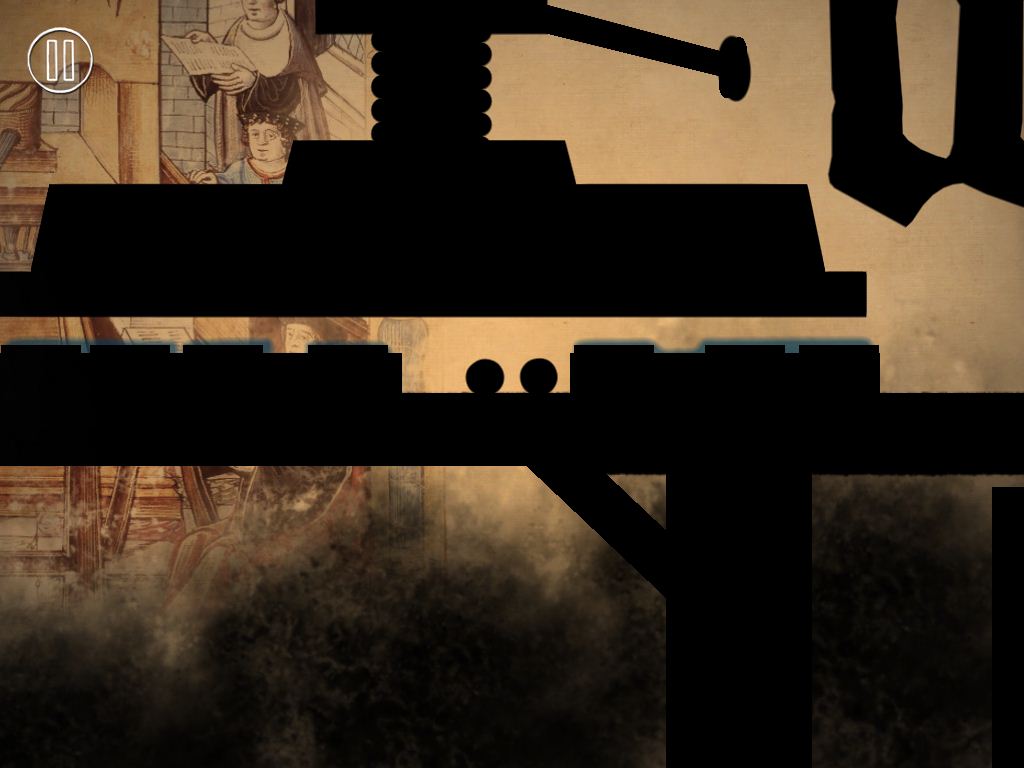 No amount of flexibility is going to save you from being crushed or electrocuted though, and it goes without saying that both are rather unpleasant events, but they are easily avoided. Just take your time instead of racing blindly forward, and you should have plenty of time to hit the brakes. See, momentum is important in Type:Rider, as you’ll notice the first time you descend a steep hill or splash around in the water. In other words, you won’t be able to make the jump from I to K without first picking up some speed, and missed jumps will often send you back to the last checkpoint.

While these tend to be quite forgiving, I did encounter instances where they were just a bit too far apart, causing me to repeat some rather annoying sections over and over. Aside from those infrequent occurrences, it’s not an overly difficult game, collectibles and all. It is, however, an incredibly stylish and almost hypnotic experience. As I traversed the landscapes, learning about a topic I never had a great interest in, it was hard not to get sucked in by the grand design.

Upon reaching the end of each world, I was overwhelmed by curiosity at what its creator had in store for me next. Somehow, each and every last one managed to surprise me; especially the last one, which certainly seemed like an odd inclusion at first. From 30,000 bc to the mid-17th century, all the way through [spoilers deleted], it was by far one of the most varied platformers I’ve played in a very long time; not to mention, most educational. 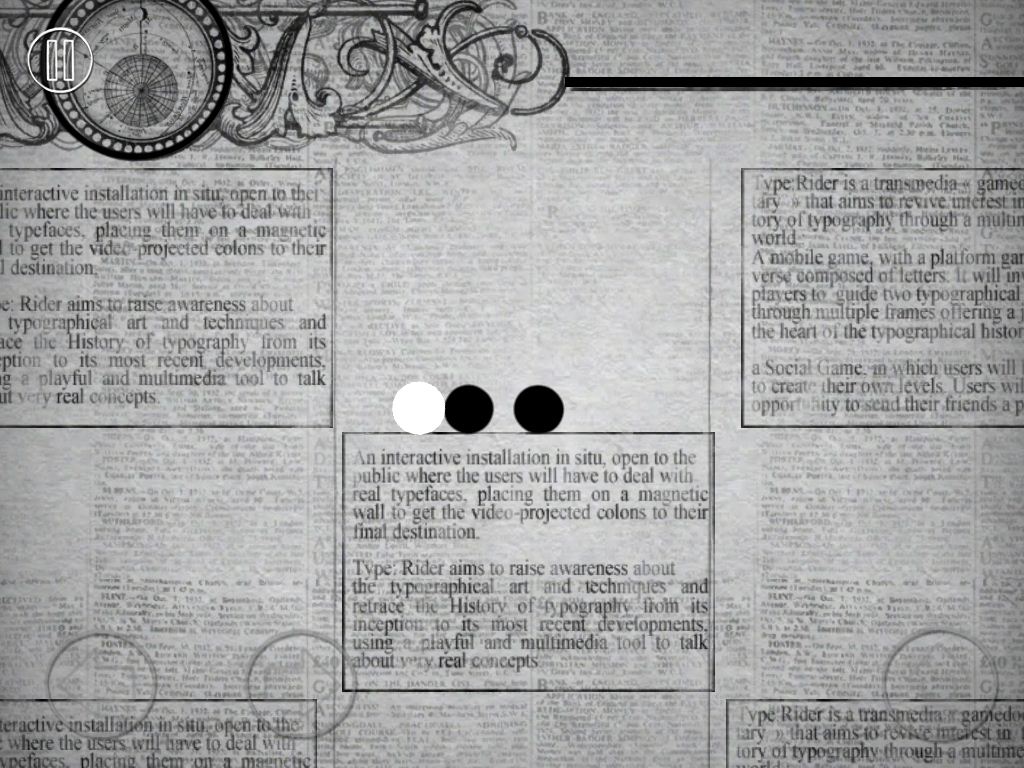 As far as puzzles go, while a diverse bunch, most were somewhat simple, often involving guiding a white ball into the third slot to raise a door near the level exit. There were times when this little thing would be stuck somewhere though, requiring manipulation of the environment, allowing it to roll towards its destination unhindered. That said, the main focus does seem to be more on providing an entertaining, educational and accessible experience, than one of the brainteasers. And if that is, in fact, the case, then surely it has succeeded.

It’s not often that I play through an entire game in one sitting, but that did happen here. Oh, and you’ll want to stick around after the credits. Trust me. But… anyway, the only bad thing about type:Rider, really, is that the controls can be imprecise at times and that as mentioned earlier, certain sections… well, let’s just say some trial and error is involved. Aside from that, it’s a stylish, original, educational and fun journey through the history of typography, and one that should not be missed. Who knows, you might even learn a thing or two!