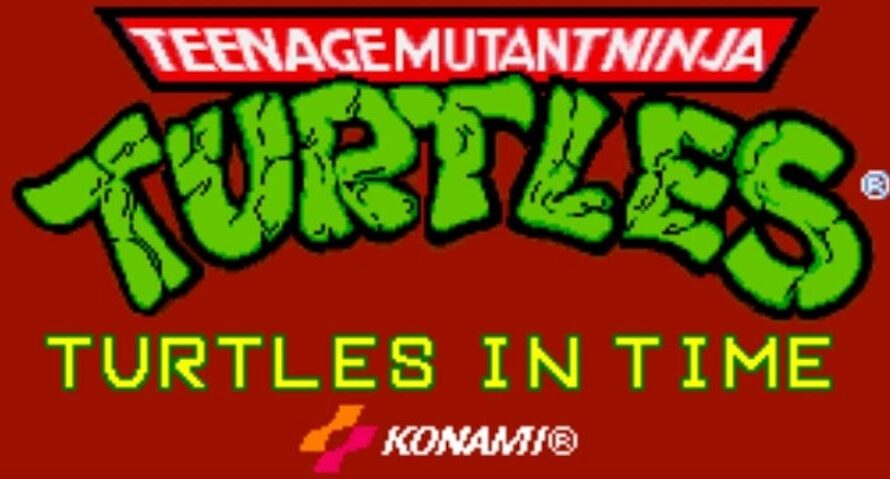 Let me take you back… to a time where everyone was going “Cowabunga!”
Leonardo, Michelangelo, Donatello, and Raphael started out as in the form of a comic book, published by Mirage Studios, back in 1984, and quickly rose in popularity – but it was not until 1987 that it became a worldwide phenomenon with the beginning of a cartoon that would go on for 10 seasons before ending in 1996 after airing a massive 193 episodes.

Unlike the comic book, however, the cartoon was a much more lighthearted and comical experience – often at the expense of Raphael, the grumpy fella in the group – but still highly entertaining and often almost too original in its stories. What I wouldn’t give for a trip to Dimension X back in the day… but what kid doesn’t dream of escaping the boring reality every now and then?

Movie time!
It wasn’t until 1990 however, that the four crazy turtles, along with April O’Neil, Splinter, and Casey Jones, made their big screen debut in Teenage Mutant Ninja Turtles. But unlike the cartoon, the movie followed the darker style of the comics, while remaining highly entertaining. During said movie, fans were also shown the origin of all four turtles and Splinter. Good stuff, even today, 21 years later.

Surprisingly enough, the sequel hit theaters a short year later… and I guess that explains the lower overall quality; I mean come on: Vanilla Ice! The sequel was very entertaining too but in more of a goofy way than what we witnessed a year earlier. Go, ninja, go ninja go!

Which brings us to 1991 where the turtles travel through time…
Before I get started, I would like to warn my readers that the rest of this has spoilers (even though the game is undeniably ancient). That said, let’s talk plot… because this is one crazy ride.

Everything started out nice and quiet, with the gang watching April on the news, but this was a turtles game and as usual… Krang was up to no good – he decided to steal the Statue of Liberty! That alien sure had guts; if that’s even possible considering he’s all brain.
Naturally, the turtles will have none of that, so they set out to stop him – going on a wild chase that starts in downtown New York City at 3 am in a construction site and the game begins. 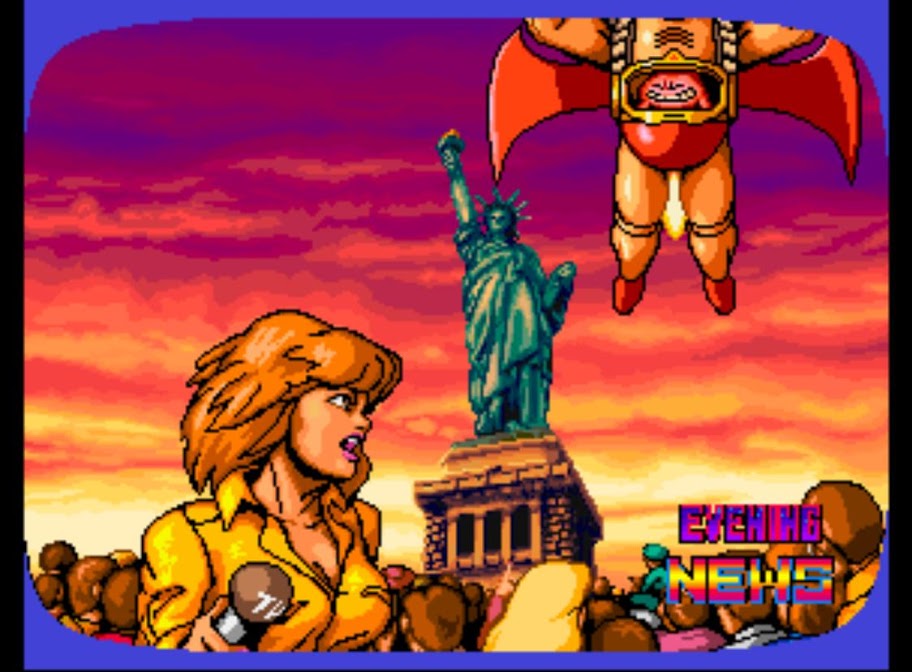 Stay awhile and listen, as I tell you a story of four turtles…
This scrolling beat’em’up classic had a few issues/annoyances, but first, the plot needs more details along with a description of what the four turtles had to face in their mission to get the Statue of Liberty back from Krang. During the first minute or two, progressing was as simple as beating up basic foot soldiers; but the difficulty soon ramped up with the game throwing quite the variety of enemies at the poor turtles. Everything from the purple foot soldiers armed only with martial arts skills (skills… yeah right), to more advanced foot soldiers equipped with shurikens/sword/bows/you name it, to rock soldiers from Dimension X, robots in all shapes and sizes… even creatures that resemble aliens from the Alien movie (is nothing sacred?). 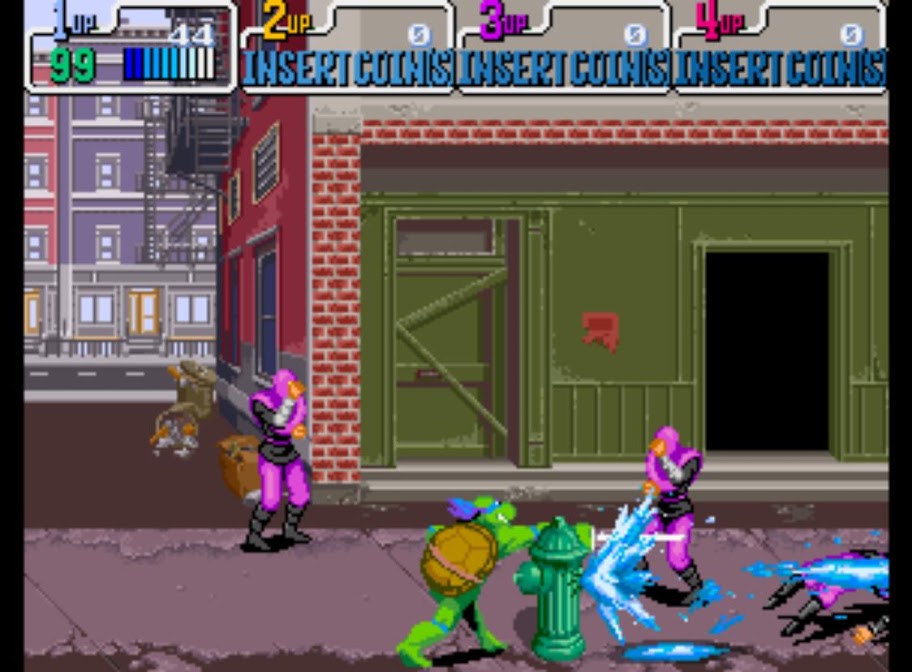 The present
After the first stage, it was off to a random street (presumably still in NYC) to lay waste to more foot soldiers – this time with the help of fire hydrants, because walking in front of water spraying from one such is damaging in a video game… less realism does mean more fun though.

Now you’d think that after two stages, the whole time travel thing would get going, right? Wrong! Once the construction site and street had been cleared, the turtles went surfing.. in the sewers of all places. Odd design choice and one filled with spikes dropping from the ceiling along with mines in the water, plus those aliens I mentioned earlier – really Konami? Couldn’t be more original in 1991? Aliens, foot soldiers, mines, spikes – surfing in the sewers was a bad idea in New York City! 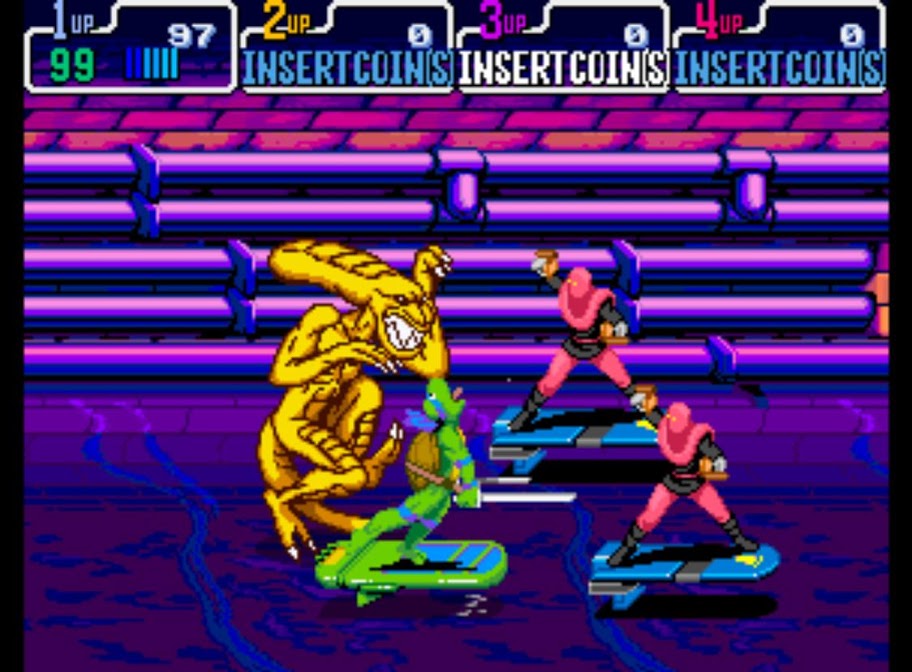 The past
Finally, after surfing in the filthy sewers, Shredder sent the turtles on a trip through time – back to B.C. 250.000.000! So after three lengthy stages with little to no variety in the landscape, the main feature of the game showed itself and without even having to drive a DeLorean past 88mph.

After being sent this far back in time and with no means of returning to 1991, the turtles shook off any time travel jetlag and went on to kick even more foot soldier behind; apparently Shredder wasn’t simply content with sending the turtles back a few hundred million years.. so a few thousand foot soldiers along with Krang’s rock soldiers from Dimension X went flying on the same airline as the turtles. So much for thinking we’d get to fight dinosaurs here… the foot soldiers got to use them as mounts, however. Life wasn’t easy for the turtles.

Continuing their trip through time, after laying waste to Shredder and Krang’s minions in pre-historic ages, the four turtles find themselves in A.D. 1531 onboard a ship at sea, in what was possibly the shortest and most boring stage in the entire game! 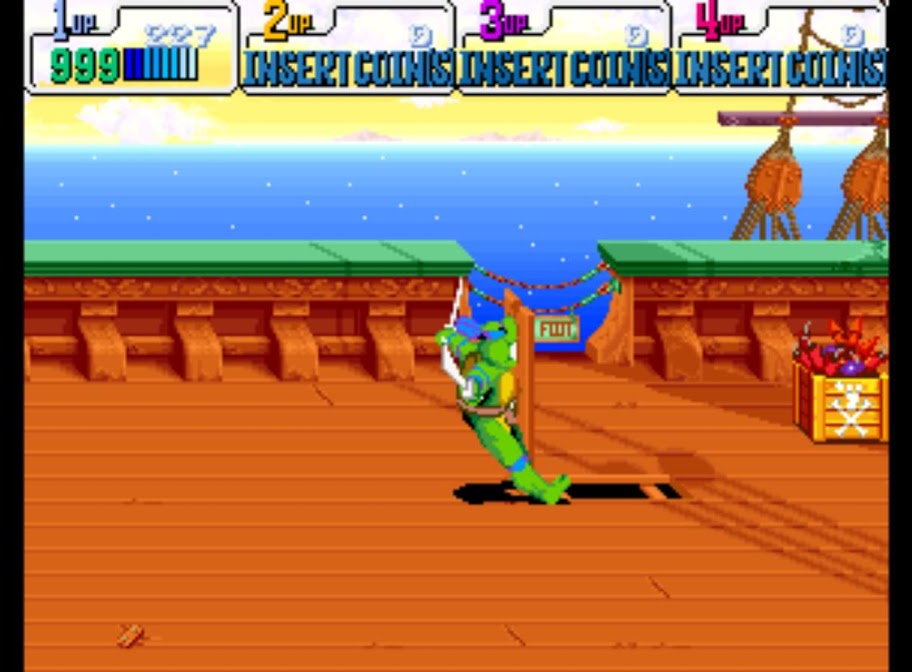 So let’s set sail towards A.D. 1885, put our cowboy hats on and.. kick the crap out of more foot soldiers! This is a TMNT beat’em’ up, after all, so expecting much variety would be silly; though they did upgrade and/or change their weaponry to fit the year of each stage at least. 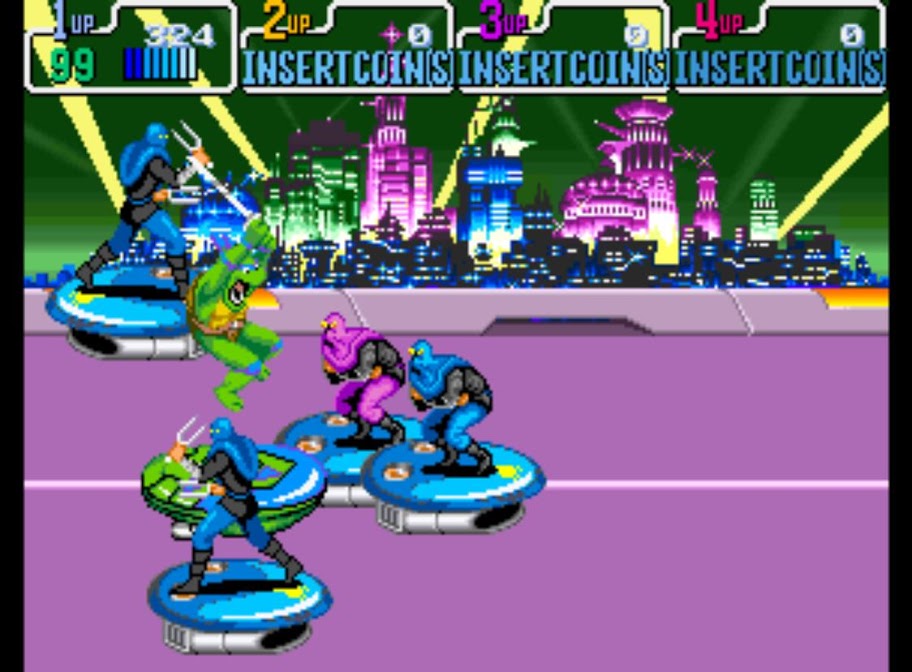 The not-so-distant future…
Once all foot soldiers were six feet under, it was time to head into the future – A.D. 2020 to be exact. A long 39 years after the game came out and 9 years from when this blog was posted. Considering how much this level annoyed everyone who made it this far, and the obscene amount of quarters it drained due to cheap opponents in certain parts, I hope this is not how the future looks for mankind; because last time I checked, the real world had no mutated turtles to save it!

With Krang escaping at the end of the last stage, the turtles went even further into the future, to A.D. 2100 and a level more difficult than the one from 80 years ago. Borderline unfair enemies were all over the place and being a turtle was not so great anymore, but if you’d made it this far (possibly spending your entire allowance in the process), you’d want to see it through. Buttons were pressed, the joystick was moved in all directions (sometimes at once) and frustration was building due to the cheap AI, as the level progressed.

Wrapping up this stage meant destroying Krang’s flying saucer…like…machinery, so at least this time he didn’t simply run off like a little girl! Once he was taken care of, the turtles made it back to A.D. 1991 safe and sound – to face off against the Shredder himself… in front of the Statue of Liberty of all places. It could just be me, but I found this to be a really dull boss battle. Not a good way to end an otherwise great beat’em’up, Konami… and that brings me to beforementioned issues/annoyances. 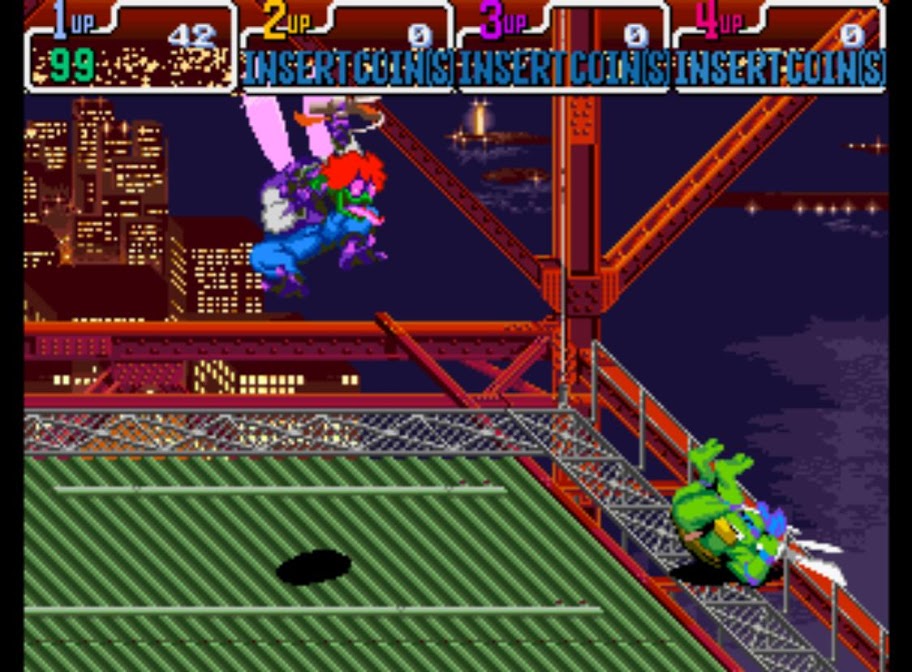 But alas, it was not a game without flaws…
Cheapshots from the AI was not entirely uncommon, though the most trouble came in the form of ranged opponents. Quite unfair to give enemies guns and thrown weaponry, when none of the four turtles had anything of the sort…

The boss encounters were even more of a hassle, some almost unfair (though likely designed that way to suck up quarters) – but with enough persistence (and money), victory was not entirely out of reach; and while frustrating in certain parts the game was definitely not without its fair share of unique little features. I mean, in what other beat’em ‘up – even today – are you able to literally throw an enemy at the screen? I kid you not, you could do that in this one! Add that to being able to pick up entire pizzas for health boosts, hearing cheesy one-liners from the turtles as they pulled off strange stunts (falling into an open manhole, breaking a fire hydrant, etc.) or my favorite: Standing still doing nothing, causing Splinter to run across the bottom of the screen going “Hurry!” several times – getting closer to the screen each time, until from out of nowhere a bomb would fall on the player(s)… tough love from Splinter!

For some reason, every single enemy (except for some boss characters) exploded upon dying. I wonder, was this an attempt at toning down violence (avoiding bloodshed) or simply to show that most of the enemies fought were robots, not living beings? 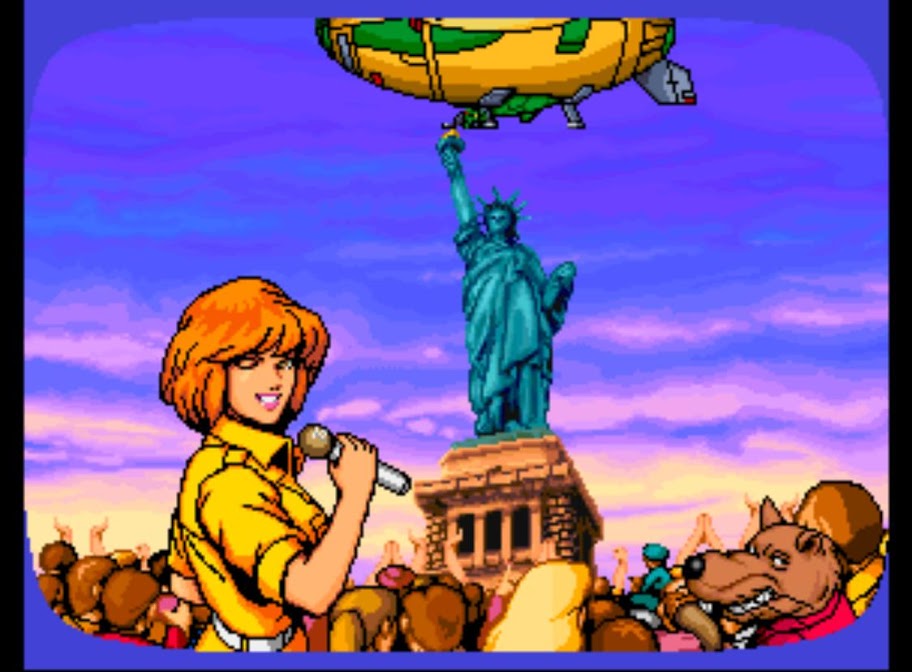 Just the right length for a beat’em’up
My heavily detailed description of the game, from start to finish, may give my readers the wrong impression of it: this is not a long game, quite the opposite. Dying and popping in another quarter to continue, respawned you at the exact same spot – so the only downtime was spent fiddling with the coins. In fact, I recall seeing people wrap up this one in as little as around 45 minutes. But if the game was any longer, I feel it would have overstayed its welcome, great as it is.

So what do you think… cowabunga time?