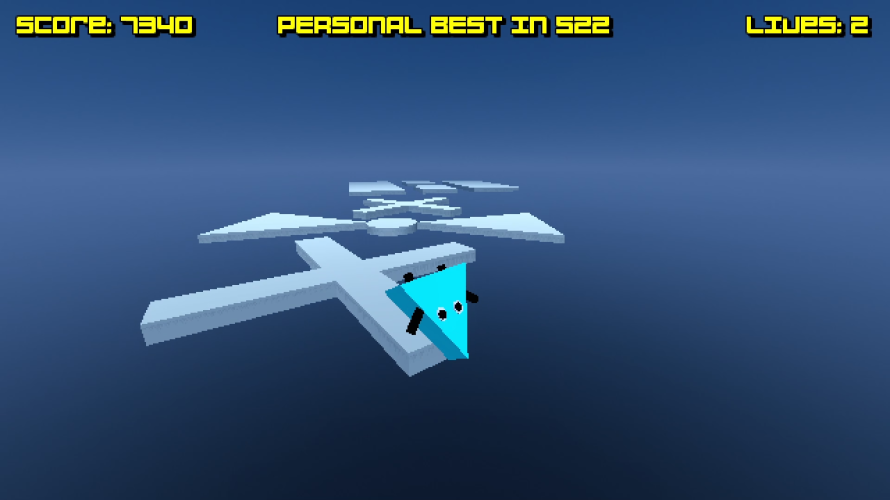 I know what you’re thinking, and you’re right: triangles can’t run. Unless… wait, stay with me. Unless… you give them feet! In which case they’re able to not only run but jump too, crossing gaps and collecting yellow cubes. Such is Triangle Run, Terry Cavanagh’s submission to the STOP WAITING FOR GODOT game jam, and you better believe this one’s a fun little score-chaser.

Super easy to pick up and play by just about anyone too, I’d wager, seeing how all you have to manage is the jump button and left/right navigation. Triangle runs forward automatically at a fixed pace, meaning there’ll be no slowing down or waiting on rotating platforms – when you gotta jump, jump, don’t… wait? Yeah, totally how that quote goes.

Anyway, if this whole setup sounds somewhat basic, well, it kinda is. Or at least that’s what I was lead to believe at first, but sooner (unless you’re me) or later (if you’re me) you’re bound to realize something a lot of other 3D platformers have is kinda missing in Triangle Run. Something related to jumping. Simply put, jumps are performed at a fixed angle/distance, meaning the moment your feet leave the ground, one of two things are going to happen: you’ll land on another platform moments later, or one of your three lives will be forfeit.

Checkpoints aren’t that far between, although you do only get so much use out of them with that quite finite pool of 1ups, so it’s not like you can rely heavily on them. That said, it did still enable me to practice particularly tricky sections – like ones featuring platforms with nothing in the middle or the rotating kind – as while the contents of each run are randomly generated, there are only so many different platforms. Before long you’ll likely have seen most of what’s no offer, unless some are saved for those skilled enough to go well beyond my record of 10243 points, of course.

Some are bound to call it a day at that point and move onto other games, while the dedicated bunch… well, Triangle Run could certainly do with a leaderboard feature. I mean, in the version played for review (1.1), your highest score is reset the moment the game is closed, which is a bit of shame.

Who knows, maybe in a post-jam update? Wouldn’t exactly call it a game-breaking omission as there is still lots of fun to be had, bouncing all over the place and gobbling up yellow cubes, after all. Just… one… more… run!

Triangle Run is available on itch.io.