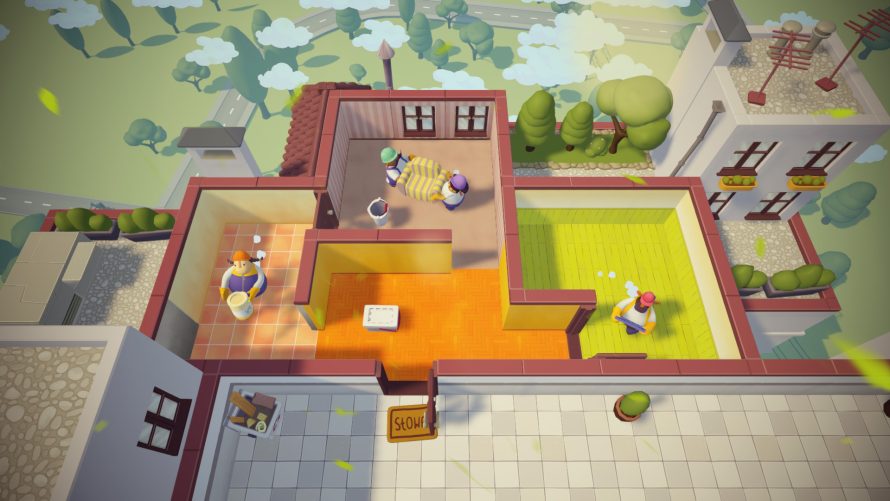 Alright, let’s start with a disclaimer: I have absolutely zero renovation experience. Even so, I’m fairly certain the shenanigans in Tools Up!… are not common practice. But who cares? It’s a video game, and one that looks like an absolute co-op blast as up to four people attempt to work together to renovate what is described by the developer as “mysterious skyscraper”. Oh, you’d rather just get in everyone’s way? This might be the perfect renovation experience for you then.

What I mean by that last bit is that this is definitely more of a party game than a serious co-operative experience, furniture (and other players!) flying across rooms, fire breaking out at a moment’s notice, couches blocking doors, participants… doing backflips… instead of helping. Yeah. I mean, ok, you do have to fulfill certain goals to progress, surely, but that shouldn’t stop you from being an absolute goofball -- sometimes. Especially if you’re the one holding the blueprint, as that gives you, well, a lot of power. As in, control over the camera angles. Oh my.

Just running around and being a clown is still an important role – apartment renovation is a complicated science. Suit yourself.

Hopefully, you’ve saved up some energy playing all those other video games, because in Tools Up!, you’re going to need it. Walls don’t tear themselves down and paint doesn’t magically coat the interior of an otherwise drab room, ya know? Just don’t forget that you are racing time itself as you go about doing your worst to give the skyscraper an extreme makeover. They’re going to regret hiring you -- and your friends -- for the job, and if they don’t, well that’s their problem. Maybe they shouldn’t have hired a bunch of video game characters for this fix ‘er upper then?