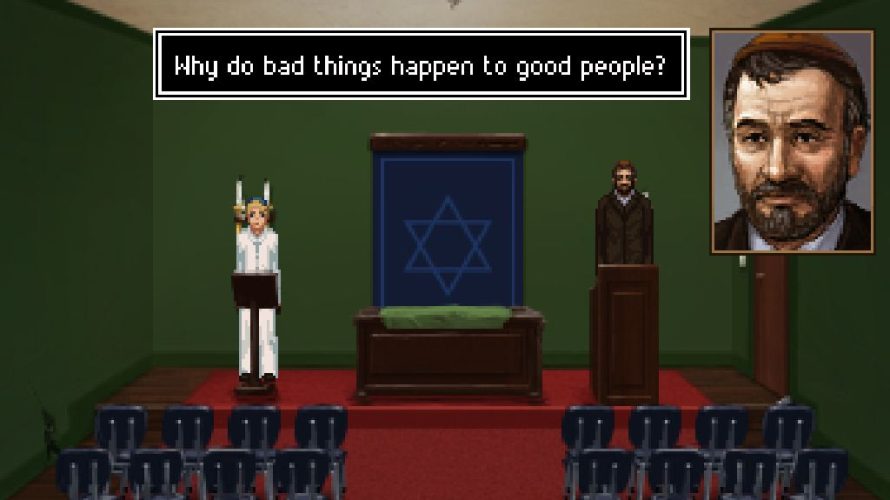 For some, New York is truly the city of dreams, but Russel Stone isn’t feeling it. A rough life’s turned him into a bitter man. Then one day, he receives word that a former member of his congregation has been killed, leaving him with a large sum of money. While certainly a welcome gesture, it does make him the prime suspect in a murder investigation.

Like most adventure games nowadays, The Shivah: Kosher Edition sports a simple context-based interface. Clicking on an interactable object/person brings up a menu with available actions, while a neatly organized inventory holds anything you might pick up. Pretty standard stuff, and then there’s the ‘clue’ feature, which acts as a notebook of sorts, used to help… well, figure things out; something I reckon you’ll be doing plenty of before the credits roll on this whodunit mystery.

WE REMAKE THE WHOLE DARN THING.

Remember back in 2006 when The Shivah first came saw the light of day? No? What’s wrong with you? Seriously though, in a nice surprise, Wadjet Eye Games has decided to remaster their aging adventure. As such, this version has been given a fresh coat of paint, voice acting, and newly composed music to coincide with the visual overhaul; or in not so many words, the definitive version has arrived.

As explained here, the main reason for this ‘remastering’ was so they could port it to iOS devices, as the original was simply too low-res for iPhone displays. Doesn’t mean it’s a mobile exclusive though, as The Shivah: Kosher Edition is also available for PC (Steam, GOG). Although if you’d rather play it on your iPhone and/or iPad, by all means, head over to iTunes and grab the universal app. Something tells me you won’t be disappointed.

So while Russel Stone might actually be guilty of committing murder, are you really going to leave the poor rabbi to fend for himself? The truth is out there – it’s simply a matter of uncovering it.

Shivah: Kosher Edition - Trailer
Facebook Twitter LinkedIn Pinterest Tumblr WhatsApp Telegram E-mail
Previous article Traverse a Parallel Universe In 'Crying is not Enough' to Save Your Beloved
Next article Change People's Lives by Messing With Their Mail In 'Fakteur'