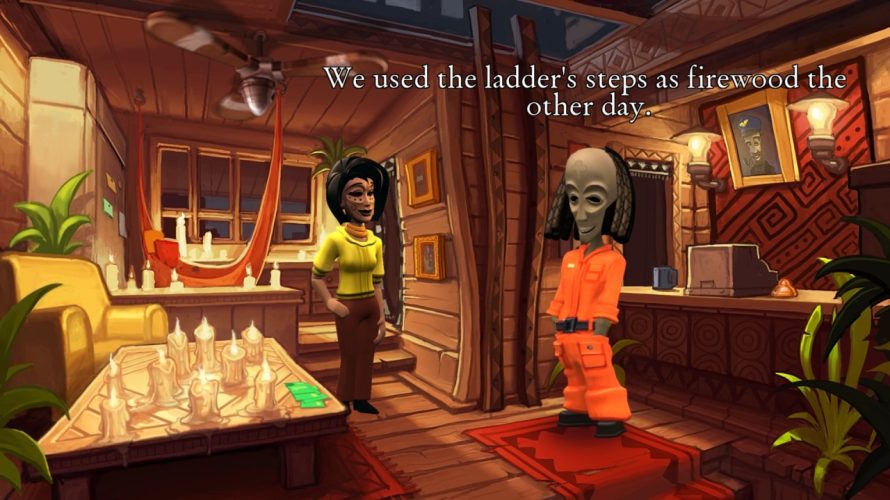 Bwana and Kito, owners of a gas station in Kingsport Bay, are down on their luck in The Journey Down: Chapter One. Power’s been cut because they didn’t pay the bill and no power means no customers, which means… no money (see where I’m going with this?). But all is not lost, as a long-lost journal might provide what they need to get out of this mess: a grand adventure, gas station be damned!

There’ll be no adventuring until their aircraft has received some ‘tiny touch ups’ though, which, among other things, involves… acquiring new engines for it. Needless to say, these aren’t simply sold somewhere nearby either. Since Kito’s busy checking that everything’s up and running – save for the missing parts – it falls on Bwana to acquire the necessities. Time to stir up trouble, chat up the locals, and so on; groovy point ‘n click stuff, ya know?

While its art style is definitely unique, however amazing, the gameplay instead resembles that of a traditional adventure, albeit with streamlined controls. Clicking an object attempts manipulation, while clicking a person strikes up a chat. Using items on something/someone is equally simple: just drag, drop and… magic happens. Magic! 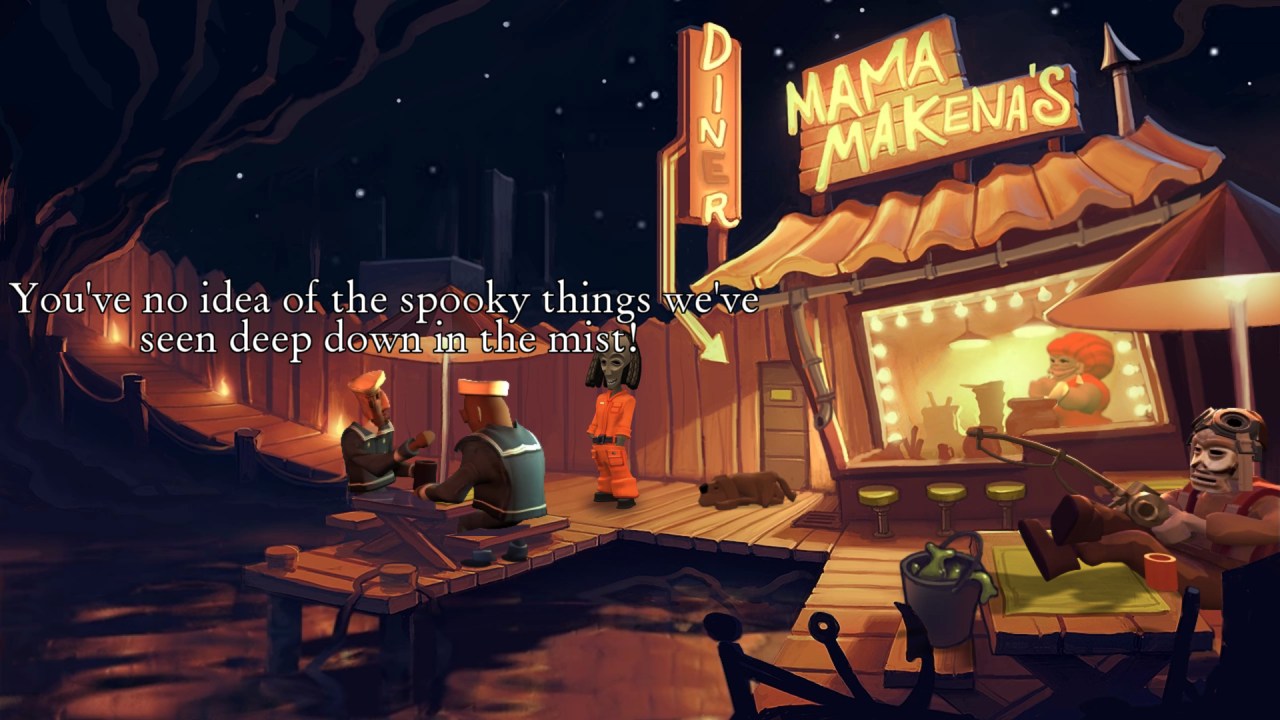 Now, even though Kingsport Bay is hardly a massive area, there’s still plenty to see and do. Mama Makena’s serves the finest stew for example, and who knows what you might uncover at the Gas and Charter? Oh, and you better believe some of the locals have exciting stories to tell if you’re willing to stay a while and listen. Hardly the worst neighborhood ever.

That said, this is no time to kick back and have fun, as Lina, your latest customer, is in dire need of your assistance. See, something fishy is going on in the city of St. Armando (which Kingsport Bay is part of), and she believes the aforementioned journal is somehow tied to it. So on top of fixing up your plane, you’ll also have to locate some old dusty book. Man, Bwana and Kito certainly have their work cut out for them.

Now, as far as brainteasers go, the ones in The Journey Down: Chapter One isn’t likely to have many stumped for long, seeing how its puzzles are all relatively simple. That’s not to say you won’t find yourself wandering back and forth between areas, trying to figure out who to talk to or – in some cases – which button(s) to press when, though. But at least there’s no pixel hunting or otherwise nonsensical ‘combine item x with y’ rubbish. Everything’s logic-based and every item acquired has a use. No pointless inventory clutter, unlike that of certain genre classics. 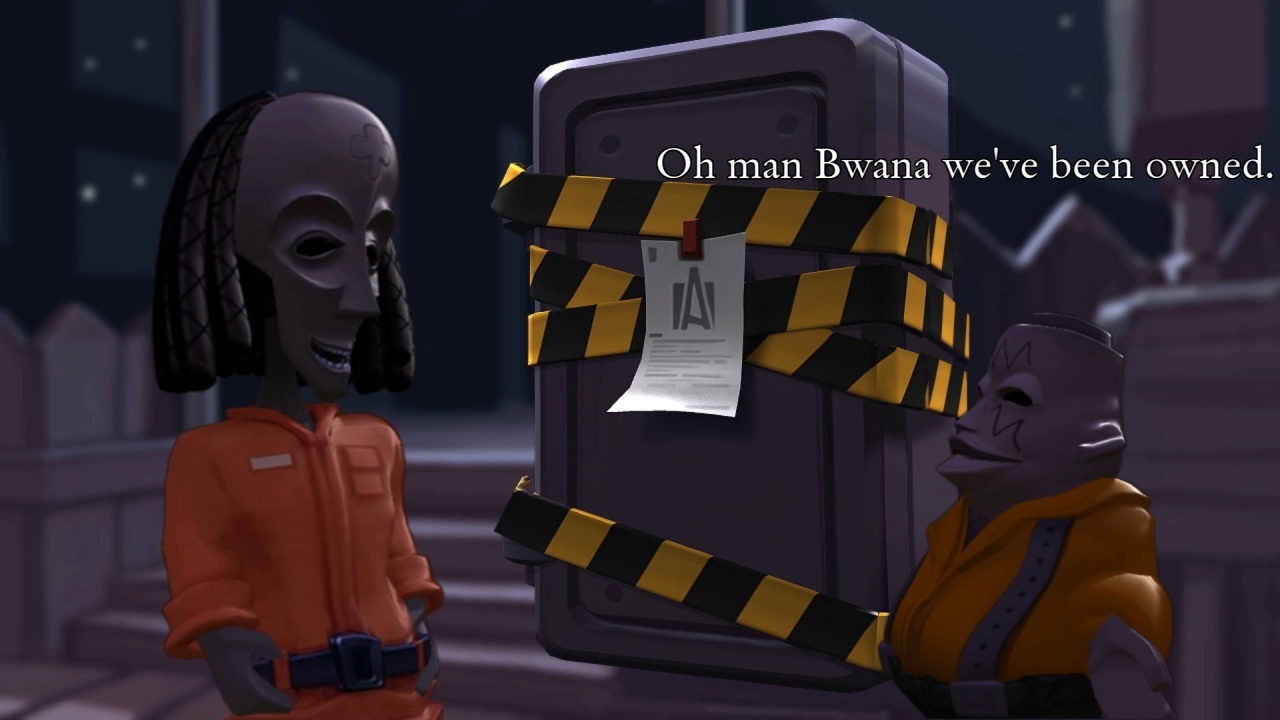 From the uncanny duo of Bwana and Kito to Matoke the chatty fisherman, and a rather edgy chef, the cast is certainly varied, and those are just a few of the individuals you’ll encounter in this first of three chapters. While some are bound to prove more helpful than the rest, one thing they all have in common is some genuinely solid voice acting, as well as plenty dialogue. Speaking of audio, I’d recommend cranking those speakers up to eleven for the music, as the game features some rather groovy jazz.

All in all, I thoroughly enjoyed playing through The Journey Down: Chapter One. Its cast is entertaining if a bit over-the-top, the puzzles aren’t overly taxing, and this first part of the trilogy reveals just enough to make you want more – to find out what’s going to happen. Only downside – and this is highly subjective – is that the game can be beaten in a few hours of solid playing. I’ll take a brief, entertaining adventure over something longer with pointless filler any day though, and this one’s definitely the former. Easy recommendation.