I’m sure that if she had a say on the matter, Rosangela Blackwell (Rosa) would prefer to simply continue her life as a freelance writer with as little drama and mystery as possible. Unfortunately, fate has other plans for her, because not long after her aunt’s death, she starts having frequent headaches to which there seem to be no reason or rhyme. That is, until an old friend of the family suddenly shows up, at which point Rosa’s life gets much more interesting.

Revealing more plot details would likely risk ruining some of the mystery and suspense that plays a big role in The Blackwell Legacy, so I decided to keep spoilers to a minimum – except for what very little is revealed in the screenshots. So, let’s just say that everything in Rosa’s life is not quite as it seems and that there are more things in Heaven and Earth than are dreamt of in your philosophy.

Now, while some point ‘n click adventures are almost infamous for the way they tend to mix things up by throwing puzzles at the player seemingly around every corner, The Blackwell Legacy does things somewhat differently. As I pointed and clicked my way through it, I was greeted by far more dialogue than ‘use object A on object B’ or other brain-teasers and I have to admit, it was a nice change of pace. That and each of the puzzles found in the game were all more or less logical – not once did I have to solve a silly sliding puzzle to open a door, for example. 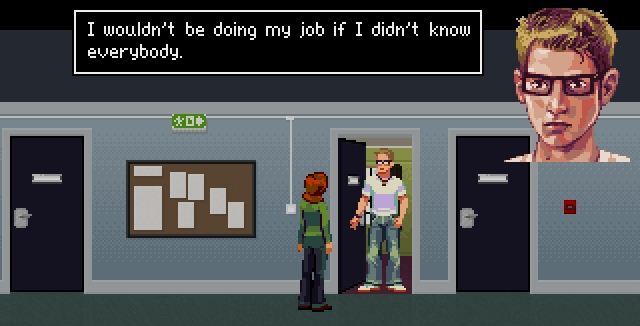 But since that’s just my opinion and as such, I’d like to ask you this: if you had to choose, would you rather have an interesting story where the pacing slows to a crawl whenever a puzzle has you stumped or one that focuses more on revealing bit after bit of exactly what is going on, with fewer puzzles? I’d say the best puzzles are implemented so they don’t feel like they’re out of place or have simply been put there to virtually extend the experience. Leave sliding puzzles, number games, color matching, and audio based brain teasers out of adventure games, unless they’re actually built around them (LOOM anyone?). The Blackwell Legacy manages to walk this line without ever crossing it, and it’s doubtful that I’m alone in appreciating the almost complete lack of ‘inventory puzzles’ (use item A on item B to get item C), even if that was likely caused by the interface design.

Remember how certain Lucasarts classics had a vast array of verbal commands for the player to use? In The Blackwell Legacy, things are much more streamlined, with a two-button context-sensitive control scheme: the left mouse button lets you perform various actions while the right one was used to get a closer look at objects and people nearby. It’s simple, but it works. Inventory management was also pretty basic since the game would only let you use items through dialogue choices. While this was an odd choice, it did mean no trial-and-error (aka. “I can’t do that”) puzzle solving – a win-win situation if you ask me. 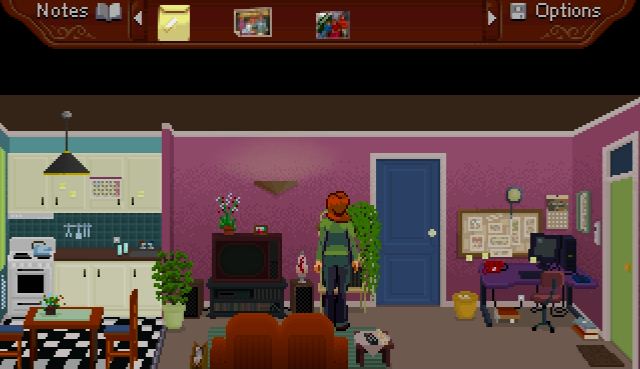 I did try knocking on several doors where Rosa simply told me “there’s nobody home”, but that’s nowhere near as annoying as resorting to item manipulation guesswork caused by an illogical/obscure puzzle. Figuring out what to do next, where to go or who to chat with in order to progress, did leave me somewhat confused from time to time, but never to the point where I was tempted to use a walkthrough. This was in no small part caused by Rosa’s notebook, which she used to store facts or the name of a potential person of interest. Its purpose went beyond that of a mere conversation highlights list however, as you had the option of combining two items in order to try figuring out whether or not a connection could be made between them. Nothing like a bit of detective work, right?

Wrong! After combining the first few notes successfully, I thought this would be an interesting and fun mechanic, but the game soon proved me wrong big time. Had this idea been better implemented, the notebook ‘puzzles’ might actually have been fun, but instead, it ended up feeling more like a trial-and-error based system for the most part, due to there being little to no logic involved. Although, maybe that’s just how it is? I mean, Rosa was trying to piece clues together and not solve a Sudoku puzzle, so it could be that I was simply searching for logic where none existed… 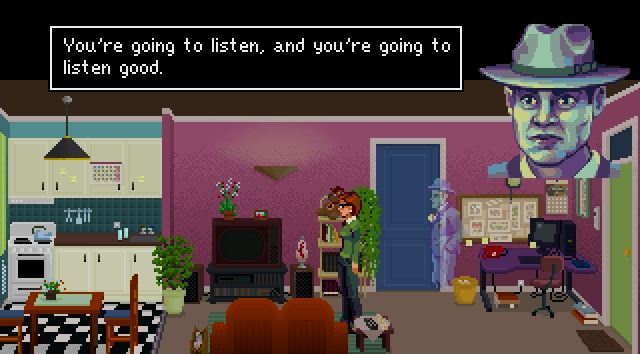 As I’m sure you’ve noticed at this point, provided you haven’t been ignoring the screenshots, The Blackwell Legacy‘s visuals aren’t exactly of the high-resolution picturesque kind, but does that mean it’s ugly? Certainly not. While it’s unlikely that the pixelated style will appeal to everyone, it does have a certain charm to it, especially for those who have fond memories of genre classics like Day of the Tentacle. It’s a shame that the same level of quality isn’t found in the voice acting because while I’d say that most lines were delivered in a believable fashion, on more than one occasion did I notice things like static and audio being cut off mid-sentence. These were minor issues that didn’t drag down the overall experience, and chances are I only really noticed them because I was paying close attention to the story, listening to (almost) every line – instead of simply speed-reading and skipping through the dialogue. One thing’s for sure: they definitely picked the right people to voice each of The Blackwell Legacy‘s many characters.

Whenever the credits roll upon the completion of a video game, most people will either be eager to experience more within the same universe or they’ll feel a need to play something different. Me, I wanted to experience more of Rosa’s adventures, to see what else Wadjet Eye Games had planned for her and… that guy. While the game may have been a bit on the short side, at least it didn’t overstay its welcome and since it’s only the beginning of a saga spanning four – soon to be five – games, it’s hardly a surprise that the ending doesn’t wrap everything up and close the book.

Even though Rosa’s adventures are far from over, sadly we won’t be joining her in the next game since Blackwell Unbound is a prequel with a different protagonist. Won’t stop me from sharing my thoughts on it in an upcoming review though, so do stick around.