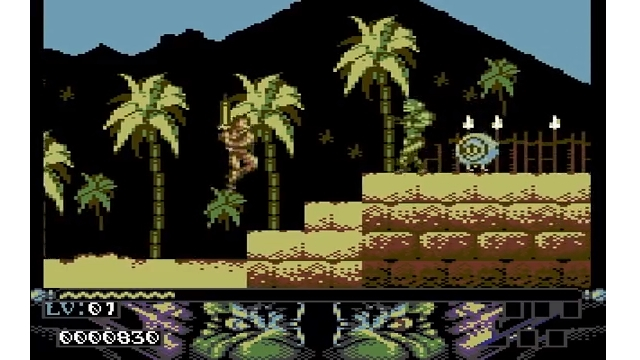 Are you ready to hack, slash and swing a much too large a sword, slicing monsters in half as an overly muscular dude… again? Hope you have a Commodore 64, The C64 Mini, or an emulator for The Age of Heroes, then. Because this one’s so old-school and barbaric that its protagonist would likely just stare at the screen if you attempted to play it on that there fancy PC thing.

While it might not look like much, you have to keep the hardware limitations in mind: Commodore 64 was released back in 1982 after all. A time when gameplay mattered far more than visual prowess, and I’d wager The Age Of Heroes is a prime example of this. That said, the art style is quite lovely, everything animated smoothly, enemies exploding in a puff of smoke and what-have-you, as our hero smacks them with that mighty sword of his. All to defeat some ancient evil or other.

Choose your warrior from the title screen and then hack and slay your way through over a dozen exquisitely detailed landscapes, slaying assorted beasts and monsters that confront you during your quest to defeat an ancient evil that has returned to your lands.

So basically, your classic 2D platformer/sidescroller, albeit one released in the year 2019 – almost forty years after the hardware it was made to run on saw the light of day. Crazy to say the least, but in a good way, and it seems there’s also a rudimentary leveling system in place to help balance the challenge as you attempt to survive its 15 lands and “epic boss battles”.

Hopefully, more of the “COMING SOON!” listings on their website will be available sooner rather than later, giving fans of the ancient (and still amazing) relic that is the Commodore 64 even more goodness.

The Age Of Heroes is available from itch.io, carrying a $3.99 price tag.