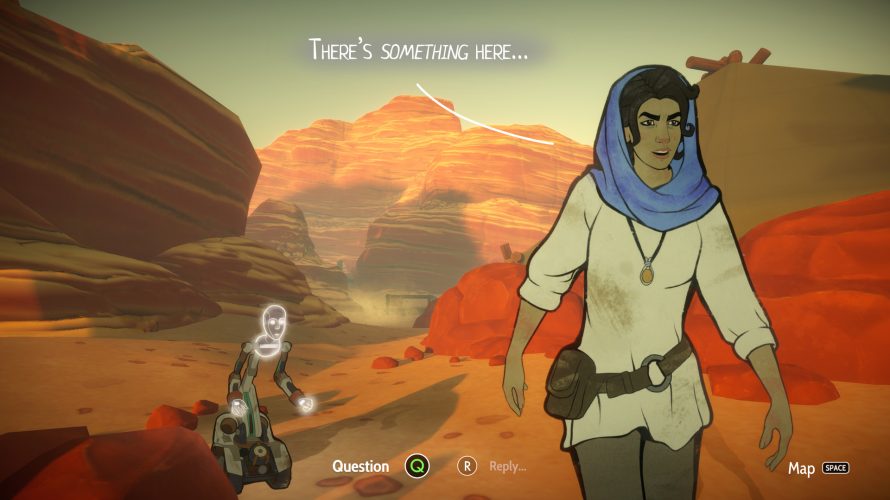 Welcome to the Nebula, a region of space that may or may not play host to long-forgotten secrets (perhaps even that of Heaven’s Vault…). Secrets archaeologist Aliya Elasra hopes to uncover with the help of her robot sidekick, Six. Whether she’s successful or not depends a great deal on choices made by you, the player, in this interactive tale from the studio behind the Sorcery! series and 80 Days.

Something tells me Aliya Elasra will be able to give even Indiana Jones a run for his money in the field of archaeology, what with a slew of advantages not even remotely available to the popular adventurer and all. Doesn’t guarantee her success though. That will only come if she works hard enough, figures out how to piece together clues as they appear, and of course, if the player makes all the right choices. Because this tale is likely as full of dead ends as branching paths, boasting a “fully adaptive narrative” that “remembers every choice you make”. Groovy stuff.

When a roboticist from the University of Iox goes missing, Aliya begins a trail of discoveries that will lead to the very edge of her world – and the ancient secret of Heaven’s Vault.

Because of this, it’ll likely be difficult to decide who to trust, the web of plots and subplots growing ever larger and more complex. Doubly so since no action will be forgotten, and I’d wager there are people in the game one would do well to avoid pissing off. The history of the world awaits, in lost ruins and ancient sites, transportation apparently consisting mostly of floating down something called “space-rivers”. Next stop, Heaven’s Vault!

Heaven’s Vault is available on Steam and PlayStation 4, carrying a $24.99 price tag.