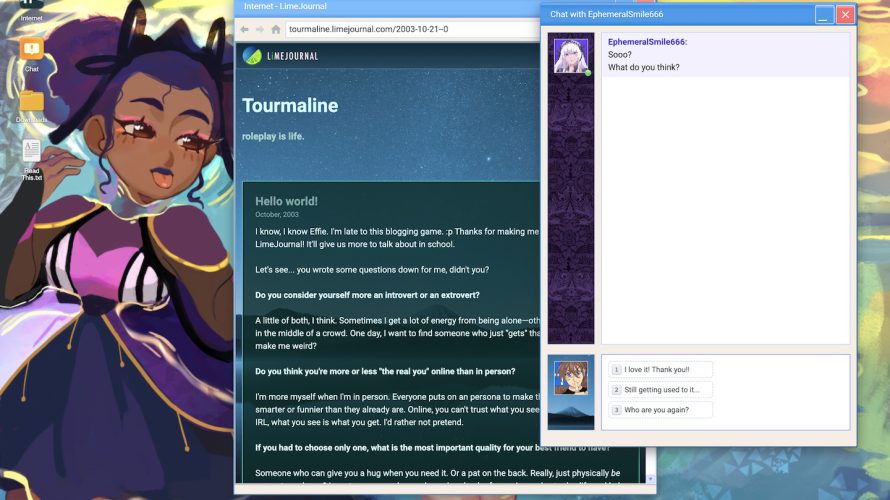 I still remember the early 2000s. Especially how the internet was back then because man, was it ever a different beast! Discord? Instagram? Steam? Twitter? No. Nope. None of that. Well, maybe Steam, but not until 2003. Anyway, Terranova takes place during those years; a “nostalgic interactive fiction game”, as it were. Four fangirls, LimeJournal, and… a lot of roleplaying.

Now, first things first: eating disorders, depression, and underage drinking is depicted and/or discussed – albeit entirely in text. I’m not entirely sure why Steam places the ‘Mature Content Description’/Content Warning section at the bottom of a game’s page, as much like written articles, not everyone reaches that point before moving on (or in this case, hopefully, buying the game in question).

That said, with three unique endings, a choice-driven narrative, and the promise of both romance and drama, Terranova might seem like a (mostly) chill slice-of-life experience between a group of like-minded friends. But “plot twists galore” is also mentioned in its description, and… well, that stuff in the above paragraph. I have no doubt that Ephemeralsmile, Cherrygoround, and Sendaria are all great girls though, and that no matter which direction conversations take, fun times will be had by all involved.

Have you ever longed for the days of Web 1.0 when you made faraway friends through forums, talked endlessly online, and spent hours tweaking your website to perfection?

Whether you’re blogging on LimeJournal, chatting up a storm on the fully functional – for the early 2000s, anyway – IM, clicking cards away in Solitaire, or something else entirely, something tells me Terranova is going to be a good time. Hopefully, I’ll get around to experiencing it first-hand, sooner rather than later. Because goodness, not only do I miss those days, but I’m also quite the sucker for a good nostalgia trip. Especially in regards to this combination of tech and software.

Terranova is available on Steam and itch.io, carrying a $24.99 price tag.