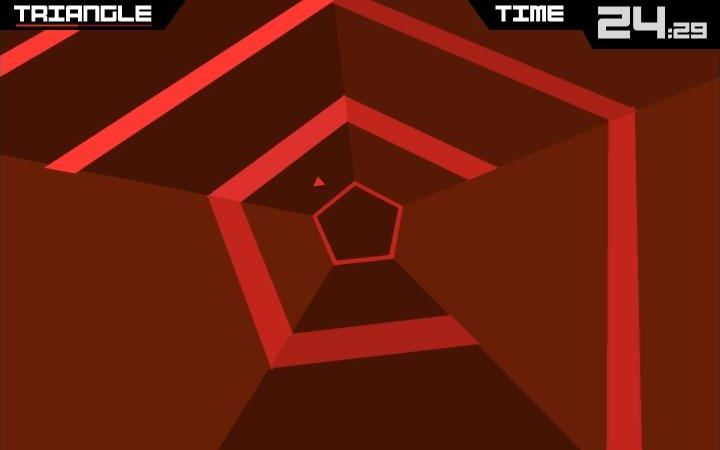 Since I’m without an iOS device, I’ve got but one thing to say about this release: WOOHOO! Actually, that’s not entirely true. I do have plenty to say about it, including how awesome this game is (like you didn’t know that already), but this a news piece and ‘someone’ told me that people prefer those to be short (not bloody likely!).

Like so many other popular games these days, this one also started as a far more basic flash game, which is playable here ($0). But then the game started to change and Hexagon evolved into something bigger and better: Super Hexagon! At its core, it’s an arcade game in many ways, and one that’ll definitely put your reflexes to the test, but the merciless difficulty doesn’t lessen the experience at all. It probably would if each attempt at it was more than a bite-sized trip, but as it stands, Super Hexagon is both difficult and fun. For some, it might be more difficult than fun, but as I’ve said in the past: It’s refreshing to play a game that’s actually challenging for the right reasons.

Super Hexagon was originally iOS exclusive and while it’s still available on iTunes ($2.99), thankfully Terry Cavanagh recently wrapped up development of the PC and Mac ports, both of which are now available on Steam for $3.00 (and -33% during launch week). Since Gaming Momentum has finally been launched, it’d be silly of me not to point out that thanks to Thomas Faust, we actually have a review of Terry Cavanagh’s crazy hexagon game.

Don’t forget to check out Terry Cavanagh’s devlog and Twitter.