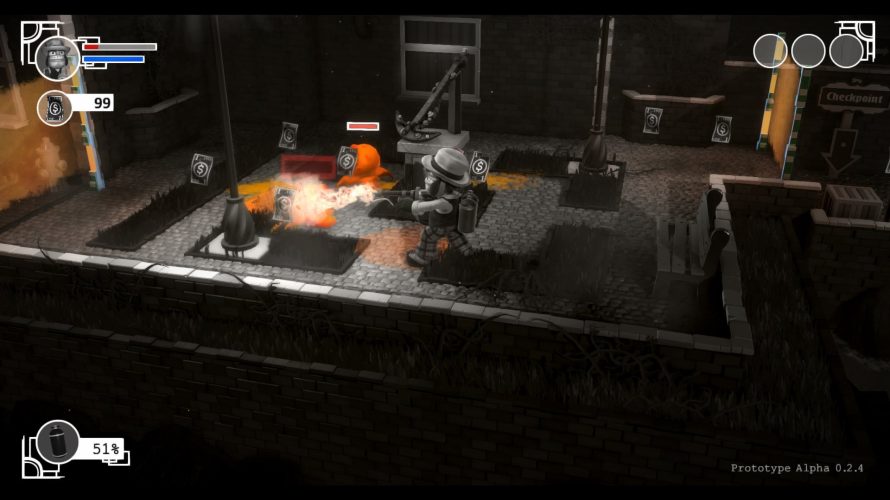 This time the spotlight will be shining on Timothy vs the Aliens, the tale of a gangster amidst an alien invasion (because craziness). Let’s break it out of Greenlight limbo!

Timothy vs the Aliens is an adventure and platform video game where you will play the role of a gangster named Timothy, who lives in a black & white period and fights against the full-colored aliens that have invaded his city. The aliens have come to Earth looking for any living thing to eat and they are terrorizing the city.

This one kinda got me thinking: what if the likes of Capone went up against aliens? Who’d win? What’d happen? And most importantly, who’d direct the movie adaptation of what’d likely be a glorious battle? Not that Timothy vs the Aliens has any relation to that, mind you. Or maybe it does? Either way, there’s only one way this is going to end, and the path is laid with platforming, shooting – lots of shooting – and dead aliens – lots and lots of dead aliens. Also, that art style. Look at the trailer below. Trust me, you’ll be glad you did. Bet ya Timothy will too. Aliens though, not so much. What? It’s true. Dumb aliens..

So riddle me this, dear reader: why do YOU think Timothy vs the Aliens hasn’t made it through Greenlight? The game won’t be out until 2017, but even so… how about visiting its Greenlight page and handing over a ‘yes’ if you like what you see? Remember: your vote could make all the difference!

Facebook Twitter LinkedIn Pinterest Tumblr WhatsApp Telegram E-mail
Previous article It's Human Against Leshin, Magic Against Nature In 'Echoes of the Fey: The Fox's Trail'
Next article The Greenlight Groove: 'ClockWork' and... more!