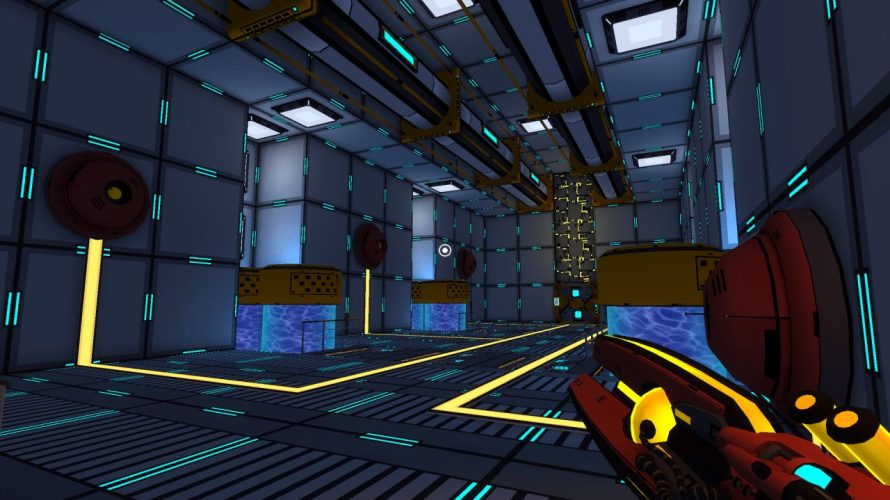 This time the spotlight will be shining on Inverto, a first-person puzzle platformer (try saying that three times fast!) – one that’ll make your head spin… and turn everything upside down in the process. Let’s see if we can’t help it escape the cold emptiness of Greenlight limbo.

You play as a private detective, ex-Space Ranger signed up on a dangerous testing experiment, in an attempt to find a researcher in Gravity Labs facilities and uncover an evil conspiracy, mandatory, in such cases. Proceed all of the testing areas with your trusty gravity gun (some resarchers gently call it ‘Gravitron’). Prepare to explore Escher-esque spaces and solve navigational puzzles by changing gravity direction, employing body momentum and fighting nausea (only if you have weak vestibular system), pushing boxes and carrying a lot of different keys.

Keys? KEYS?! Better not be a bunch of colored keycards, because I’ve had it to here with those things (remember Doom? exactly). But seriously, I like the idea of getting to solve puzzles by messing with gravity. Ceiling? Not anymore! Now it’s the floor. A wall? Nope. Ceiling. All the environmental rotations might make some people dizzy, and while that’s a shame, it’s also kinda inevitable with a game like this. As for the rest, I’m hardly alone in being eager to play a first-person shooter that doesn’t revolve around killing terrorists, zombies, or… performing lethal actions, period. That said, I don’t like the look of those laser grids. Those things always give me freaky Resident Evil (first movie) flashbacks. Slice ‘n dice. Yeah.

So riddle me this, dear reader: why is Inverto still struggling to get through Greenlight? Only an alpha is currently available, but I’m sure it’ll reach that important final stage of development soon-ish. If you haven’t done so already, might I recommend visiting its Greenlight page and handing over a ‘yes’, if you like what you see? Remember, your vote matters!