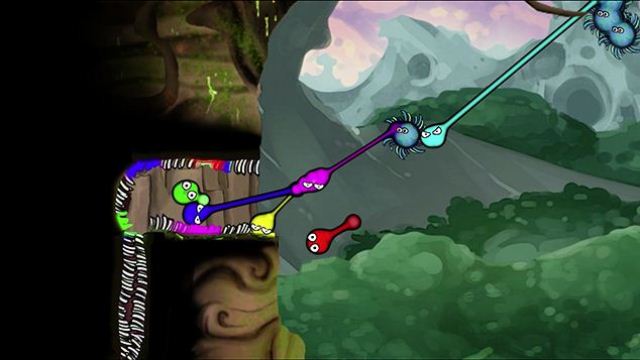 This time the spotlight will be shining on Grabbles, a fast-paced multiplayer (and single) physics puzzler, flinger, racer, grabber… you-name-it. Let’s see if we can’t help it escape the cold emptiness of Greenlight limbo, eh?

Grabbles is an arena based platformer centered around an unconventional movement mechanic instead of the usual running and jumping. Each grabble is equipped with two sticky appendages that are used to grab onto the environment and other players in order to move around the world. Destroy friendships and make life-long enemies as you battle in deadly trap filled arenas. There’s nothing more satisfying than pulling your friends backwards at the last second while propelling yourself to victory!

Not gonna lie, I love the part about destroying friendships and making life-long enemies. Too few games let you do that nowadays. Too few, I say. Also, who doesn’t like flinging a colorful gooey figure along, latching onto whatever’s nearby, be it a wall, a branch, or maybe even another player? Sounds like a good time to me for sure. As I wrote in my initial coverage of Grabbles, there’s something for the single player crowd too, although I suspect… multiplayer is where it’s gonna be at. Both do play differently enough to co-exist, however, as a lone wolf will encounter more of a puzzle-y setup while playing with other people turns the experience into a fast-paced – and at times hazardous – race. Oh, and it’s not restricted to local multiplayer either, as even the demo (link below) has online features implemented. Time for some… Grabbles!

So riddle me this, dear reader: why is Grabbles still struggling to get through Greenlight? It’s not out just yet, but a demo is available. As such, how about visiting its Greenlight page and handing over a ‘yes’, if you like what you see? Remember, your vote matters!