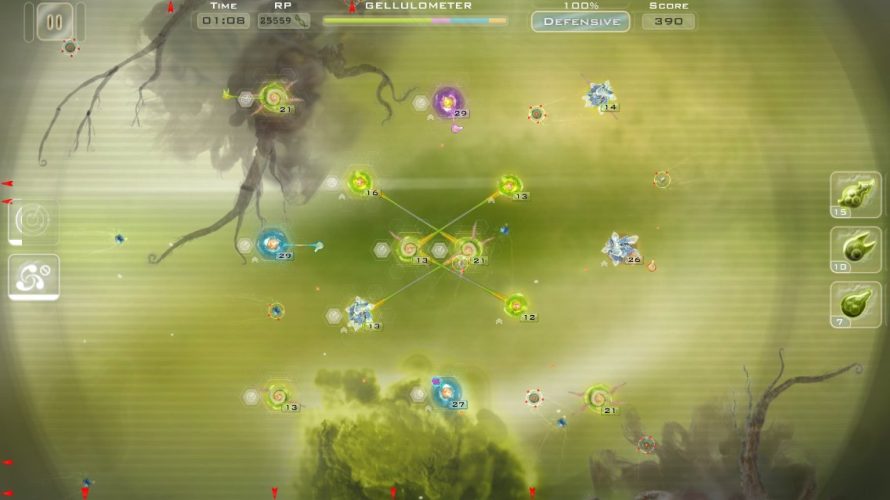 This time the spotlight will be shining on Gelluloid Pro: Micro War Strategy, a fast-paced tactical bout on a… microsocopic level! What say we help it escape the cold emptiness of Greenlight limbo, eh?

Welcome to project Gelluloid, doctor! Challenge yourself and prove your tactics skills in this fast-paced, action-strategy game. Join the Gelluloid science lab. Declare war to viruses and fight off gel opponents in microscopic battles!

Ah, nothing like a little germ warfare to get the blood pumping! I suspect this battle will take more than adrenaline to win however, as the developer highlights an AI which is “analytical”. Creepy and potentially awesome at the same time. On top of that, the game seems to feature a nice blend of RTS and tower defense, with a bit of tug-of-war in the mix, as you attempt to fend off one biological assault after another, pushing back and forth among the ranks. Interesting to say the least. Only negative is that apparently, Gelluloid Pro: Micro War Strategy won’t be released until greenlit; which it should have been long ago… ya know?

So riddle me this, dear reader: why is Gelluloid Pro: Micro War Strategy still struggling to get through Greenlight? It ain’t out yet but should be at some point. For now, how about visiting its Greenlight page and handing over a ‘yes’, if you like what you see? Remember, your vote matters!