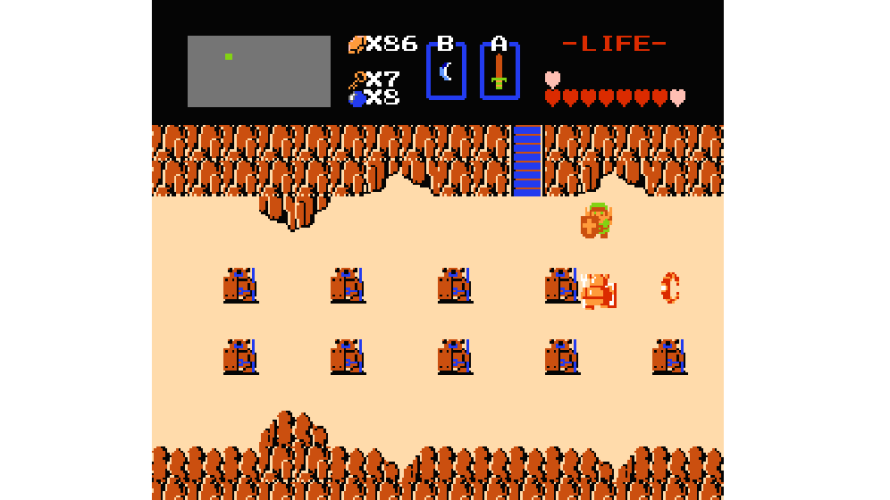 Since The Legend of Zelda was not meant to be finished in one sitting, Nintendo included a save mechanic. It was not a “save anywhere” feature, however, nor did it let you save in multiple slots (just like most NES titles).

If there were multiple slots for anything resembling save games in a NES title, they were for creating different profiles as opposed to multiple save games on the same profile. Three in the case of the first Zelda game, though I think most people only used one.. the other two were most likely meant for when a friend (or two?) borrowed the game and you did not want them deleting your profile/save, just so they could play the game entirely on their own accord.

Dying in this game is a really bad thing, but for some reason, it’s also the easiest way to save (what the..?) your game. Upon death, just like when loading your save, the game teleports back to where you first started out at the very beginning, with only your initial 3 hearts filled.. no matter how many you have total! How’s that for old-school difficulty?

Not only do you have to make it all the way back to where you were.. you also have to refill any hearts above the initial 3 you had, by going on a monster-slaying rampage, as that is a fast way to refill hearts – every so often a slain enemy leaves a heart behind.

There is an alternative way to refill those hearts though, which is definitely the better way if you have a lot of them: Visit a Fairy Fountain – that is, if you can find them and are able to get there in one piece; not easy with 3 hearts! Approaching the fairy within completely heals you. Quite generous, I must say.

Getting around can be a pain because there is no way to teleport/warp to locations. No shortcuts! Better bring water and food, because you’ve got some walking to do. You get to keep your items and rupees, so if exploring is on your mind after dying instead of trekking back where you were upon death, you are free to do so.

For those not familiar with the franchise, rupees is the currency and the easiest way to acquire wealth comes from killing monsters. They are mostly needed for stocking up on consumables from vendors, found at specific locations in the world. Though the feeling of being on an important quest may stay with you throughout the game, it is highly unlikely that you will ever feel like you have accumulated enormous riches, since the economy does not play a huge part.

It’s amazing how I’ve been going on about this game for so long, and have yet to mention the music! The soundtrack, especially for an 8-bit game, is on an epic scale. It has some of the most memorable music ever, right up there with games like Super Mario Bros. and Castlevania, all of which have had their music remixed many times over the years and enjoyed by countless people.

Time to wrap this up, as I want to keep my posts free of spoilers to the best of my ability and.. if I say more about this game, I’ll likely wander deep into spoiler-territory – there are plenty spoilers at GameFAQs if that’s what you’re after.

Thank God for this, to help refresh my memory while putting this trip down memory lane into words on my blog!

Facebook Twitter LinkedIn Pinterest Tumblr WhatsApp Telegram E-mail
Previous article A Trip Back To 1986 With 'The Legend of Zelda'
Next article Is 'Bubble Bobble' Too BASIC? (Review)