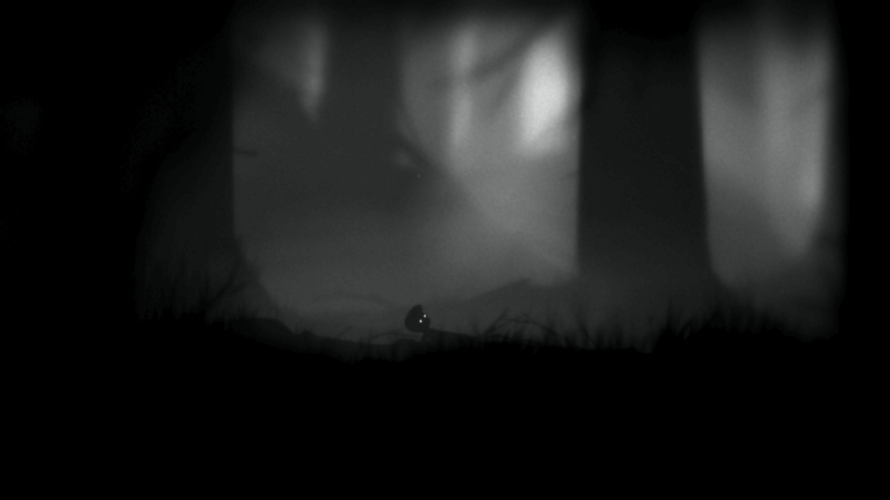 Waking up in an unfamiliar locale can be quite a daunting experience. Even more so if, as is the case for LIMBO‘s protagonist, it happens in the middle of a dark and gloomy forest. At least the kid actually woke up and got to moving forward though, perhaps in hopes of figuring out what had transpired and where he was – so there’s that. Unfortunately for him however, the road ahead turned out to be anything but hospitable, deadly hazards lurking around every corner, the entire world seemingly determined to end this exploratory journey, almost before it had even begun. Oh boy.

That said, while it was certainly dangerous, creepy, violent, gruesome – and many other unnerving things – it was also, well, fun. Now don’t get me wrong, I am not saying that guiding the nameless kid through this vast, desolate, void-of-color area was enjoyable; not in terms of what he had to go through, at least. I did kinda get him killed more than a couple of times, and yet, for some reason, he wanted to keep going upon reappearing… a few minutes ago.

Confused? I’ll try to explain, then: after each death, it was almost as if we had traveled ever so slightly back in time. Yeah. Doesn’t make sense to me either. Also, whether the lethal incident was caused by spinning saw-blades, staying underwater for too long, or having every bone in his body broken… somehow, he kept pushing forward. How I’ll never know, but I don’t really care all that much either, as I was much too busy wondering what lied ahead, and of course, if there was any hope for the kid. 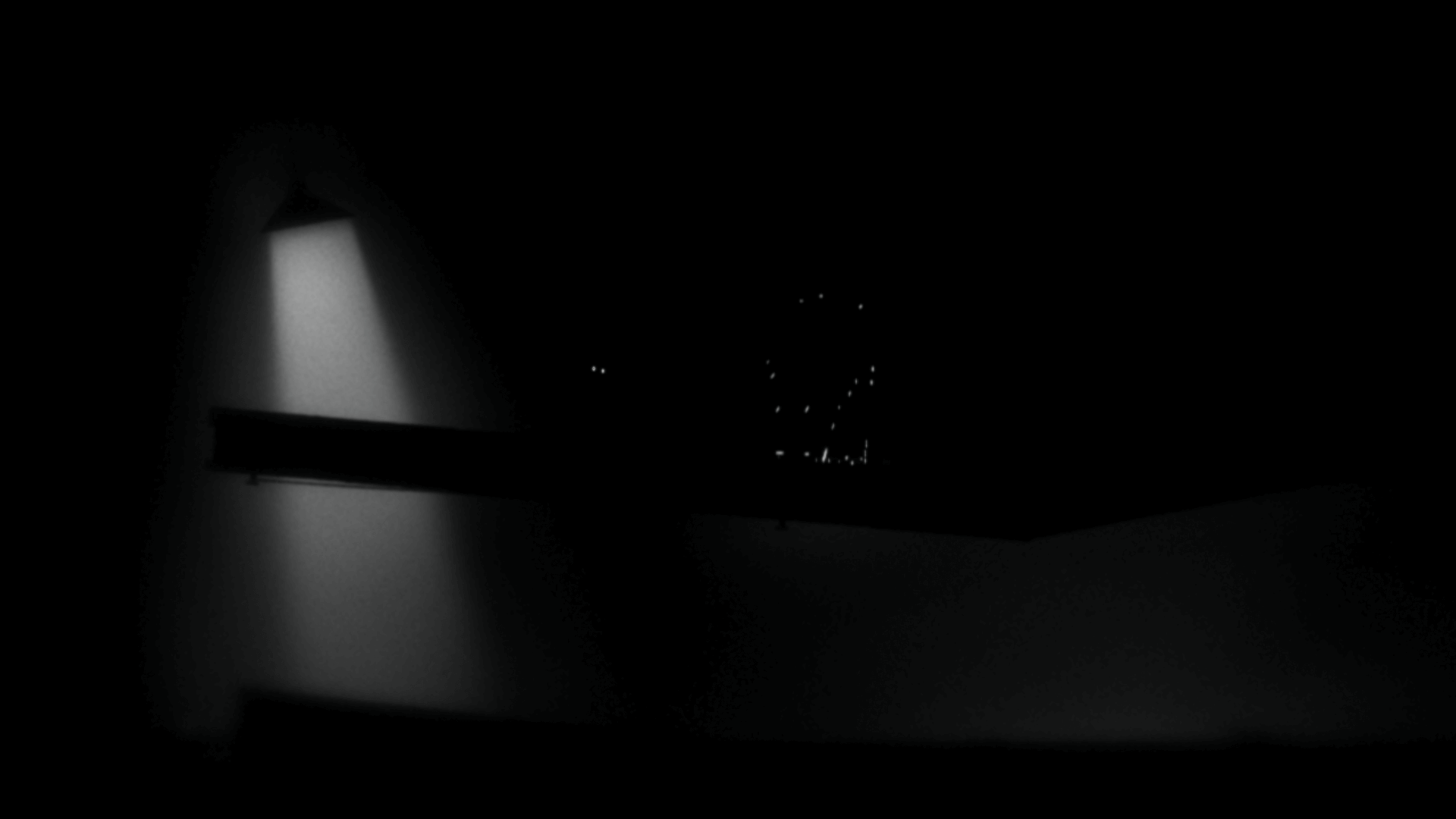 The name of the game is after all LIMBO, which in and of itself doesn’t exactly bring about warm sensations or reason for optimism. Yet the latter was exactly what started building inside of me, as one obstacle after another was overcome. Obstacles which included… well, I did mention how certain ‘deadly’ mistakes were made, right? Yeah. Might as well admit that there were times when those were pretty much entirely my fault, during moments where I simply wanted to see what was possible, venturing beyond potential boundaries and into the unknown.

While this wasn’t always a good idea, it did allow me to see things that would otherwise have been missed – and, as I mentioned earlier, the ‘penalty’ for dying was anything but severe. I’m sure that angry words would have been tossed at me, were the kid able to actually speak, but alas, our time together was spent entirely in silence; apart from the crunching of broken bones and other incidents, that is. Incidentally, this also meant I was left entirely on my own in terms of figuring out what to do next: pull this box, try to jump from that rope, go sailing, or something else entirely, involving an absolutely massive spider? All of the above, much to my dismay.

I mean, does anyone actually enjoy pulling/pushing boxes around to progress in a video game? Yeah, me neither. So it’s fortunate that these particular scenarios were both few, far between, and not overly complicated. There were those which involved a few timed movements, and I did get the kid squashed under a falling box more than once (oops!). But for the most part, obstacles were almost… dare I say… interesting? Some were downright nasty, though, requiring the use of bear traps, among other things, to survive. 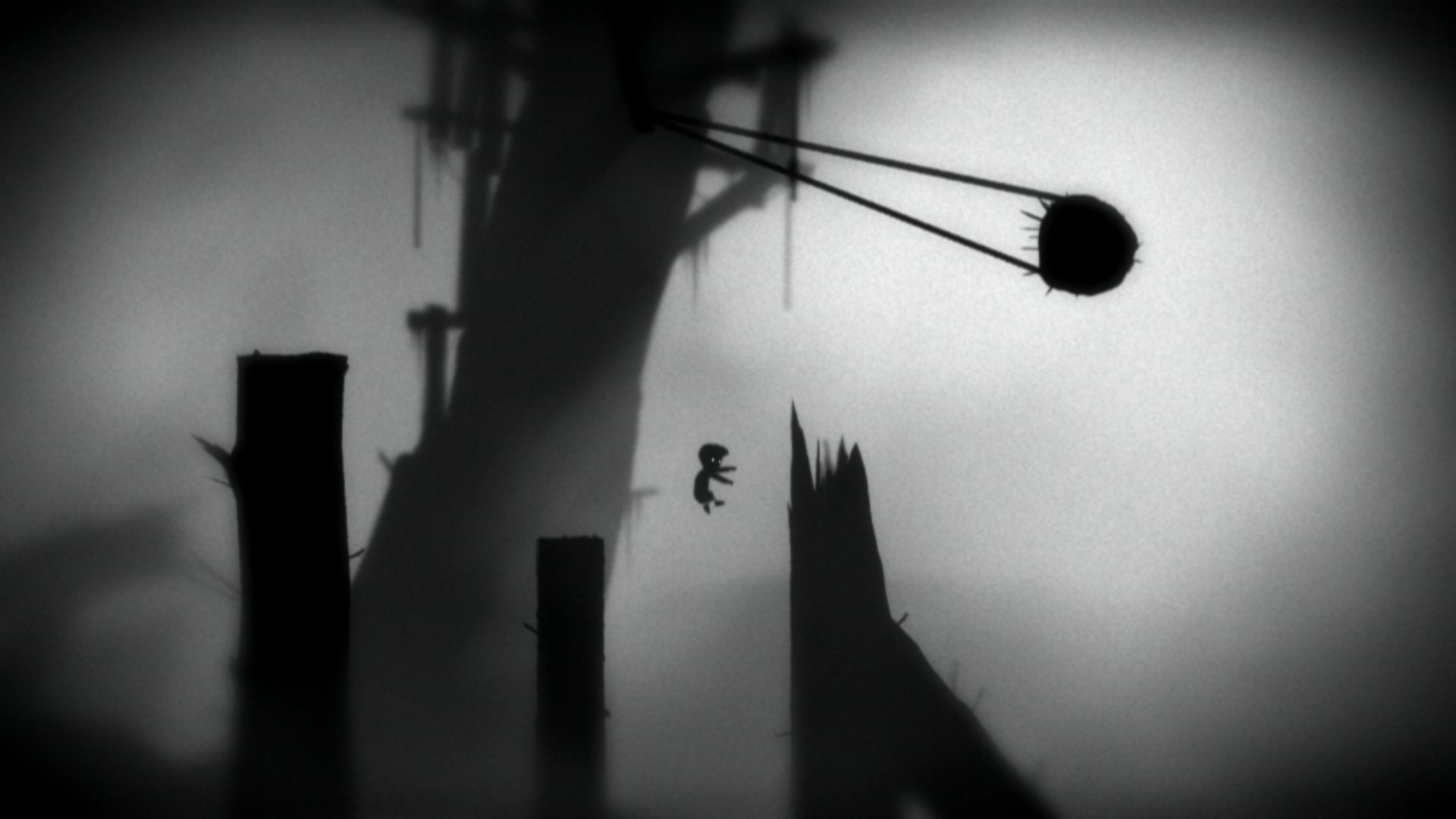 Yes, survive. See, in LIMBO, you either eat or get eaten, destroy or be destroyed, and so on. There’s no room for nice guys here, much as some would likely have enjoyed experiencing it as a genuine pacifist, never hurting anyone. Including the kid (I suppose), but let me tell ya right now: can’t be done. I found that out the hard – and time-consuming – way, after which I simply tapped into my dark side for the rest of the journey. Whether or not this also involved intentionally getting the kid crushed by a large boulder is between me, him, and the game.

In spite of that, which may or may not have happened, we got along just fine though, keeping a steady pace through and through. Well, save for times when faced with a spiked pit too wide, water too deep, or perhaps a personal favorite of mine: traps initially meant to halt any progress, transformed into metaphorical stepping stones. Whether those with the bad luck of falling into these ever thought of that upon building them, or if they were even the ones behind those constructions, is unknown. But just like figuring out how the kid was able to cheat death time and time again, the origin of said traps mattered little to me. I was determined to help the kid keep moving, and if it involved killing a bunch of who-knows-what, then so be it.

It may sound a bit cold-hearted, but in my shoes, you would likely do the same. Sure, you might be hesitant about such actions at first, although sooner or later, the dark and wicked world of LIMBO will make you realize that you’ll have to be just that. Besides, while it can be easy to lose yourself in such an atmospheric experience, keep in mind that it is still a video game and that your actions – whatever they may be – affect only virtual characters. Which is my justification for sometimes throwing caution to the wind, regarding the well-being of the kid. 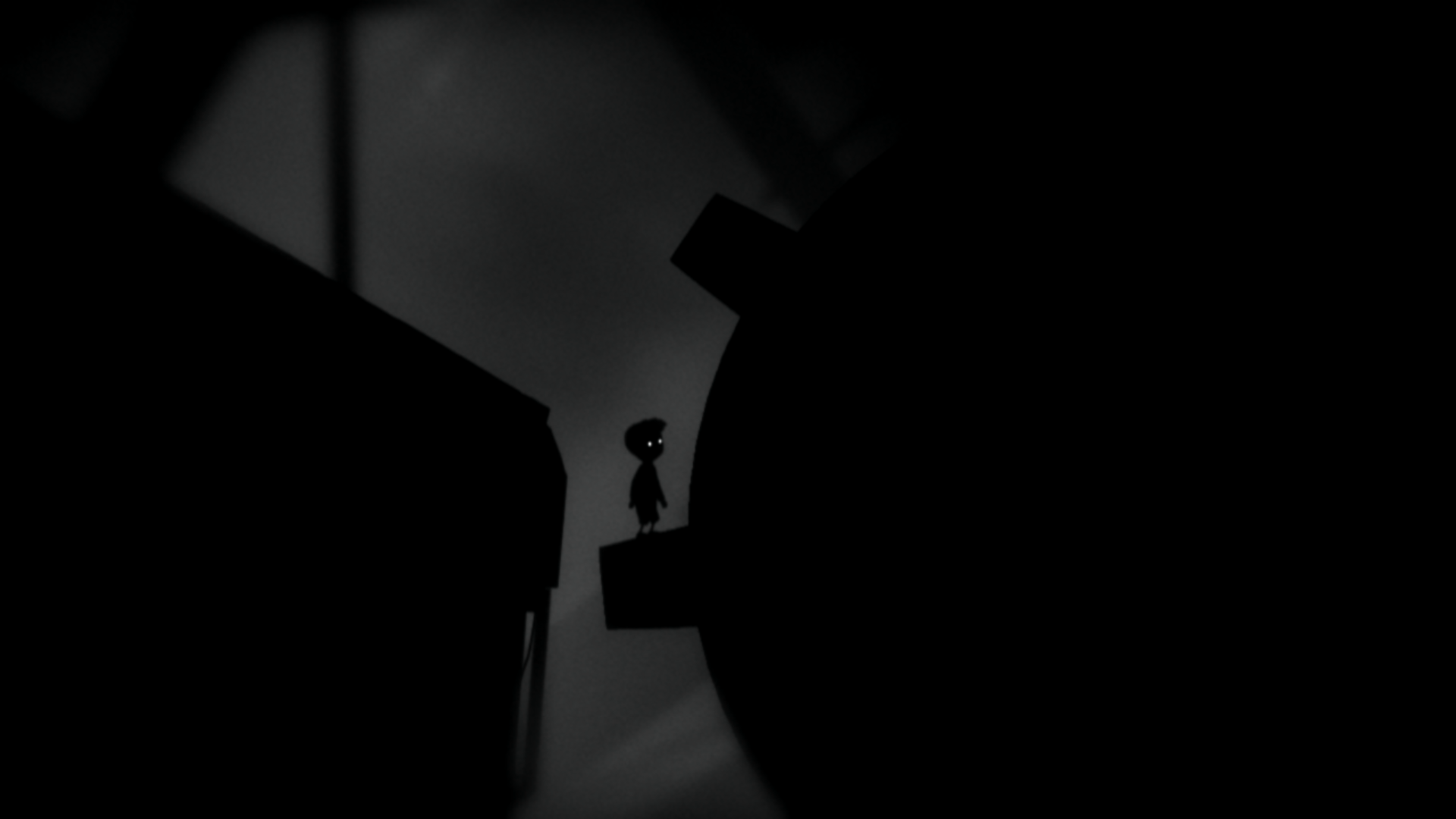 Although for all our trials and tribulations, box pushing, lever pulling, minecart riding, electricity manipulation… wait, did I mention the giant spider? Oh right. Okay then. Anyway, eventually, our efforts were rewarded with a change of scenery – to one featuring barely functional power lines and all kinds of crazy machinery. Giant cogs were also on the menu here, believe it or not, and even those aforementioned spinning saw-blades, because why should the kid have an easy time after escaping the dreadful forest? Why indeed.

At this point, I was starting to wonder, little by little, if we’d ever actually reach the end of our journey – whatever it may be. Not so much because I wasn’t enjoying the experience, but… I mean, kid had been through so much already, including who knows how many deaths and rebirths; if anyone was overdue for some R&R, it was this guy! No such luck, though, as we found ourselves operating heavy machinery, performing the strangest actions in order to, well, build the path ahead, more or less. At one point I could have sworn gravity itself had taken a vacation, my surroundings spinning, walls becoming ceilings and such…nonsense. What a ride!

Oh, and speaking of: minecarts, while useful, are unruly beasts in LIMBO. Beasts which I had to tame almost one time too many, jumping off at just the right moment to avoid getting fried. This place is definitely not up to code, and someone should get fired for such lousy maintenance work. But as always, me and the kid, we worked with what we had; which – let’s face it – was really just each other. Me pulling the strings, him doing his best to act accordingly, both of us praying for success. 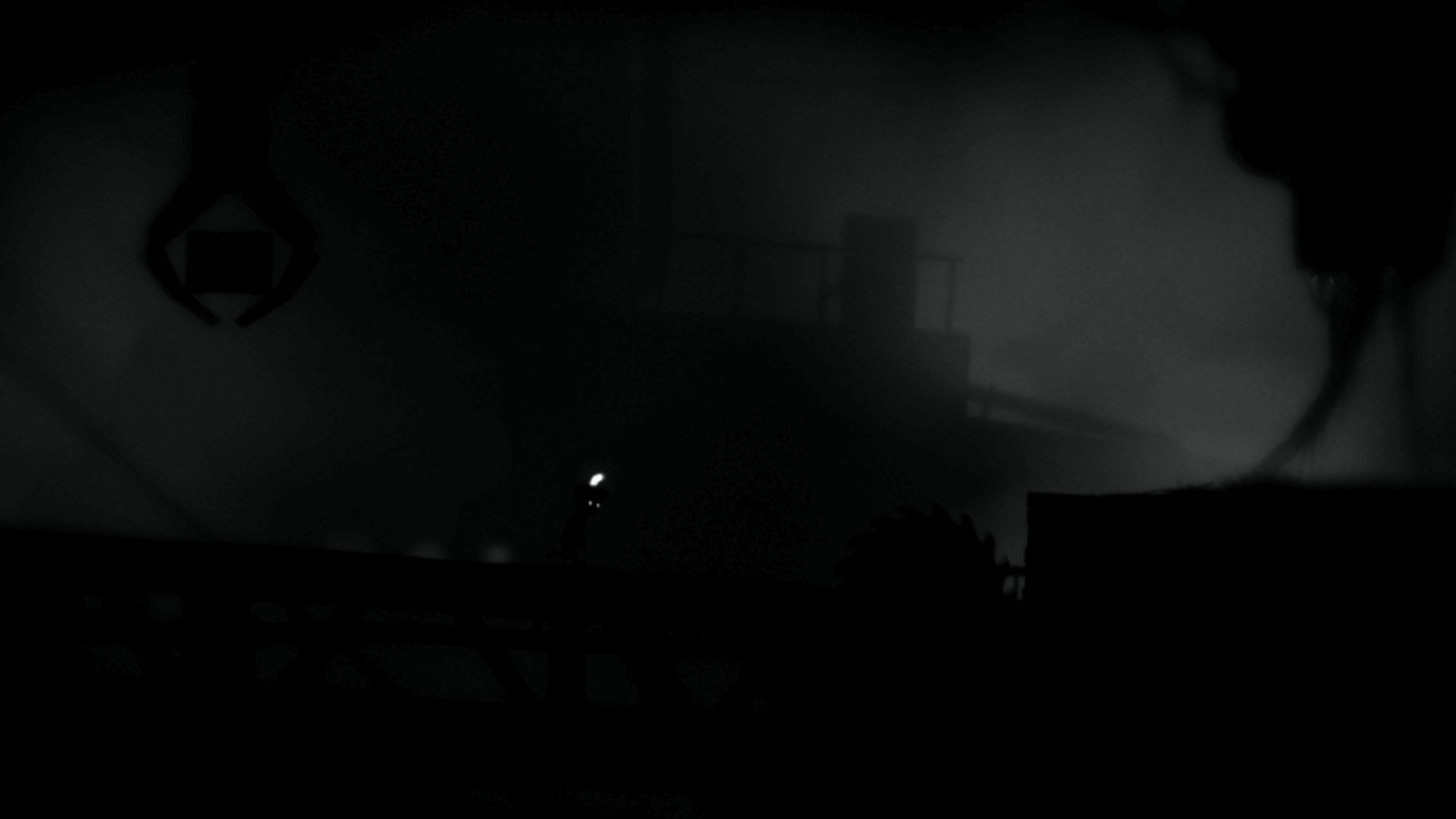 On a related note, there were moments when it seemed we didn’t have a prayer, moments when progress looked downright impossible. The worst of these, by far, involved maggots, of all things! What made these particularly annoying is that they’d latch onto the kid, forcing either left or right movement, unable to turn around – until either sunlight is reached or death occurs. No way to simply avoid them either, making for genuinely troubling times. Fortunately, the method for actually getting rid of them simply meant getting within range of… well, let’s call them maggot-eating creatures, as they were always on the lookout for a snack. Nom nom nom.

Whether I would have taken on the task of helping the kid, knowing what I do now that it’s all over, is uncertain. Probably would though, curiosity being what it is. Besides, frustrating moments (maggots!) aside, if I’m perfectly honest, it was a journey I doubt either of us will ever forget. Kid’s probably gonna need therapy after dying and being reborn so many times, though. Me, on the other hand – well, I was almost sad to see it end when it did.

Not just because of how it all ended either (which I shall not spoil here, in spite of the game being seven years old), but… because it meant our time together was over. No more saw-blades to leap across, minecarts to race at breakneck speeds or cogs to turn. The destination had been reached, my ‘puppeteer’ job was done, and that was that.

Facebook Twitter LinkedIn Pinterest Tumblr WhatsApp Telegram E-mail
Previous article Sixth and Final Chapter For Handcrafted Adventure, 'The Dream Machine', Is Almost Here
Next article Looks Like 'Röki' Will be a Spine-Chilling Adventure... In More Ways Than One