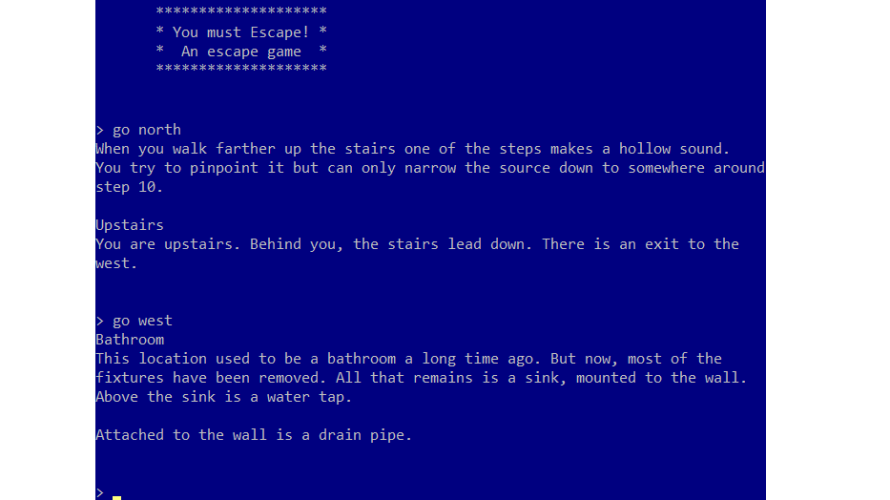 Even though it’s still freezing here, spring has arrived in other parts of the world, and with it, the 2019 edition of Spring Thing Festival of Interactive Fiction (there’s a mouthful for ya) – a celebration of interactive fiction. Text adventures, as depicted above, from this entry, is just one of many forms these can take. There are also those in which players simply click through a series of choices rather than, you know, input commands. Good stuff.

That said, the time for new entries is long over, and now it’s time to play the no less than twenty submissions. Once that’s done with, why not nominate one or more, either for a Best In Show ribbon, or the ‘custom’ (as in, ‘make up your own ribbon and give them to games’) Audience Awards? Just be sure to play at least two prior to making your picks and get your nominations in before 11:59 PM EST on May 6th, 2019.

Much as I do absolutely love Twine, it is quite pleasing to see at least one entry use Ink and Ren’Py this year. Ah, how I wish more would use those for interactive fiction, the latter mostly utilized for the creation of visual novels and the former… well, it’s a seriously underappreciated language for writing interactive fiction, really.

Note: While all are eligible for Audience Awards, those not listed in Best In Show are not eligible for such a ribbon. Confusing, sure, but I don’t make the rules, I just reiterate them as clearly as humanly possible.

(Thanks to Emily Short’s Interactive Storytelling for the heads up.)