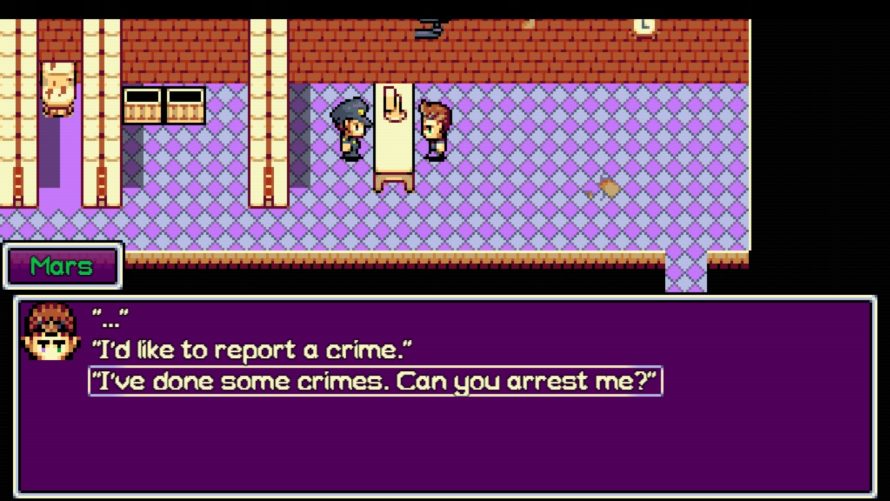 It all started with the end. The end of the world that is, everything quite literally exploding around me, nothing left but to… sign on for the Mars Underground software experiment, as it were. An uncanny contract if I ever saw one. If only I had known how this would mark the beginning of the strangest day of my life. Repeatedly.

Overly dramatic intro? Perhaps, although that is how it feels, looking back on my time with Mars Underground, a game in which the same day begins anew the moment Mars, its protagonist, falls asleep. While this particular phenomenon is not something I’d ever want to experience in the real world, time loops can be quite enjoyable in movies, books, and as is the case here, video games. They do have a tendency to also be rather confusing, however, quickly turning into a massive, overly complex puzzle.

I mean, this next bit probably goes without saying, but: at some point, the loop has to be broken, as otherwise there’ll be no end to the experience properly. No credits to roll. No way for players to know when the story is over, no finale of any sort. Well, much like Groundhog Day and similar tales, this too will end. If Mars plays his cards right that is. Otherwise… well, the player controlling this ill-fated character will become very familiar with the game’s various locales, seeing them again and again and… again. Yeah. 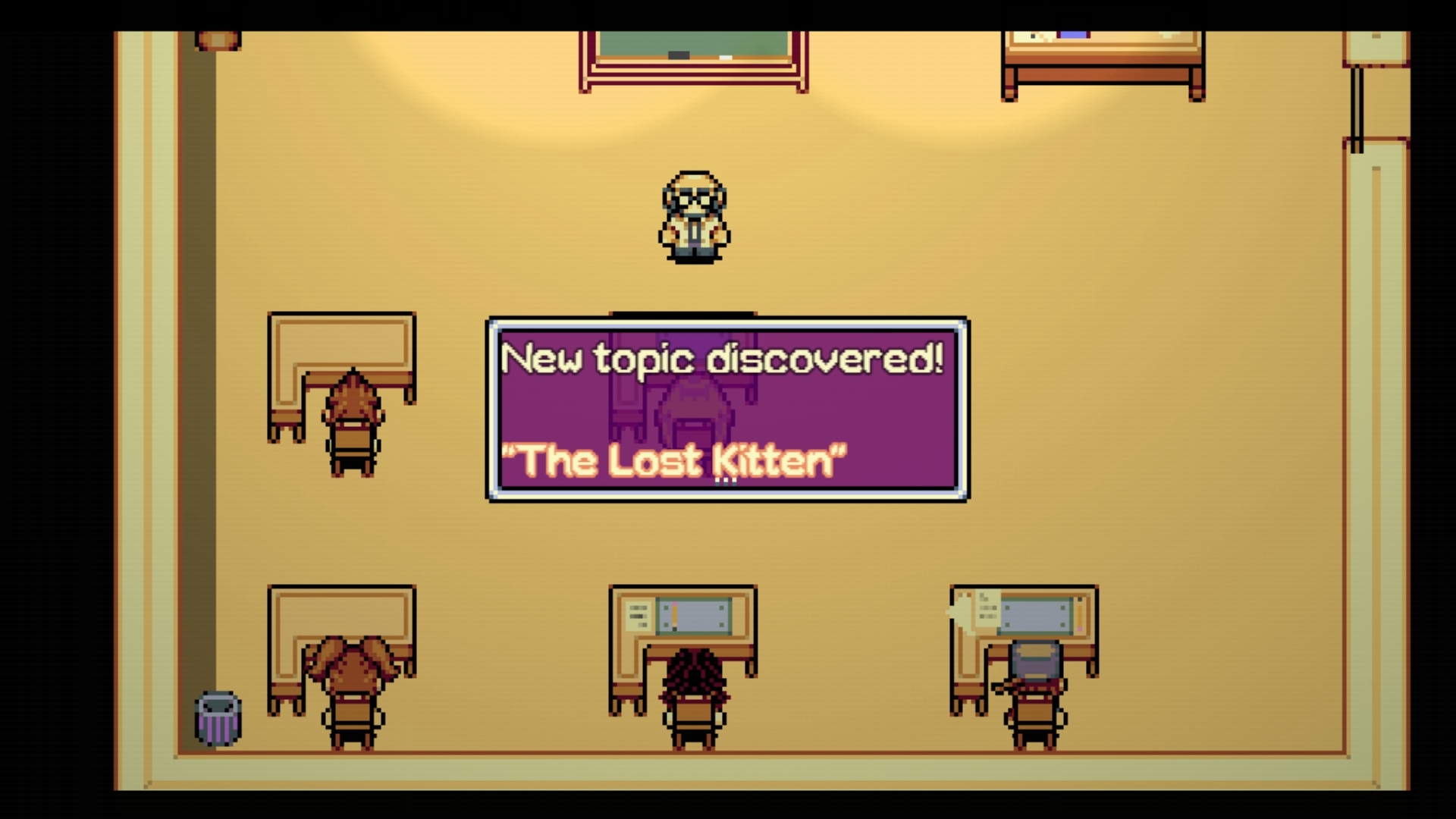 Much like in other time loop-centric stories, progression in Mars Underground comes from knowledge: certain events/conversations will trigger the discovery of a new topic. These open up new dialogue options which can often lead to yet more new topics. Rinse and repeat. Kinda. There are a lot more variables to manage than one might initially think. As such, it’s not just simply a matter of flooding every NPC with words to move things along.

You’ll have to keep track of everyone’s schedule and exactly who they are, in order to change the course of events to close the loop. Or so it would seem. Without spoiling too much, I will say this: getting Mars killed in this game is quite possible, if not downright… necessary. You’ll see what I mean not long after stepping into his shoes. Shoes that I suspect he never cleaned or changed once, much like his clothes, during the 50+ cycles it took for me to wrap up this little twisted tale. Ew.

Anyway, early on, there’s not a whole lot to see and do in Mars Underground, but stick with it, for little by little, the entire town will change. Sometimes for the better, sometimes for the worse. It all depends on what you, as Mars, decide to do… is what I want to say. But while you do have a rather large amount of freedom to roam, the story itself is (almost) perfectly linear. Save for the order in which you go about triggering the events that will eventually lead to the grand finale. But before reaching said finale, I did spend a good five hours as Mars, a kid with the unfortunate problem of being stuck in a time loop, so let’s take it from the top, shall we? 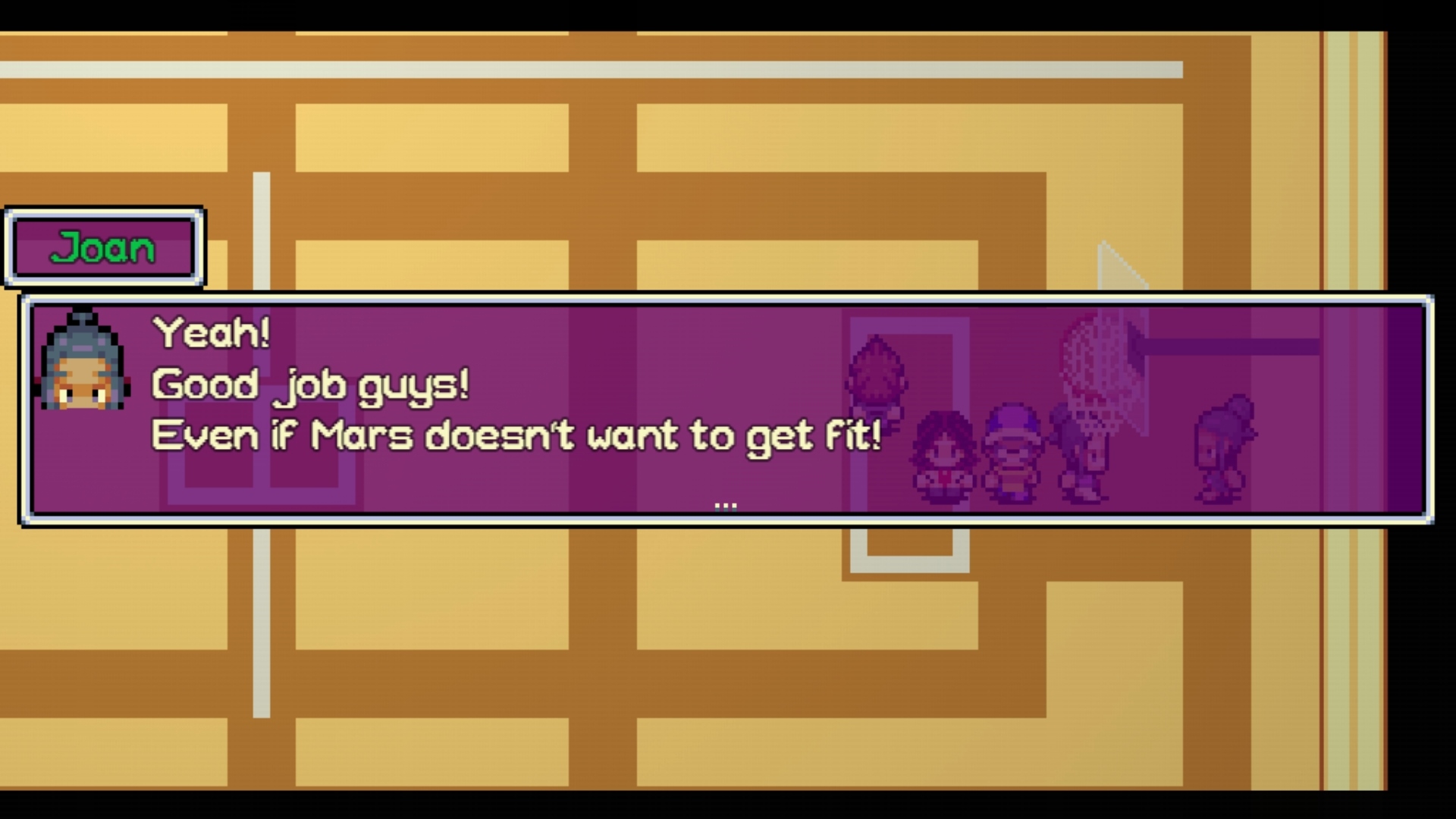 If I was Mars’ age and one day woke up to find myself at the beginning of yesterday time and time again, I’d likely care more about having fun than anything else, knowing none of my actions would leave a permanent mark on the world. Needless to say, however, that would likely get quite boring after a while, at which point my plan would change to figuring out how to fix whatever had triggered this uncanny setup in the first place. Much like I did in the game, upon realizing something was very wrong with, well, everything.

Each day – or cycle, rather – is divided into ten different ‘periods’, providing a sense of urgency to the overall experience, however small. See, even though NPCs do move freely about, according to their schedule, time itself only changes when Mars transitions between areas. So if you’ve successfully reached your destination and no one is moving about, no need to rush – take your time and talk to everyone. Do keep an eye on your wallet and inventory, however, for both play an absolutely vital role in the grand scheme of things.

While there’s no need to make Mars’ wallet overflow with dollar bills, much like how specific items are needed to solve certain puzzles, a fair amount of money will be required for that very purpose as well. Fortunately, the game does away with classic point ‘n click adventure nonsense, like combining items and using every last thing in your backpack on all objects in the world, creating a far more streamlined experience. A better one too, I’d say, or if nothing else. 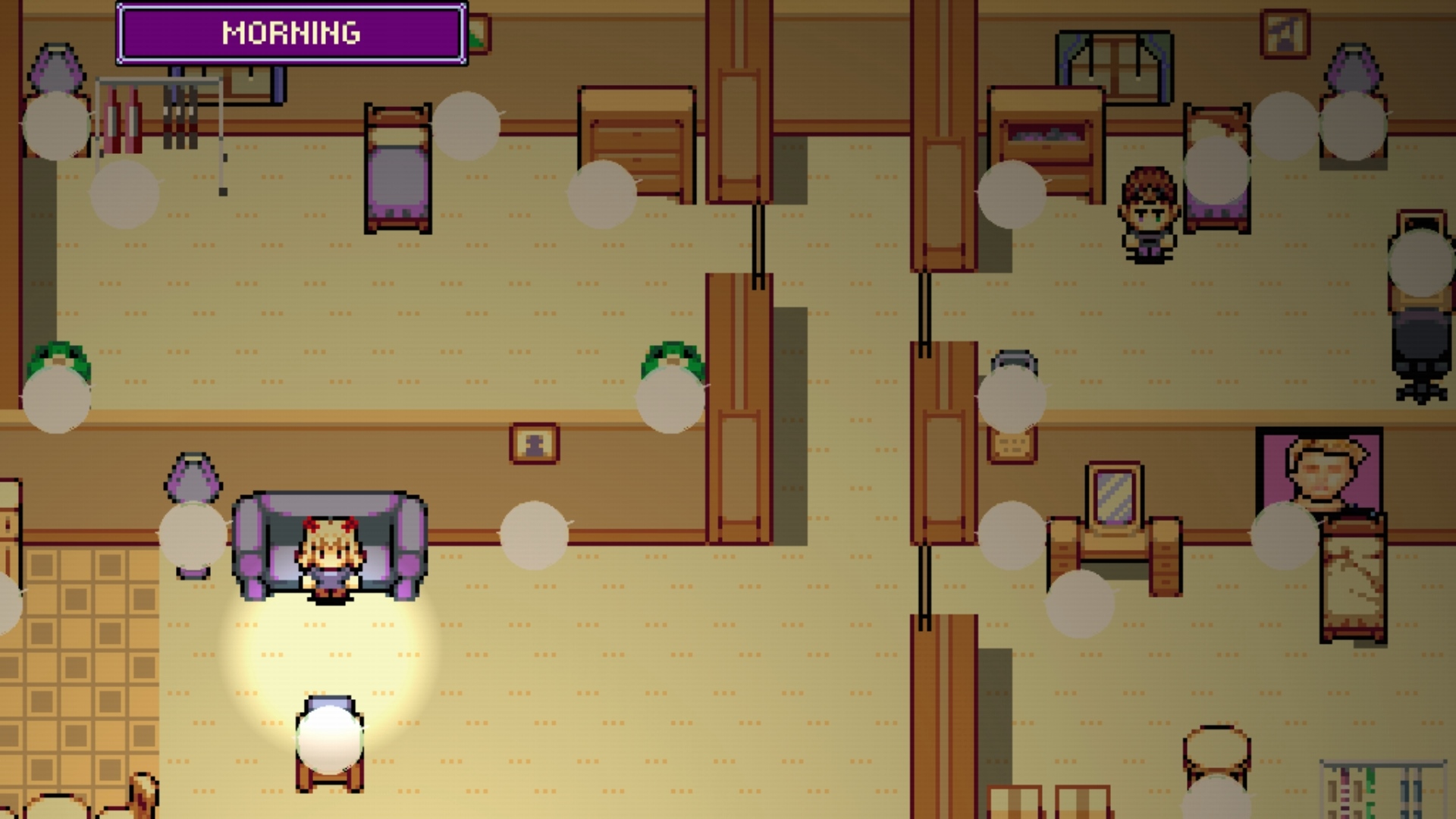 On top of that, holding down a button actually highlights interactable hotspots in the current area, completely eliminating the need for pixel hunting (yay!). This, coupled with the fact that the game automatically selects items that can be used upon interacting with specific worldly objects makes for a smooth and virtually stressfree experience, allowing players to focus on the story, archaic design choices left in the past – where they belong.

Not that Mars Underground is entirely void of troublesome moments, however, as there were times when I felt quite lost in terms of how to progress. Until the game’s built-in hint system suddenly appeared that is, asking me if I wanted some help (RIP fourth wall). If you’re as bad as me at keeping multiple balls in the air when it comes to video games, don’t make the same mistake I did and tell the hint system to piss off. Because it will, and far as I can tell, there’s no way to bring it back. Let it to provide a hint, on the other hand, and you’ll immediately be much closer to figuring out the next step. A welcome feature, to say the least. 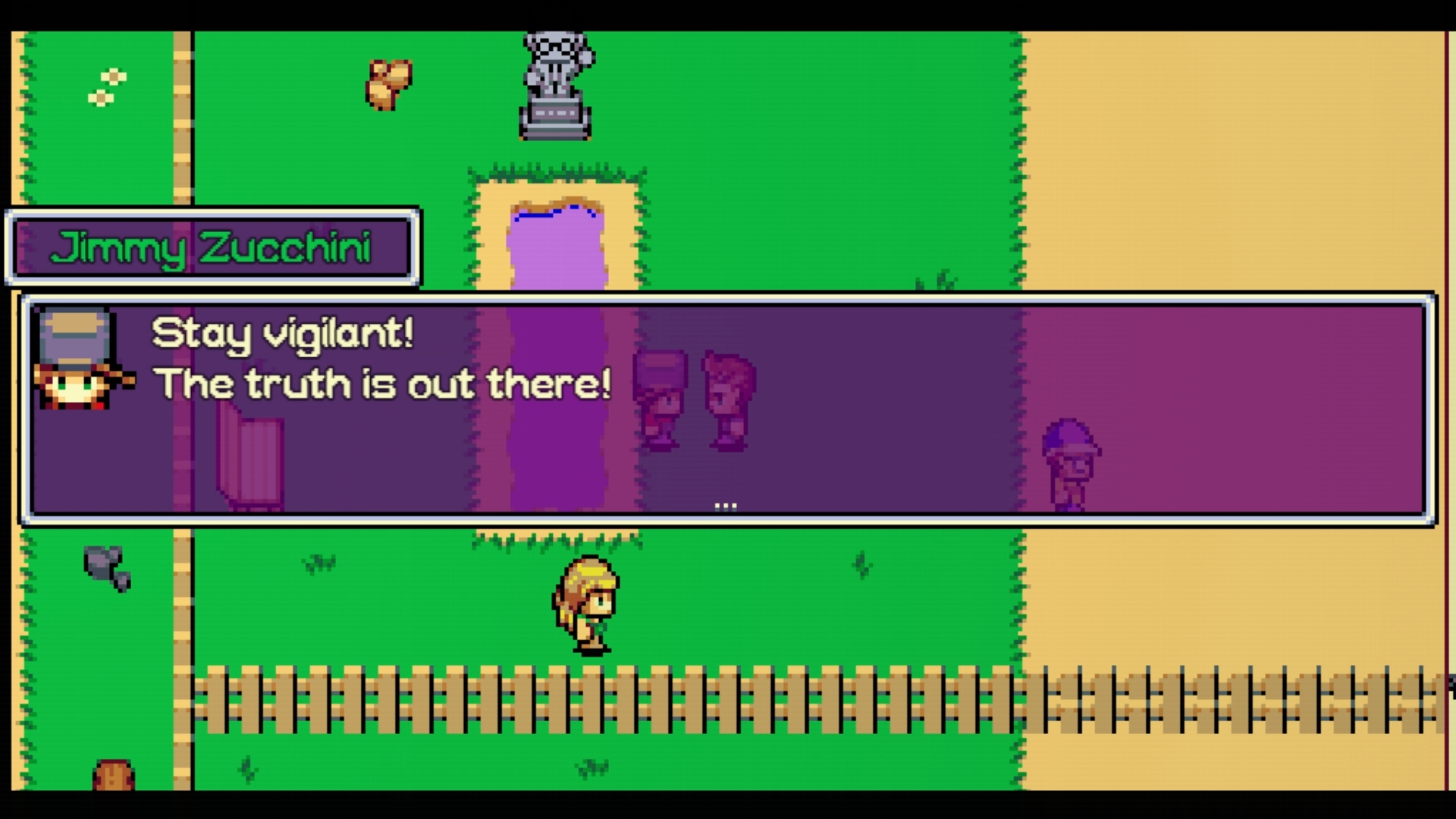 Speaking of puzzles: as mentioned earlier, striking up a chat with as many people as possible is really the main thing here, so it’s fortunate that the dialogue is both well-written and, for the most part, appropriately unsettling. See, while there are time loop stories in which the overall mood and atmosphere is quite lighthearted… this is not one such. Mars Underground has its fair share of conspiracy nuts, crazy scientists, grumpy old men and even talking toilets. Such a weird place.

It’s not all about simply moving the story along either, as there will be times when Mars can perform certain shenanigans for no other reason than ‘because it’s possible’. I found myself enjoying these brief excursions quite a bit, although eventually, curiosity did get the better of me, plot progression taking priority once more. That said, without these little alternate paths – some of which lead absolutely nowhere – Phobos City would feel ever so slightly less alive. If a town in which everything resets at midnight is even alive in the first place.

But while your actions in each cycle leave no lasting mark on the world, your inventory and wallet stick with you – much like information acquired, no matter the means or source (remember, talking toilets). Because of this, little by little, most players should have a relatively easy time putting the pieces together, eventually reaching the… end. The end of it all, at which point everything will be over. No more Mars Underground. Nevermore! Ahem. Time to wrap up this review before I end up as crazy as certain characters in the game. 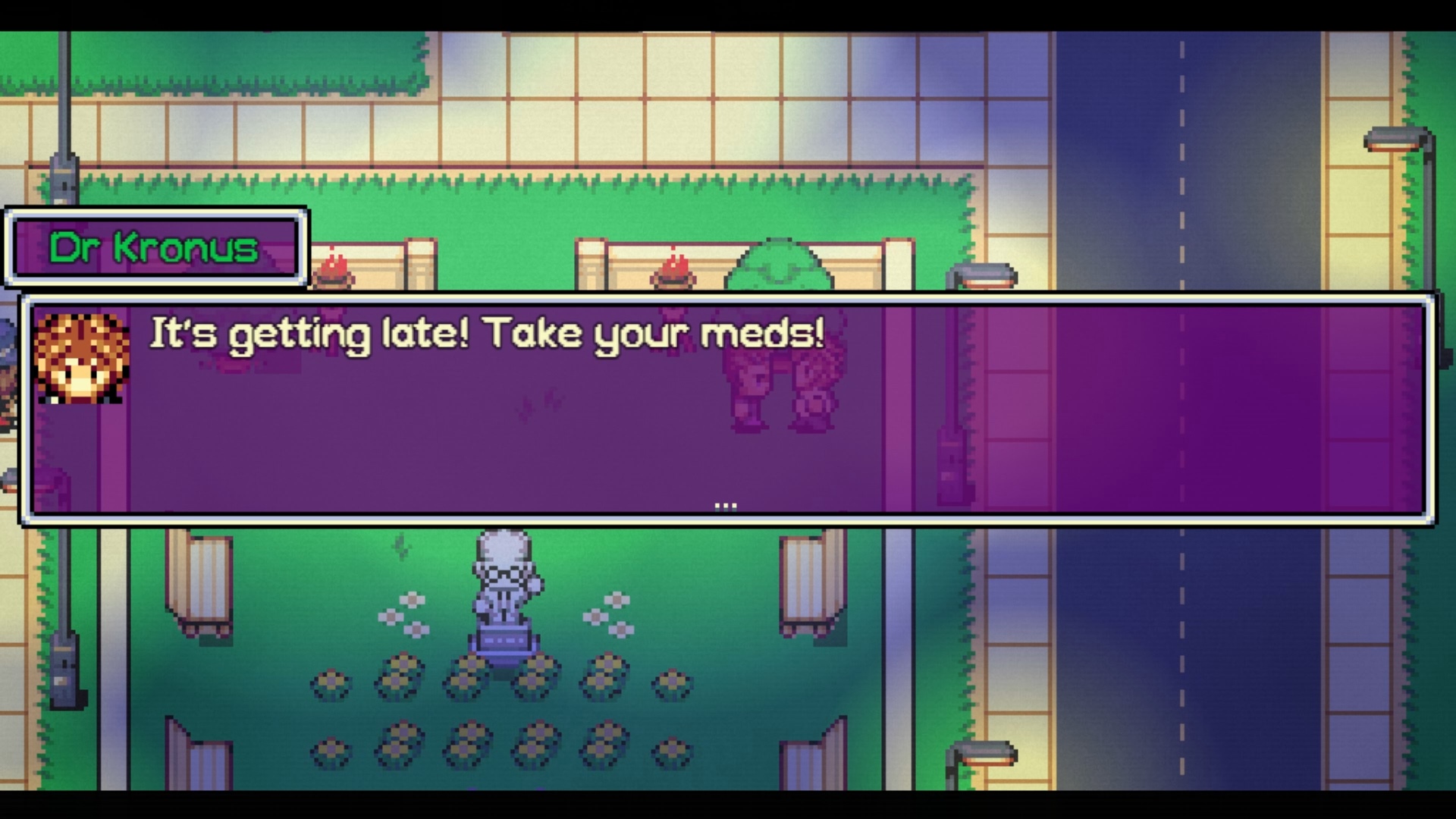 Those in the mood for an engaging experience with a twisted story full of “aha!” moments, complete with accessible gameplay, quirky characters, and a rather pleasing art style… should probably look elsewhere. Just kidding. Mars Underground has all of the above and more, even if it can get a tad repetitive – but such is the case with most tales of loopy times, really. In spite of that, I had fun from start to finish, making this one an easy recommendation (much like the game, thanks to the aforementioned hint system). Say hi to the toilets for me, will ya?

Mars Underground (and its demo) is available on Steam, Game Jolt, and itch.io, with a $9.99 price tag.