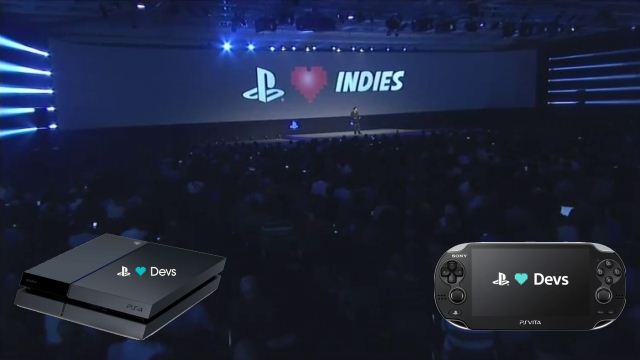 Sony recently unveiled a lengthy list of indie games, both ports, and exclusives, en route to one or more of their consoles. They labeled it the ‘Gamescom Indie Avalanche’, and with heavy hitters like Hotline Miami 2, N++, Gunslugs and Starbound, I’d say that’s pretty accurate. Never thought I’d be this excited about an avalanche though!

I’m not entirely sure where Microsoft stands on the whole indie/self-publishing situation right now, what with the constant changes. In contrast, both Sony and Nintendo are doing great with their respective consoles, and this latest tidbit is only going to further improve Sony’s odds, once the next generation truly begins. I mean, have you seen the list of upcoming indie games on their consoles? It’s… quite a sight.

Remember, at PlayStation, we allow the smallest indies to self-publish on the PS Store alongside the biggest publishers, we’re democratic like that.

Wow. Wonder if ‘they’ got the message? Probably not. Anyway, among those set to make their console debut on one of Sony’s, we find Everybody’s Gone To The Rapture, The Binding of Isaac: Rebirth and Wasteland Kings. There are quite a few more though, and I dare say that every last one has me intrigued! Newly announced ones linked below, and the full list of games heading to PS4 and Vita can be found on the PlayStation Blog, indie and otherwise.

Some of these are already available on other platforms too, and Hotline Miami 2, N++, as well as The Binding of Isaac: Rebirth, will all be available on PC at some point. Great for those who, like me, probably won’t be able to afford a PS4 at launch; or, if you simply prefer playing games on a computer instead of a console. People still do that, after all.