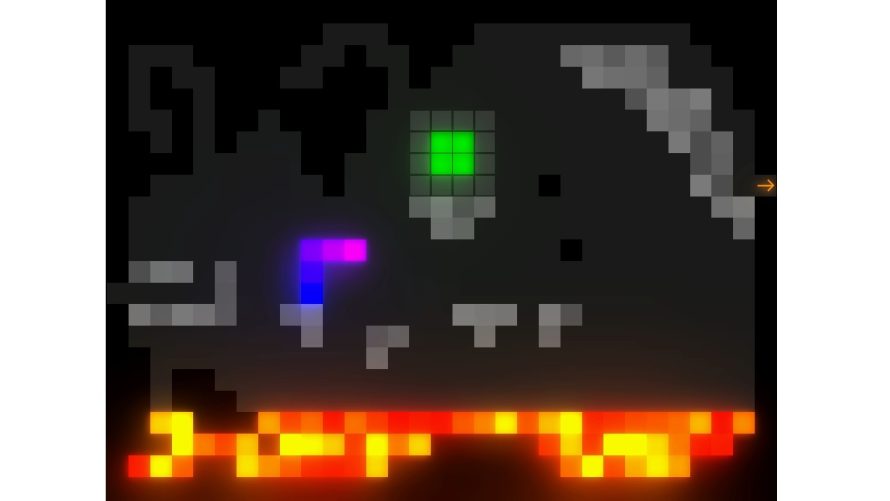 Ain’t often we see a hybrid like this: the classic mobile game, Snake, with platforming elements, puzzle-y level design and… hazards. Alas, during Ludum Dare 29, one such came to be, under the name Snakeformer. But that was then, this is now, and seven months later, a much improved post-jam version has seen the light of day. Groovy.

I know what you’re thinking: “look at those pixels! THOSE PIXELS!” – not gonna lie, those were slightly off-putting to me as well; although only at first. Once ya look past the blocky art style, you’ll find a bunch of treacherous mazelike areas, each of which features a surprising amount of brain-teasing fun. Dangerous ‘death comes at a moment’s notice’ fun, but fun nonetheless. Just remember, lava bad, green dots good, as the latter extends your snake, letting you travel further and cross wider gaps. Do watch out for falling blocks though. Trust me.

It’s a simple concept that’s easy to grasp, yet at the same time, one that makes for some rather tricky level design (as shown above). Reaching the exit – which is always placed conveniently to the right – quickly becomes a matter of planning ahead, making every move count, or… making friends with the restart key. See, chances are you’ll often find yourself stuck, unable to move any further, as without a way to twist and turn your head upwards, or to either side, it’s the end of the road. But careful planning, combined with a bit of trial and error, should do the trick.

Or maybe it won’t? Find out for yourself, in Snakeformer (Ludum Dare 29 original)!