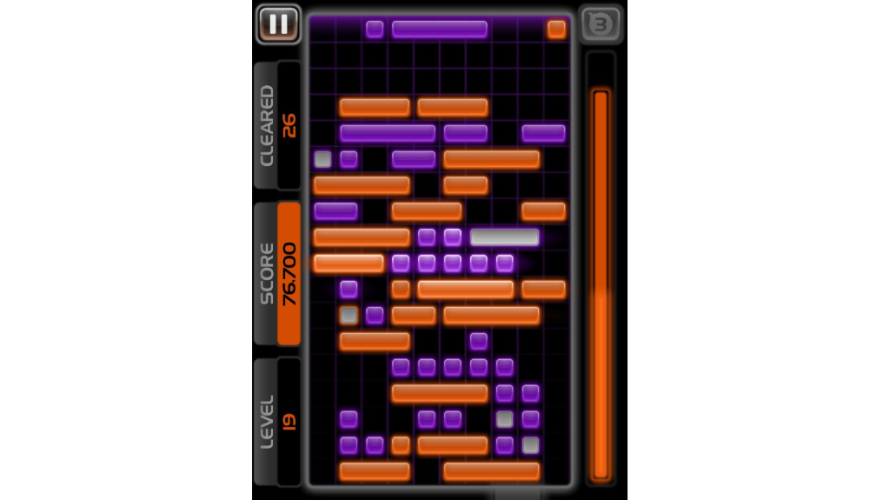 At first glance the two may look similar, but Slydris has little to do with Tetris. For starters, it doesn’t use tetronomes and the pace is noticeably slower. It’s still a ton of fun though, with several different modes, a sense of progression and… some annoying special blocks!


Blocks of various sizes will drop, lines will be cleared, bombs will explode, and your ability to think ahead will be put to the test in Slydris. Unlike its more fast-paced brethren however, you won’t feel like things are ever going at breakneck speeds here. Well, unless you jump into survival mode, that is – there you’ll have to think fast to avoid having the screen fill with blocks (which spells out a nasty game over).

I’d recommend starting with infinite though, as that one lets you take your sweet time, planning every move. See, infinite and zen are actually turn-based, in that blocks only drop after you’ve moved one. Grab one from the line about to come crashing down, or rearrange those already fallen – doesn’t matter. One move and your turn is over.

Zen never ends and packs a much lower difficulty, but also won’t let you unlock achievements. A trade-off that makes it perfect for practicing, which I found incredibly useful. In survival, a new cluster – not line, cluster – drops every x seconds, but you do have unlimited moves (or slydes) at your disposal; do think fast however, or you’ll run out of space fast.

While the three modes are each fun in their own way, chances are that if reorganizing and clearing lines was all you’d be doing, not much fun could be had with Slydris. As such, it’s a good thing that a multitude of special blocks appear from time to time, further increasing the challenge. Some fall but once and then just sit there, blocking traffic as it were, while other shatter whatever they land on, turning everything into 1x1 blocks. The ‘shatter effect’ can be incredibly helpful, often giving you some much-needed breathing room by way of a few quick clears.

You can also smash three lines instantly by triggering an explosion. Once the meter has been filled, that is. As far as I can tell, this is done by matching the proper colored blocks. Although unless you’re very skilled and/or lucky, this process can take a while, making it rather unreliable as a panic button. So hold onto it until the screen reads “DANGER!”, as that’s undoubtedly when you’ll need it the most; especially if your planning/luck has been off, and the screen is almost full!

So as you can probably tell, Slydris is a classic case of “easy to learn, hard to master”, although with random being random, unfortunately luck does also come into play. I’ve lost track of how many times the game dropped a magnet (‘falls once, but never again’) block near the top, often causing a game over soon after. For the most part, it seemed balanced enough, dealing me a fair hand (one full of blocks) to manage, and after getting the hang of things, I soon found myself playing infinite’s 24th level (progress!). 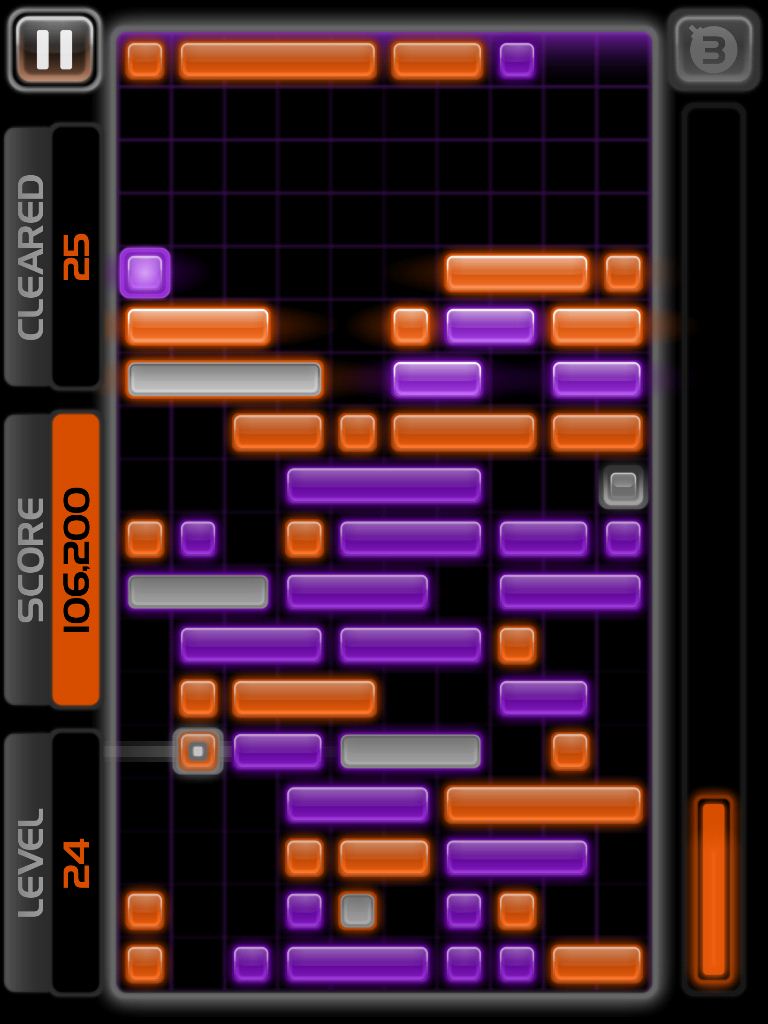 That’s quite an accomplishment, as anyone who’s made it past 15 will surely tell ya. I do still have ways to go though, as infinite and survival both consist of a whoopin’ 30 levels. But hey, 24 is progress! Even after playing for a good 6-7 hours, one thing still has me puzzled: what triggers a level increase? Managed to rule out score so far, which leaves… lines cleared? Well, not like it’s all that important anyway. Oh and once you reach the higher ones, keep in mind that they no longer all have a ‘checkpoint’. I found this to be particularly annoying, as it meant either pressing on after 15 until 19, or starting from 15 again next time… not cool. At all.

Aside from that bit, there really isn’t much wrong with Slydris. You rearrange blocks to clear lines and rack up points, keeping an eye out for special ones, dropping bombs as necessary and I must say, it’s actually rather addictive. If it all sounds a bit overwhelming, don’t worry as each new feature will be detailed before the game throws them into the mix. Remember, easy to learn, hard to master; I’d say just about anyone can pick up and play this little block puzzler. They likely won’t do too well initially, but practice, perfect, and all that.

To accompany your high scoring efforts are three groovy instrumental tracks and some stylish visuals that are just the right amount of colorful. Zen for an incredibly relaxed experience, Infinite for its continuously increasing pace and Survival, once you’re ready for a serious challenge. There’s a mode for players of all skill levels here, and in case you couldn’t tell, I’d highly recommend picking this one up. Like I said, the only potential issue is that the randomness can mess up a good run, although this was a rare occurrence.

I played the iOS version (universal) for this review, but Slydris is also available for Android (Google Play, Amazon) and Windows/Mac (Desura, Gamersgate) users. So pick yer poison, rearrange some blocks and I’ll see ya on the leaderboards.