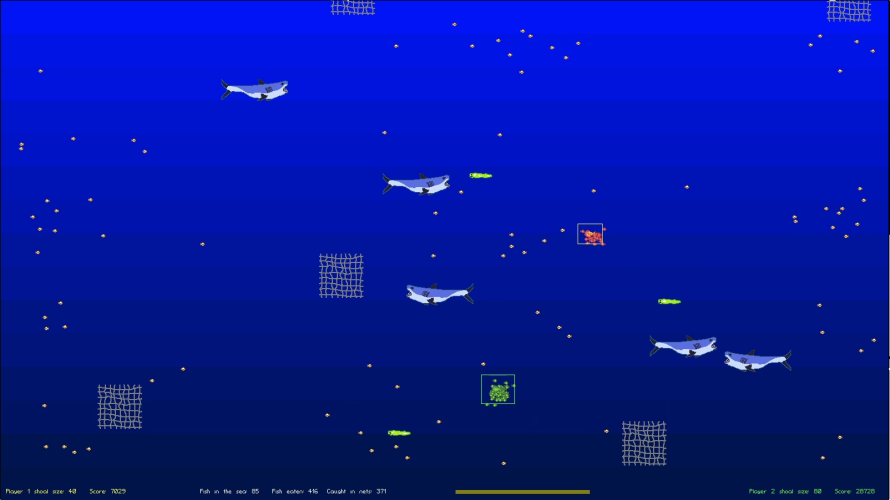 So, you know how this month’s MAGS competition opted for an Under the Sea experience, right? Well, as I’m sure you know, that’s where little fishies reside, and in Shoaly You Can’t Be Serious!, sharks and nets join the fray. Both determined to stop you from going on a feeding frenzy and setting any kind of high score. Perhaps bringing a friend along for some splishing and splashing might even the odds?

Yeah… probably not. At least that was my experience, as player two simply destroyed any hopes I had of emerging victorious after the final fish had disappeared (whether by net or either player’s nom nom I do not recall). That’s not to say it wasn’t an absolute joy to play, however – even by my lonesome (which, unsurprisingly, also did not result in anything resembling a high score), sharks, net, electric eels, and all. Oh, that last one? They stun ya temporarily. Just like in the real world, contact is not recommended.

Controlling the game, even with two people playing, is easy enough: one person gets to move with WASD while the other swims about using the arrow keys. No fancy gamepad support or powerups to manage. Just those four-directional movement keys to aid you in avoiding, well, those things I just mentioned… while gobbling up fish. So many fish. More than the person playing with you, if anyone, too. Unless you’re me. In which case, player one will likely always be second on the podium. Sad fish face.

Shoaly You Can’t Be Serious! (first of hopefully many MAGS January entries) is available on itch.io for free.

Facebook Twitter LinkedIn Pinterest Tumblr WhatsApp Telegram E-mail
Previous article Play the Games of Yesteryear in Preparation for AGS Awards 2020
Next article How About One Last Chat With the Grim Reaper at 'Death's Door'?