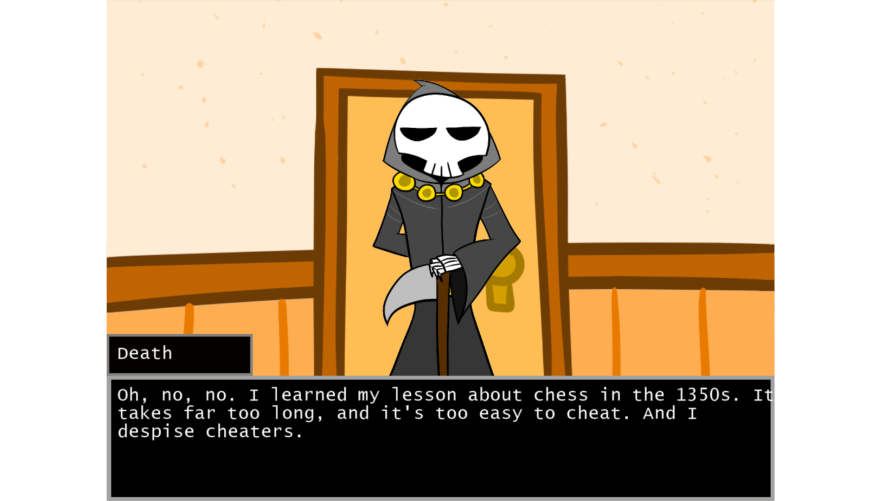 I’m not entirely certain as to when the Grim Reaper (aka. Death) first made an appearance. Well, not that it matters a whole lot in this particular scenario, anyway. What does, however, is what you decide to say when he comes knocking because even at Death’s Door, there’s still time for one last chat.

Right from the get-go, the game lets you know that something isn’t quite right across the globe. No peaceful relaxing introduction which then slowly transitions into the last conversation you, the player, will ever have. A brief news broadcast is immediately followed by a knocking on your door, and thus begins an interesting exchange of words – among other things.

Will you die? Will you live? Who knows? Come to terms with your own mortality in this little experiment.

Exactly how it plays out is entirely up to you, choices throughout deciding which of several endings Death’s Door concludes with. Oh, as depicted by the above screenshot, it’s not all doom and gloom either, even if the humor might be a little dark at times.

This combined with its coffee break length makes for an experience well worth revisiting to make different choices and find out if – wait, no. I probably shouldn’t spoil that part. Just gonna wrap this up instead, so you can get to answering the knocking on Death’s Door…

Death’s Door is available on itch.io for free.

Facebook Twitter LinkedIn Pinterest Tumblr WhatsApp Telegram E-mail
Previous article Gobble up Little Fishies With a Friend in 'Shoaly You Can't Be Serious!'
Next article Vast Empires are Built (and Automated) in 'Malmyr' One Tile at a Time