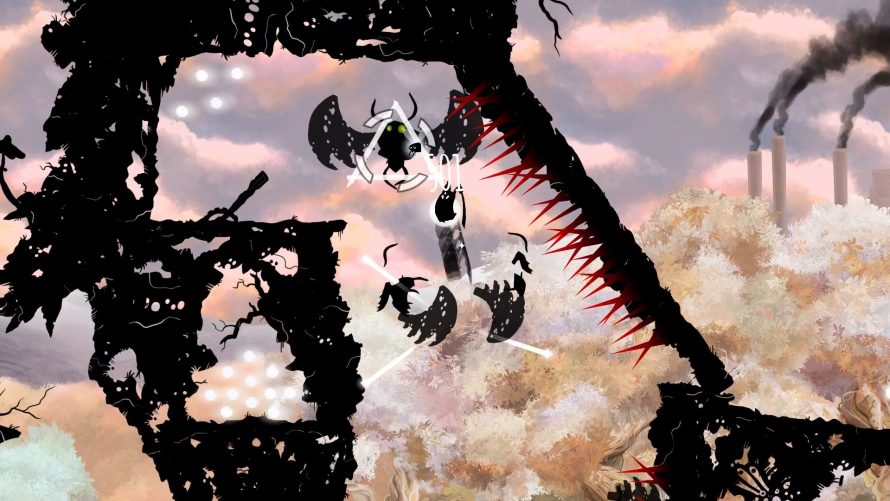 “You are the overpowered ninja hero Shadow Bug!”, they said. Were they lying? Well, yes and no. Playing the game did certainly make me feel like a ninja hero, but the ‘overpowered’ thing might be a bit of a stretch, as smashing into an enemy would result in my untimely demise. I was still determined to at least try and live up to their expectations, even if the road ahead was likely going to be bloody, overflowing with seemingly insurmountable challenges.

Try as I might, however, the task to save my home forest from an evil factory… shall remain forever incomplete. So keep that in mind when reading this review: I did not play through everything Shadow Bug had to offer, nor did I nail every challenge in each of the twenty-four levels I managed to beat. During the twenty-fifth level, I reached the point where I found myself fed up with the ever-increasingly steep difficulty and decided to call it quits. It was fun prior to that though. More or less.

But first things first. While most 2D platformers are best with a gamepad, this is one of those rare exceptions, as the precision and speed required to navigate these lands simply can not be found with the right stick. Confused? Oh right, forgot to mention that in this game, jumping is handled by attacking, and only if there’s a target within range. Doesn’t matter if it’s behind a physical object either. If it’s in range (or visible on-screen, rather), moving the curso – fly nearby and clicking causes the little bug to immediately dash to it, any and all obstacles be damned. 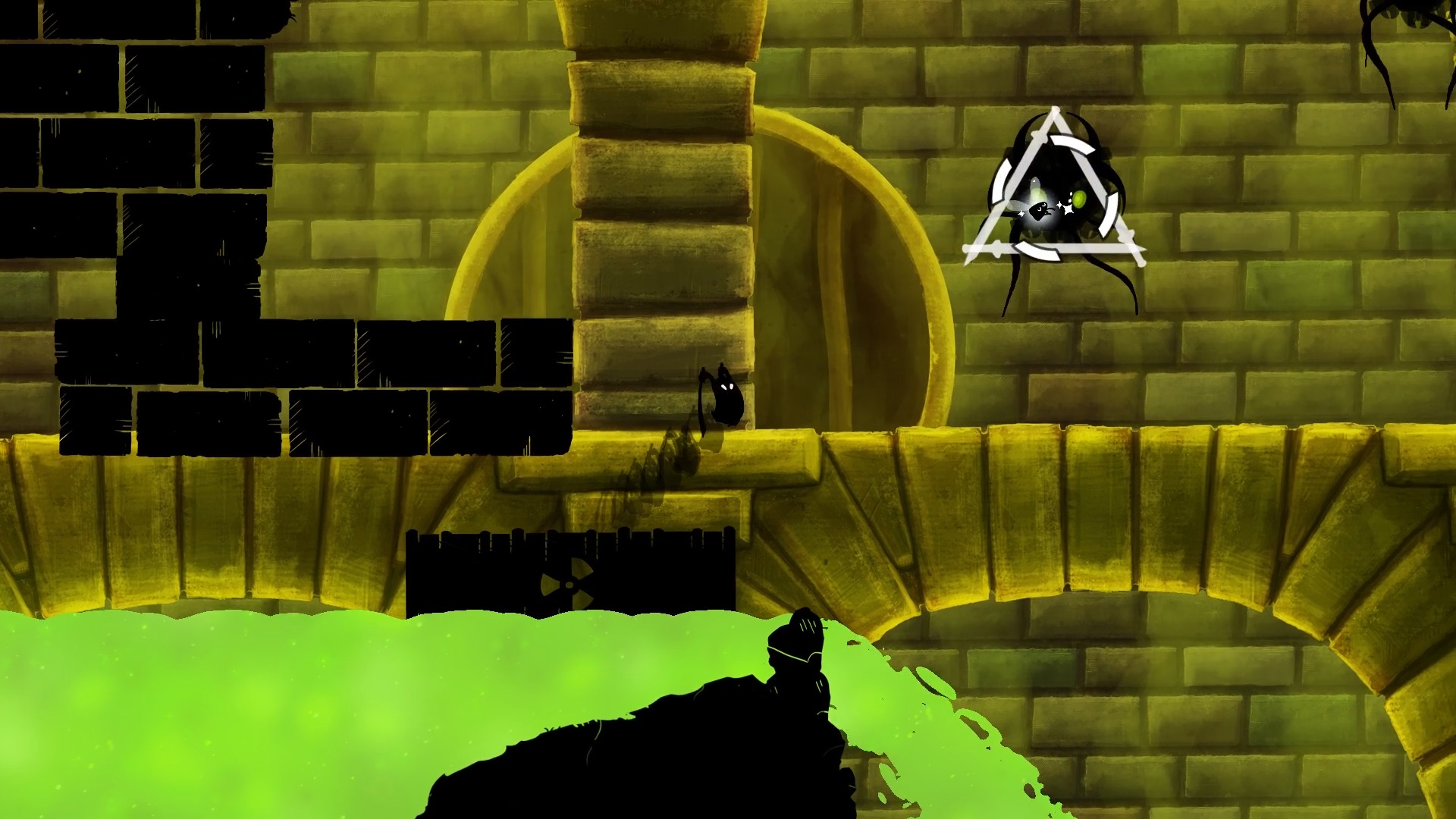 This may seem like a pretty neat feature, and at first, I certainly thought so, gladly taking on the various challenges each level provided. Heck, even the boss battles were no match for me – soon as I found out how to conquer each, that is. See, while the ‘attack to jump’ mechanic does make for a different experience, it’s almost impossible not to have it feel a tad restrictive at times. Which is likely my biggest gripe with the game, in spite of enjoying myself during the early bits.

At least regular enemies are as fragile as Shadow Bug‘s protagonist as one hit will slice them to bits, never to be heard from or seen ever again! Except that they all reappear mere seconds later. In most other genre entries this would likely be quite the hassle, but given the emphasis on speed and constant motion here – and the fact that enemies act as makeshift platforms – it makes perfect sense.

Now, while I did mention that the little ninja bug is able to somehow phase through solid objects to attack an enemy, this only applies to those coated in black paint. Spikes (red) and toxic waste (green), for example, are both lethal to the touch, and contact with either will send you back to the last checkpoint. Speaking of, these are actually sprinkled somewhat generously throughout each level, ensuring you’ll never have to retread much ground upon dying. Not quite the case with boss battles, however. 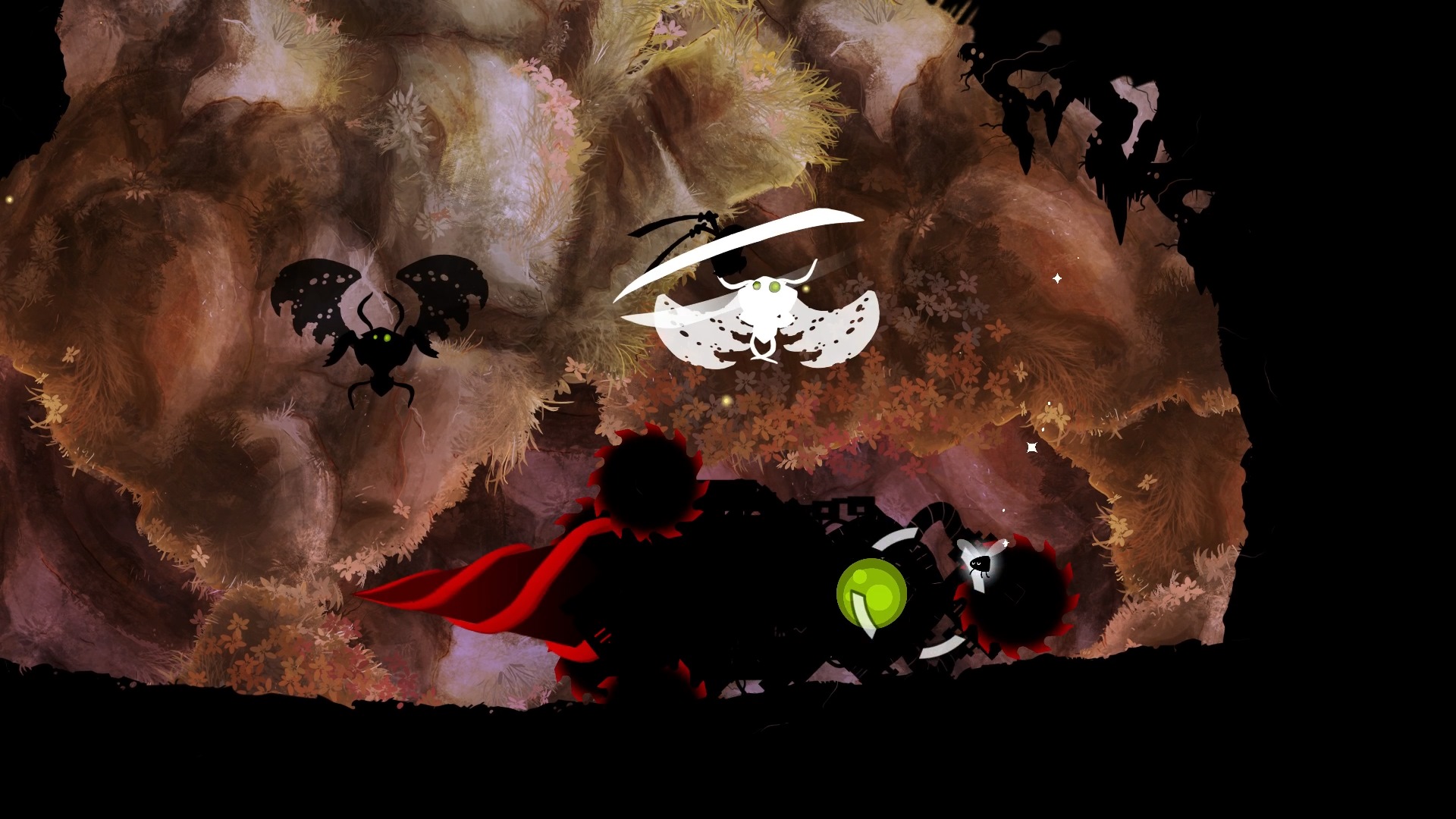 Even though these all have multiple phases, each of which ramps up the difficulty, one wrong move and it’s back to the beginning of the encounter. At least the fights are not cases of direct confrontation, requiring you to hit a weak spot over and over again. Quite the opposite, in fact, the three (of six) I squared off against being quite the varied bouts, each with their own clever twist.

Sadly, that was still not enough to keep me going, the third boss being the point where I gave up, uninstalled the game and decided to write this review instead of attempting to push onward. By then I had dealt with swinging sawblades, environmental puzzles, piranhas that thrived in ooze, disgustingly slimy hands and numerous other weird things that I can not even begin to describe. Quite the adventure, that was. Shame I lacked the patience and/or skill to see it all the way through.

Oh right, those looking for an extra challenge, the completion of each level nets you a neat little 1-3 star rating. One for clearing the level, another for doing it in a timely manner, and a third for collecting enough little glowy things. Not sure what those are, but hey, they’re… shiny? On top of that, leaderboards are also included, in case you wanna get competitive and show off just how quickly you can move through any of the thirty-six levels. Me, I was more than content to let someone else save the forest after experiencing a decent chunk of Shadow Bug.

All that said, would I recommend Shadow Bug? Well, yes and no. Those who thrive on challenging 2D platformers with little to no story and a strong emphasis on precision movement are likely going to have a good time. As for everyone else, probably best to give this one a pass.