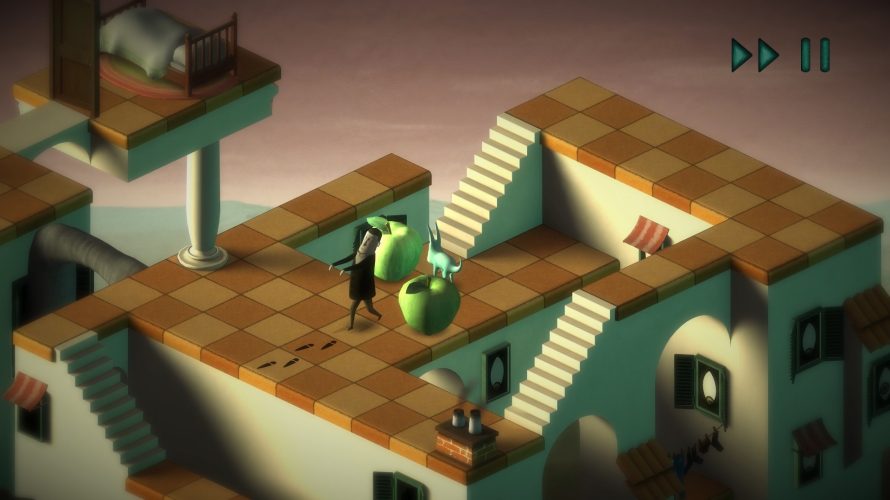 It is said that waking a sleepwalker can be dangerous. In Back to Bed, it can (and will) be downright fatal, seeing how if Bob wakes up… well, it’s because… he somehow got himself killed. Or you did, rather. See, rather than control the game’s protagonist, your job – as his guardian – is to help the poor guy return to the comfort of his bed; without falling over the edge, into black holes, getting smashed by alarm clocks, or other hazards.

To make matters worse, or at least more complicated, Bob is only capable of turning clockwise. Doesn’t matter where such a change of direction may lead. Upon colliding with any and all solid objects, he’ll immediately make a right. Oh, and he never stops moving either, so it is quite fortunate that his little guardian is rather fast on its feet. While pillars, chimneys(?) and other objects do help in trying to create a safe path for Bob to follow, they’re by no means enough.

Which is why one or more apples are sprinkled throughout each of the thirty levels. These are the only things that can be moved around, making them pretty much essential to progression. For without a direction-changing apple, Bob would simply plummet to his death, time and time again. Or worse yet, wander into one of the many environmental hazards! Why ‘worse’? Well, if Bob falls over the edge, he simply reappears at the beginning of the current level, leaving you free to work on his new path all the same. But should he collide with something else, the level will reset. Frustrating, to say the least, so best avoid that, eh? 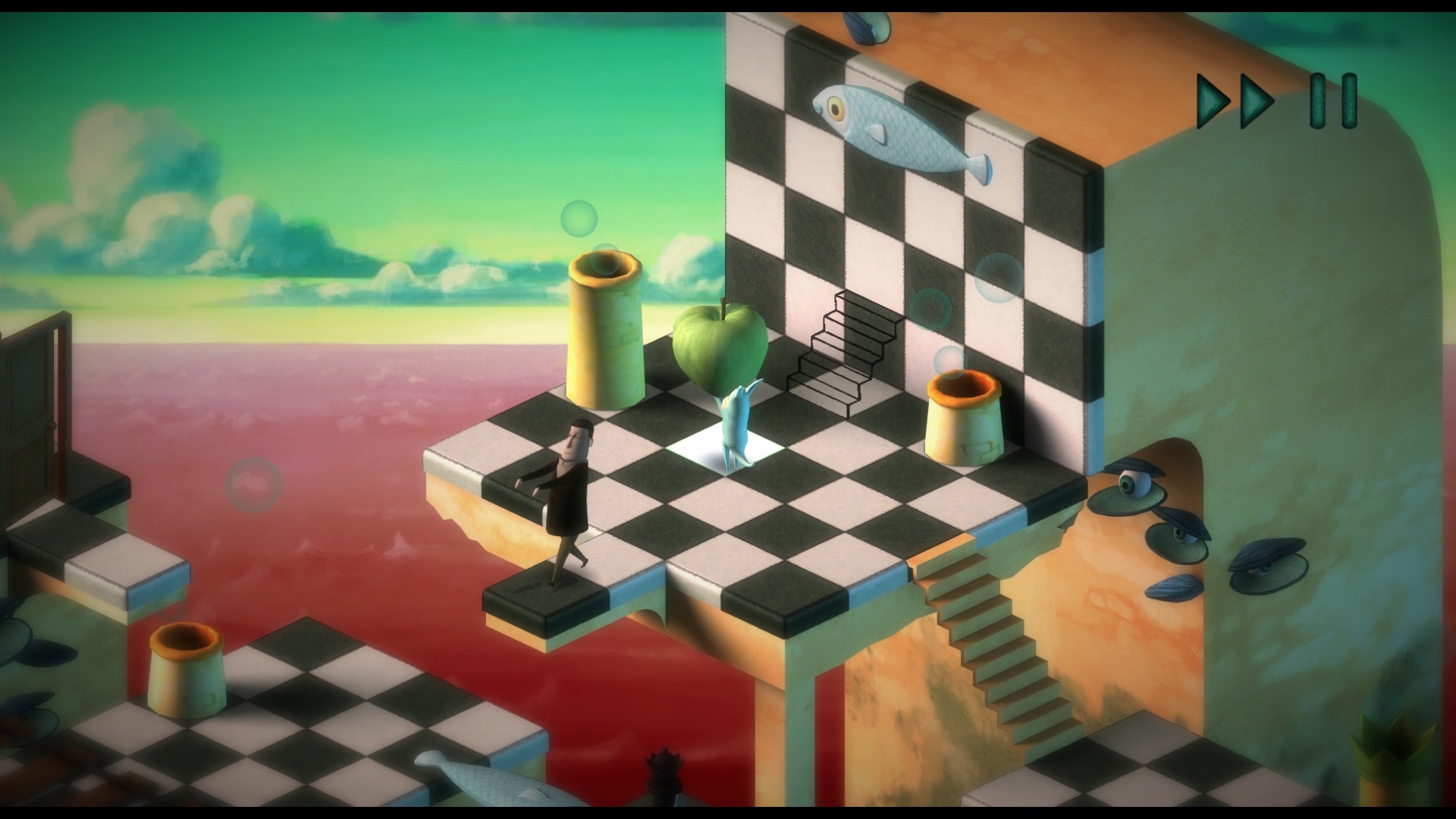 Speaking of the levels… it’s not often we get to traverse such peculiar environments in video games, every last one a surrealistic landscape of confusing architecture, stairs leading up walls and what-have-you. No, that last bit is not a typo, and it only gets weirder as the story progresses, perspective playing an increasingly larger part of the puzzle that is getting Bob, well, back to bed.

I absolutely love how different it all is though, even if navigating staircases and figuring out how to reach certain areas did prove a tad tricky, more often than not. At least the guardian is able to roam freely across the entire level from the get-go, even climb on top of the aforementioned apple (which is, oddly enough, downright required in certain scenarios). Ah, and unlike Bob, he can neither fall over the edge nor get smacked in the face by making contact with those pesky hazards.

Needless to say, this does make for an overall easier experience, and you know what? That’s quite alright, even if the first fifteen or so levels proved to be on the easy side. But once you get to the final stages, you’ll likely find yourself longing for those easy-going areas without black holes, dogs, alarm clocks, and other weird (and quite deadly) things to deal with. That said, these pests aren’t exactly the smartest bunch and as such, can be manipulated with a well-placed apple or two.

Gotta be quick about it though, for as I mentioned earlier, Bob will never stop. Not even if a collision is coming up. He just doesn’t care, I guess? Although a far more likely reason is that the poor fella simply doesn’t know what’s going on, eyes closed, arms reaching outwards, and such. Sleepwalkers aren’t exactly the most aware bunch, after all. Ah, if only there was a way to tell him to stop moving temporarily. If only. 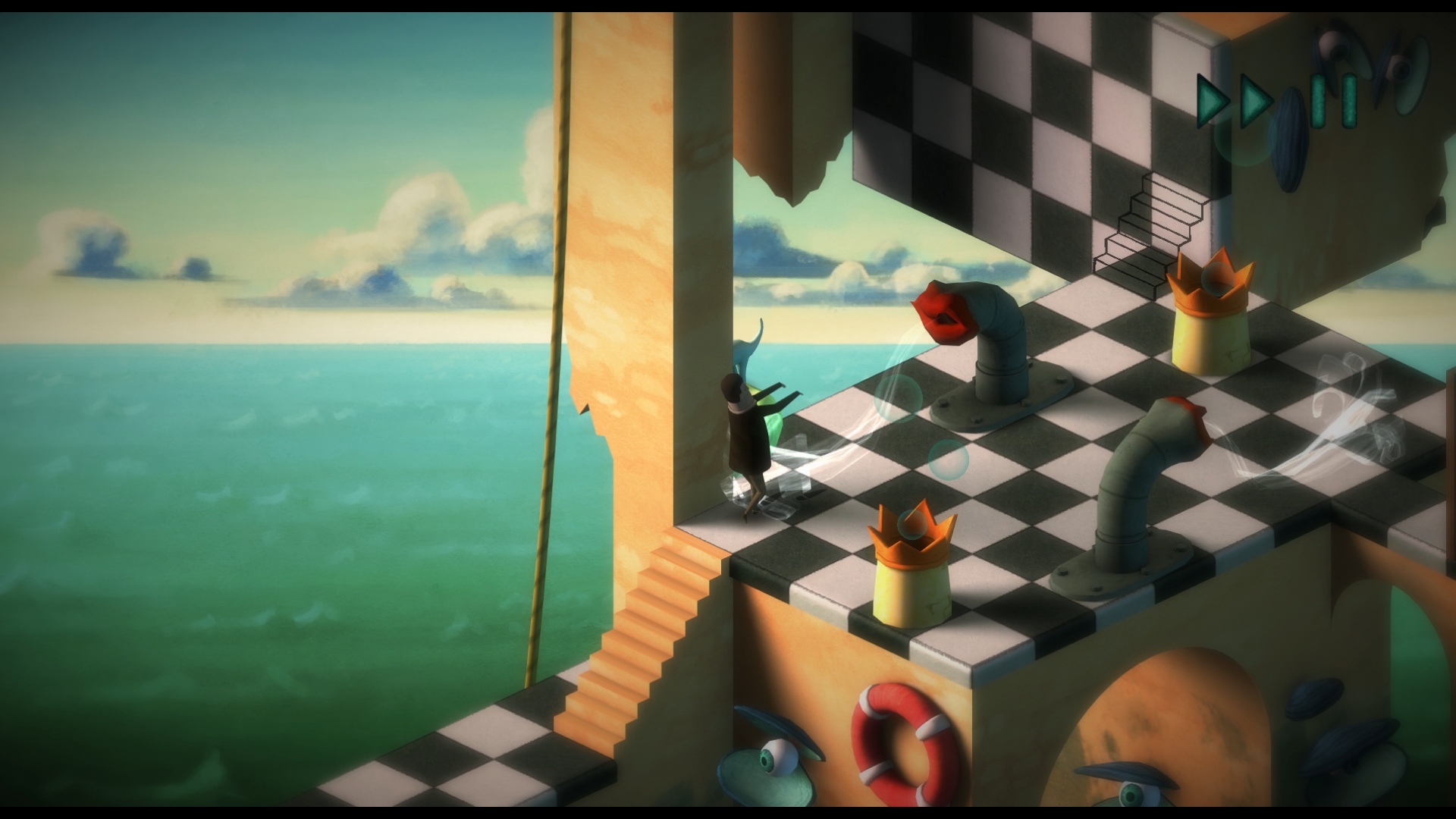 But alas, only one thing is able to provide a bit of breathing room, and getting Bob angled correctly for these windy contraptions to do their thing is neither easy nor worth the effort. For the most part. There were times when I would do my darndest to get him to walk head-first into one, leaving me free to deal with fish, apple, and dog alike. Did I mention how Back to Bed gets incredibly complicated late-game? And those are just the normal versions!

If you feel the need for a far greater challenge after completing Rooftop Trouble and Harbor Hazards, each of which houses fifteen fun levels of varying difficulty, you’ll definitely want to check out the nightmare versions. By the time the credits rolled I thought I had gotten pretty good at Back to Bed. I was wrong.

Try as I might, I was unable to finish even the first of these, as now, on top of returning Bob safely to his bedroom… he also had to pick up a key! Otherwise, the door simply wouldn’t open, poor Bob once again stumbling over the edge. An interesting addition, no doubt, even if only the most dedicated will likely end up conquering it. 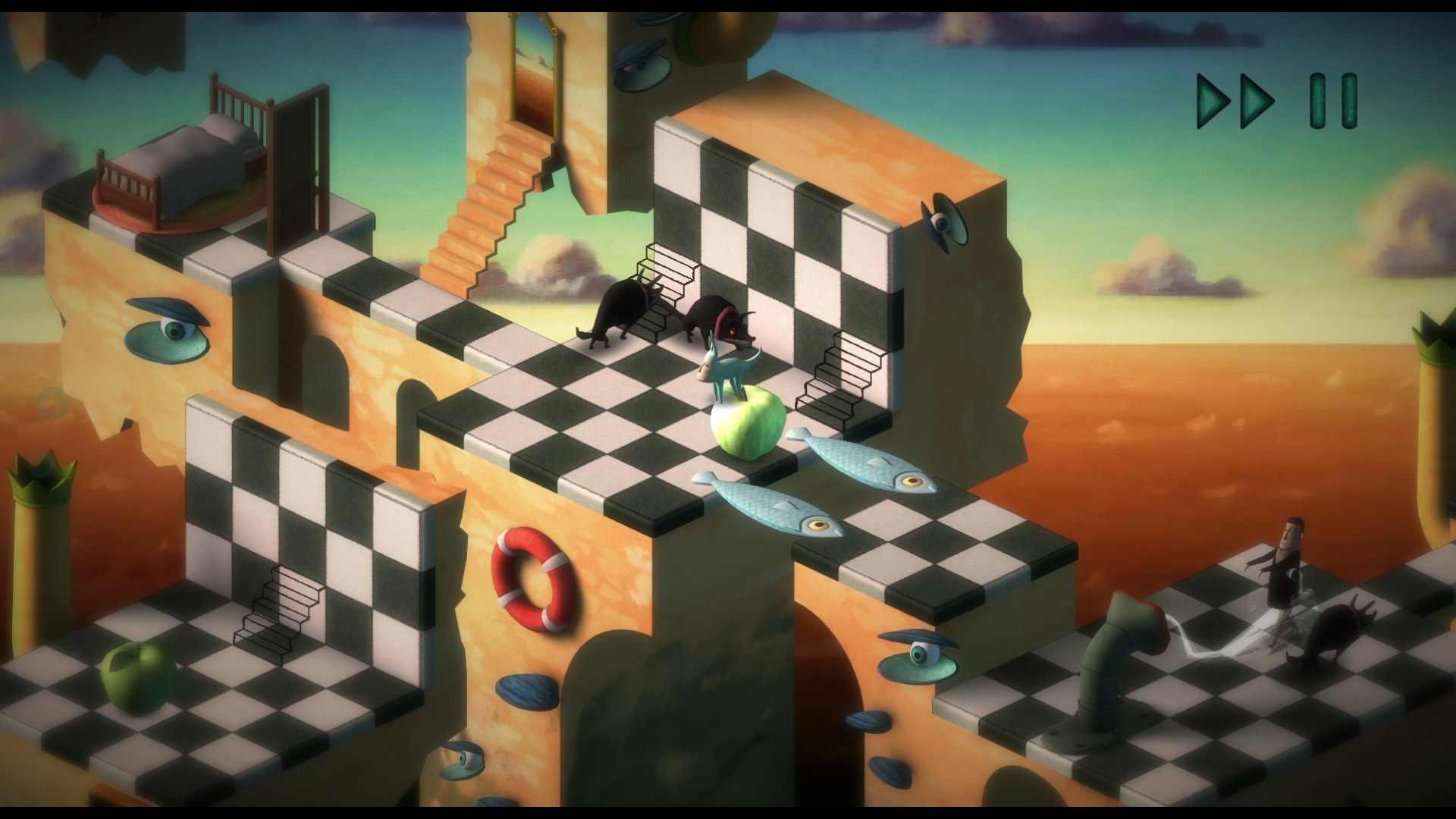 Same can hardly be said about the ‘normal’ levels, as there is even an achievement for clearing that particular lot in less than 45 minutes. Not one that a lot of players have in the Steam version at the time of writing, but still – it’s there, which means that this is by no means a long game. Heck, I’m not very good at puzzle games, and yet according to my footage, the whole thing was cleared in about an hour. So there.

Back to Bed is still a genuinely fun experience, however, even if it does fall on the short side of things (for those with no interest in the nightmare levels, that is), and one I would definitely recommend. Sure, it’s a bit of an ancient title at this point, dating back to 2014, but it most certainly doesn’t feel – or look – like a game from that long ago. Visuals are crisp and clean, the guardian controls just fine (save for those pesky staircases), and the cut-scenes… tell a story every bit as surreal as the game’s environments. Good stuff, for sure.