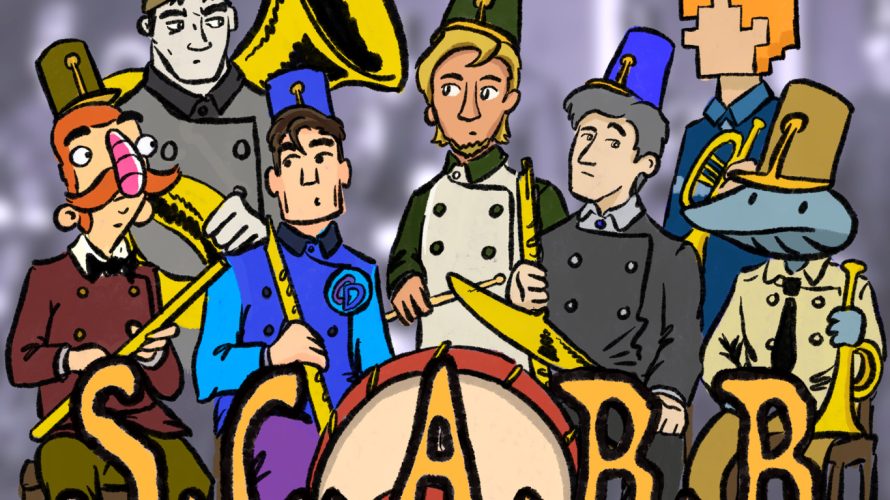 I’m sure you’ve already noticed simply by looking at the picture that… we are dealing with a not-so-Humble (get it?) bundle here. On top of that, only less than half of the lineup come with Steam keys! Still here? Great. That means you care more about quality indie games than that ever-growing Steam library, and with the likes of Captain Disaster in: Death Has A Million Stomping Boots and Adventures of Bertram Fiddle partaking, you should definitely care about this bundle too. So what say we take a look at the rest, while we’re at it?

But before we do that, I kinda feel it might be good to point out that were you to grab the two aforementioned titles separately, you’d be out $13.98, while you could instead get them with five other games for noticeably less ($9.99 to be exact) in SCABB (aka. the Super Comedy Adventure Bargain Bundle). Pretty sweet deal if you ask me, and the bundler(s) has summarized the lineup as follows, saving me a bit of work:

Yup. Hmm…. actually, let’s do the usual listing thing with the contents of SCABB – just for old times sake.

Adventures of Bertram Fiddle
In a quirky take on a Victorian London inhabited by mysterious, strange characters, self proclaimed leading explorator, Bertram Fiddle, finds himself in a bit of pickle. Help him follow the clues and track down the elusive serial killer known only as Geoff the Murderer before he strikes again.

The Beard in the Mirror - Launch Trailer

The Beard in the Mirror
What do you want to be when you grow up? Paul thought his life would be set after college, but at 22 he’s toiling away in a job he doesn’t like and coming home to an empty apartment every night. He doesn’t know who he is, where he’s going, or how he fits into his world.

But then on one dark and stormy night, a mysterious woman appears to him, and everything changes…

Legend of Hand
Legend of Hand tells the story of a hero on an epic quest to find the mythical Grandmaster Hand, the one man who can restore peace to a troubled world. Inspired by adventure classics, Far-East legends and martial arts beat ’em up games of the 80’s and 90’s, this point and click adventure will take the player on a unique journey through magical lands.

Captain Disaster in: Death Has A Million Stomping Boots
Captain Disaster takes a job delivering a package from Acturus-1 to Proboscis Major – not realising that he is actually transporting something that will put the entire galaxy in danger! Though just getting the package in the first place is quite a challenge in itself…

Our intrepid nitwit investigates interesting peculiar people, puzzling places and panicky problems along the way to saving the day, once he finally realises that something is wrong. Expect lots of laughs and head-scratching dilemmas before you reach the shocking conclusion and find out what all this “Million Stomping Boots” business is actually about!

Yet Another Hero Story Trailer

Yet Another Hero Story
A noble lady has been abducted and only a hero can save her. That hero shouldn’t be Martin McNish but life has an odd sense of humour sometimes.

It is your task to help Martin, become a hero.

Trails and Traces : The Tomb of Thomas Tew
In 1695, Tew and his fellow pirates pursued a Mughal ship. His ship, The Amity, attacked the ship, the Fateh Muhammed. Tew was disemboweled by a cannon shot, and died instantly. Or did he?

Clam Man
is the story of the Clam Man. Intriguing, isn’t it? Yes, it’s true – he is a clam and yet also a man. This is not a topic of debate, it is fact. We’ve confirmed it while working on this game. Using science.