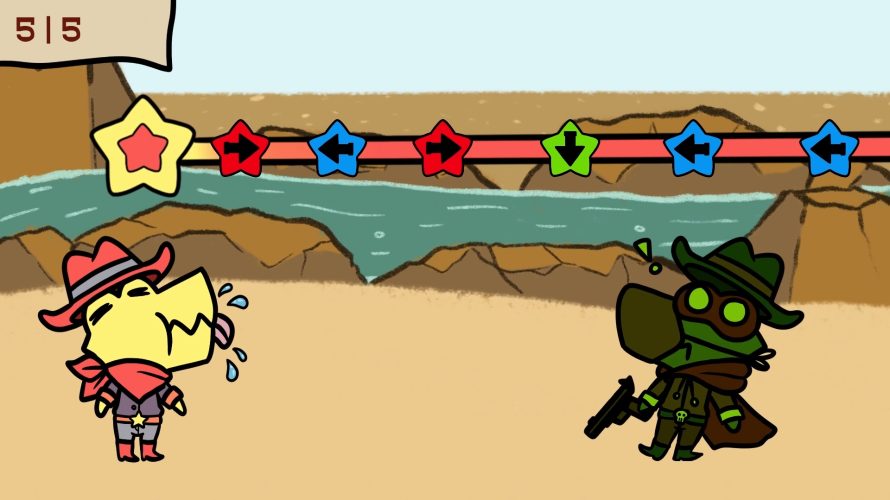 There’s no denying that the wild west is pretty much synonymous with gunslinging at this point, and yet, this game has none of that. Sure, the bad guy in each duel is armed with a sixshooter, but if you play the rhythm game that is Rootin’ Tootin’ & No Shootin’ properly, no shots will be fired, the crook will give up, and another will take his place. Now imagine if the real deal was like that…

Alas, dueling like this is only found in video games for reasons that should be obvious to just about anyone. Shame, but at least there’s fun to be had, trying to match the directions in a timely manner so as to avoid taking a bullet. At which point the entire thing will start over, your highest number of outgunned (or outwitted?) gunmen shown next to that of your current run, forever taunting you in a “surely you can do better than this” manner.

Howdy there, stranger! Welcome to Gatorstone. This here town’s a quiet little place. We mine and farm and mind our own business. But lately those Marsh Gang Rebels have been terrifyin’ the townsfolk out there among the willows and causing all sorts a hullabaloo!

Seeing how I never made it past five masked marauders, I am unable to tell ya whether the pace picks up significantly once you enter, say, double digits. I do hope so though, for the early (ie. 1 through 4) didn’t put up much of a fight, even if the button presses did appear closer together after the first few encounters. Perhaps there will even be ‘held’ prompts later? Then again… not likely, seeing how each well-timed press triggered an audible reaction from the game’s protagonist – often in the form of a “Yee-haw!” or “Howdy!”. Yeah.

So, who’s up for disarming a bunch of hostiles with fancy well-timed keypresses?

Rootin’ Tootin’ & No Shootin’ was made for/during the 6th Alakajam (48-hour game jam) and is available for free on itch.io and Game Jolt.