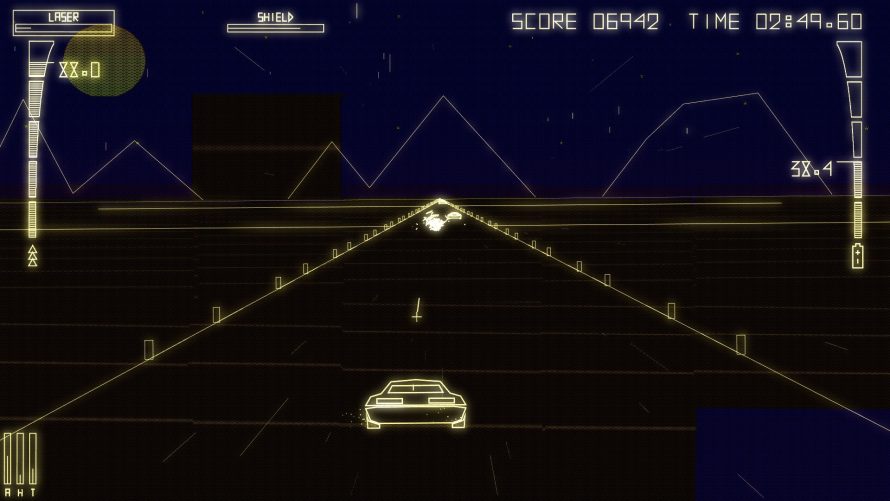 Do you remember the year 1978, how Byte Driver appeared in arcades and quickly became a major quarter-sucking hit? Probably not, because it didn’t happen in our world. But in the game’s world, this and so much more happened in the years following… including the termination of the last known Byte Driver machine in 1981. Fret not, however, for thanks to Vector Hat you will soon be able to relive the glory days of vehicular hacking. And racing. And hacking. And more hacking. Well, you get the gist.

So, energy. You need energy. We all need energy. Cars too and those in Byte Driver are no exception. How do you get it? Easy: hack other drivers! Hack everyone! HACK THE PLAN – ahem. Anyway, run out of energy and it’s game over. As such, be sure to keep hacking and, but at the same time, keep your eyes on the road. Always. You’re not the only one trying to get ahead after all, and unsurprisingly, every other driver on the road is out to get you. The hacking aspect is used to replenish weapons as well, which means you have two reasons to keep at it while doing your best to navigate an incredibly “sharply twisting road”.

The faster you drive, the higher your score. The further you go, the more dangerous the road gets. Drive fast. Hack your enemies. Fight for your life. Survive if you can.

Difficult? You bet. Ah, too difficult? Just turn on ‘No Stress Mode’ then, and enjoy a stressfree journey, blow up cars left and right with naught but a care in the world. Then, when you’re in the mood for something more chaotic, disable it again and get ready for a return to edge-of-your-seat action. Your car, your road, your rules. Good luck, Byte Driver.