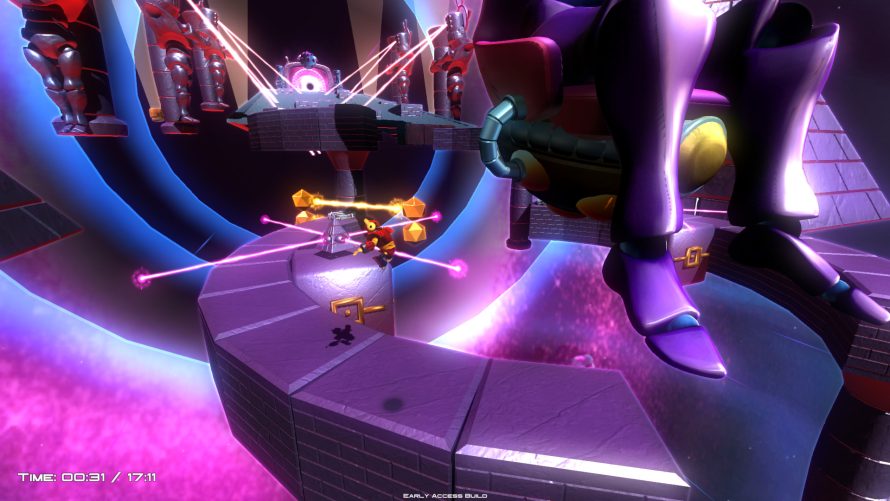 So… there’s trouble brewing in Rogue Singularity and not the kind some brave hero is going to whisk away either, so much as, well, ignore it while running for the proverbial hills. Unless you, as the game’s “plucky little robot” protagonist, are looking to lose your footing and fall into the endless void as everything collapses around you? No? Good. Better put your best foot forward then and get to running. Fast. Really fast. Like, super fast.

While I’m not exactly of the mind to simply dash in the opposite direction of trouble in video games, this one does make a compelling case for doing so, procedurally generated levels and all. But even though the levels are randomized, they still have leaderboards (wait, what?). I know how crazy and nigh impossible that sounds, but it does make sense as once you’ve cleared a level, you can share it with the rest of the community -- likely in the same vein as seeds for generating specific worlds in Minecraft. A pretty neat inclusion if you ask me and on top of that there’s the weekly challenges as well as a genuinely funky “hybrid chiptune-electronica soundtrack” by Derris Kharlan (Time Surfer) to really get ya into the groove as you run along.

A wandering black hole – a rogue singularity, in fact – has crashed into your star system, turning countless worlds into floating debris.

Ah, but you see, as one might suspect, it’s not all about running and jumping here, hazardous terrain making for some truly troublesome precision platforming. Although if the trailer below is any indication, chances are the difficulty won’t ever reach rage-inducing heights. I hope. Oh, and how about some (light?) puzzle-solving for good measure? Seems you really gotta think on your feet here -- or off, as you fly through the air in a mad dash towards that ever-elusive finish line. Only to start all over again as the next level begins. Because such is life in Rogue Singularity.

Rogue Singularity is available on Steam and Switch, carrying a $14.99 price tag. Soundtrack? Bandcamp, with a $5 price tag.

Rogue Singularity - Launch Trailer
Watch this video on YouTube.
Facebook Twitter LinkedIn Pinterest Tumblr WhatsApp Telegram E-mail
Previous article By the Power of Picross: 'Pixel Puzzle Makeout League' is in the Mood for Superhero Romance
Next article Will You Serve Royalty or Forge Your Own Path in the Vast Open World That Lays Before You in 'Queen's Wish: The Conqueror'?