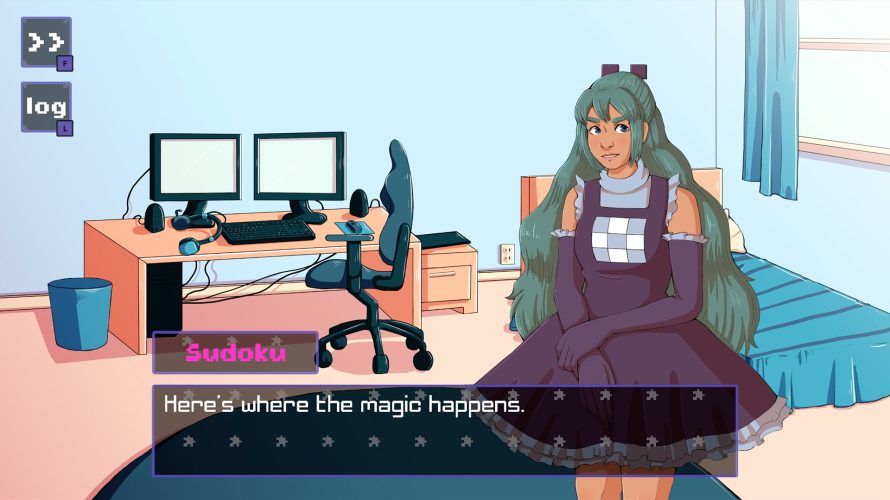 I know, I know. “Dating sim? Ugh. Another one of those.” But hear me out, for something tells me this is not at all like any other genre entry you might have played (or ignored after a glance or two, for that matter). Unless of course, you’ve already experienced one with a superhero protagonist who solves problems by way of picross? Yeah. Didn’t think so, and while it may sound just a tiny bit odd, well, that’s Pixel Puzzle Makeout League in a nutshell. Groovy stuff.

Oh, and not just picross either: crossword, sudoku, chess, and jigsaw puzzles also make an appearance. In the form of (very) unique superheroes. Who needs those silly super realistic dating sims anyway when you can experience outlandish stuff like this instead? Heck, you even get to date a giant puzzle piece – if you play your proverbial cards right. And while we’re on the topic of dating… something tells me those will also be, you know, actual puzzles. Much like in real life. Which means there’s a hint of realism to this one after all. Realism which is thrown out the window moments later when the protagonist realizes their choice of date is based on a type of puzzle, right down to her characteristics and appearance.

You are Pixel Girl, a superhero with the power of “pixel puzzle-solving.” Turn your problems into picross, then solve ’em to save the day!

All that said, given the choice of Sudoku, Chess, Crossword and Piecea, who’d you pick to pursue in Pixel Puzzle Makeout League? Alright so that’s a bit of a trick question, seeing how you’re free to go on a date with every last one, and multiple times at that, “before the Villain third-wheels you with his doomsday plot”. Whatever that means. Probably just more puzzles to move the plot along, as you go about hitting on puzzle girls, visiting exotic locations like, oh you know, the center of the Earth. Because why the not, in a game such as this?

Pixel Puzzle Makeout League will be on Steam come summer 2020.