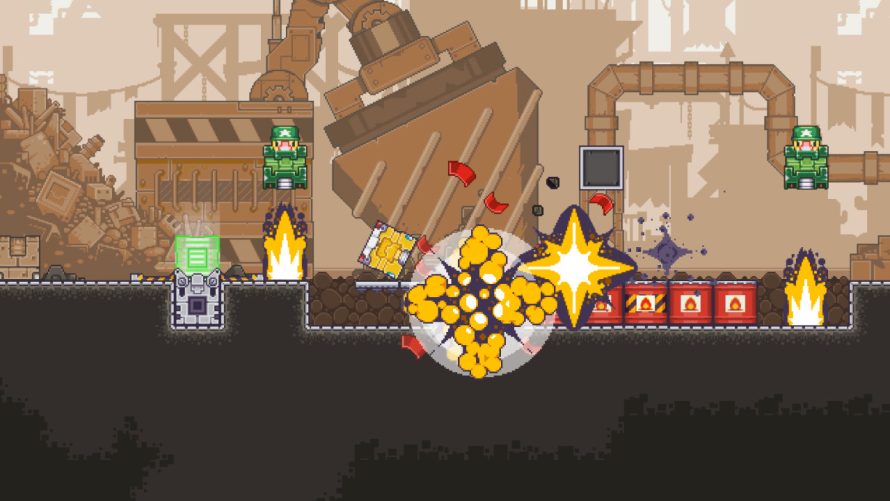 Guns don’t kill people. The Gunbrick kills people. In Gunbrick: Reloaded. People, mutants, and… well, whatever else may stand in the way of this here square(d) protagonist. Sure, there are puzzles too, but surely the focus is on the action, right? Why else would the player be given a gun and a shield, after all? Why indeed. To flippin’ ROCKET JUMP, of course! YEAH!

Seriously though, the shenanigans depicted in Gunbrick: Reloaded are definitely of the ‘don’t try this at home’ category, and on so many levels at that. Which basically means they’re perfect for a zany video game in which it’s hip to be (a) square. One seemingly more than capable of crushing and blowing up everything in its path, solving the strangest of puzzles and… well, so what if a group of innocent bystanders end up perishing in the name of progression? The only way is forward! Rock and/or roll out!

The Gunbrick – A gun one side… a shield on the other.

Oh, and in case that samey 2D perspective isn’t doing it for ya, better get to unlocking the hidden levels in which an all-new perspective (no, really) awaits. Whenever you’re not busy rolling all over the place, making a name for yourself by flipping off law enforcement. Again, definitely not something to try at home. Unless you’re eager to end up in a place where you won’t be able to play Gunbrick: Reloaded, or anything else for that matter. Did I mention how there’s a crazy epic chainsaw deathmatch somewhere in the game?

Gunbrick: Reloaded is available on Steam and Switch. Soundtrack? Bandcamp. Trailer? Below, as always!